Lily has been a fan of Wow Toys since she was about 1 years old when she got her first wow toys cars. I am so pleased that 2 years later she still plays with them. Not only that but they are all in one piece and have lasted being thrown around and played with loads.

Lily has been a Wow Toys tester since around 2 years old and so now she now has wonderful collection of vehicles. So when we found out that Wow Toys had brought out a train we asked if they would like us to put it to the test.

So they popped one in the post for us and not long after it arrived at out door.

Lily was so pleased to see that she had something new from Wow Toys to play with, as soon as she saw it she started to play with it, that was before I even got it out of the box. She even happily posed for a picture with it she was that impressed. 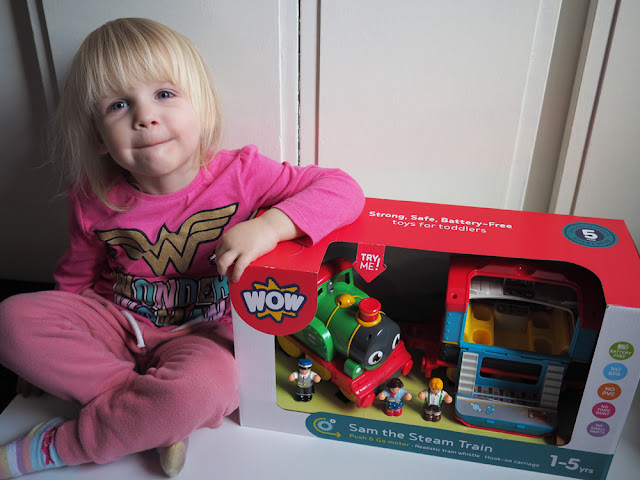 One thing I noticed straight away was that Wow Toys have new packaging. I have always loved the old Wow toys boxes as they were always really colourful with their bright red design. I could always spot them in the shops if they had them in there. I think the new packaging has a more up to date look, which is clean but still slightly colourful. I do like the little motor symbols on the front that show the train has a push and go motor. The boxes are now also open so then the child and parents can try the toy before they buy. It also had a little hole around the side which gave another peek at the train which I thought was good. Listed down the side in colourful circles are also all the things that make wow toys great toys and perfect for kids.
Hopefully I shall still be able to instantly spot them when in shops. 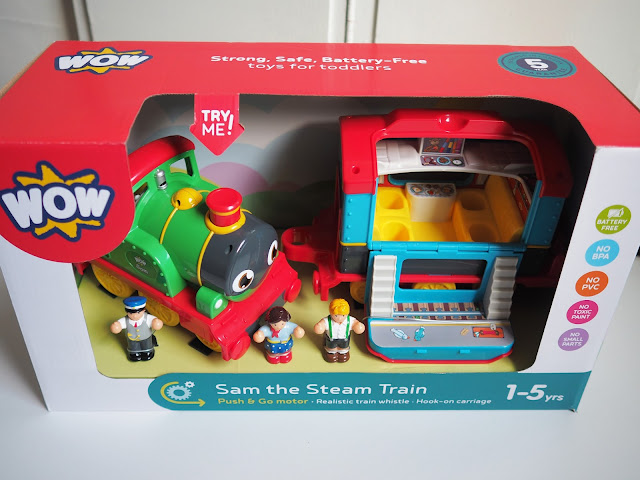 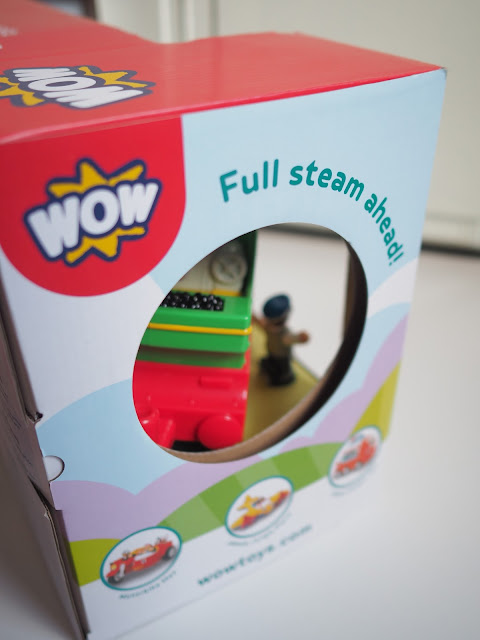 I love that Wow Toys have brought out a train. Trains are so popular with children and Lily loves them. Wow toys have gone all out with the design of this train. It comes in 2 parts, the train engine and a hook on carriage. The train itself can seat 2 people who could drive the train and the carriage has 4 seats and even has 2 beds. The set comes with 3 figures that look to be the driver and 2 passengers. The carriage opens and they have designed it so it looks like there are steps coming from a platform up onto the train. I think this is very clever. They haven't missed a detail. There are birds on the platform, food on the table inside the carriage, and all sorts of control detail inside the train itself. It is all done so nicely and looks so colourful and fun. It all really helps aid children's imaginations when playing.

The one thing I have always loved about Wow toys is how the vehicles all have faces on the front. I think that this really makes the toys child friendly and just makes them really happy playful looking toys.

Wow toys are really made so that they are kind to our children using non toxic paint No BPA and no PVC and they have made sure there are no small parts for choking. This makes them perfect for children aged 1 to 5 years old. 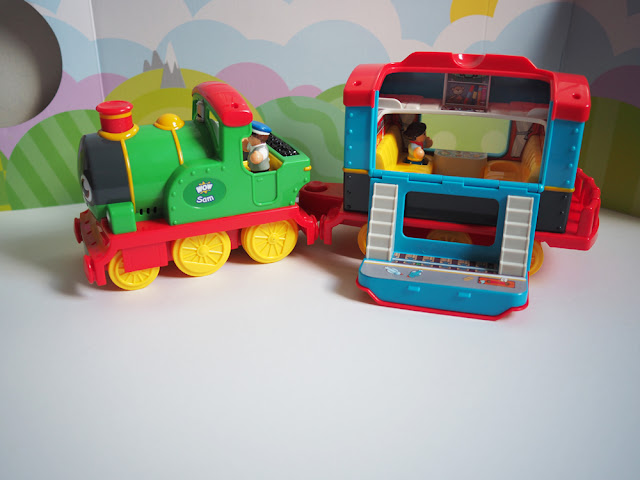 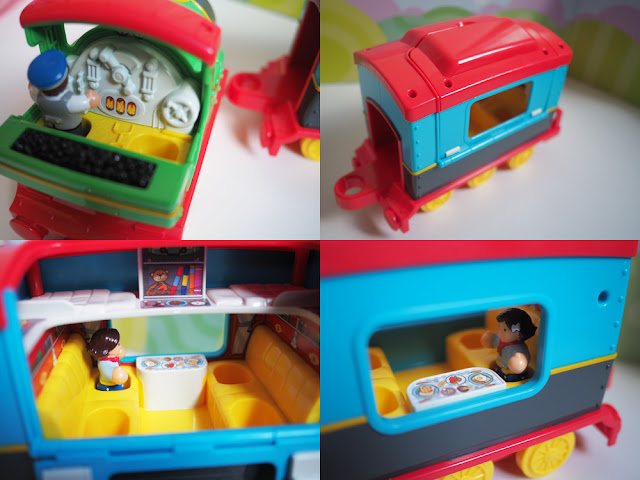 Lily loved the train. She loved putting the characters in and she loves pushing it along. She loves using her imagination and now she is 3 years old its great to see her making the characters talk to each other.
The toy doesn't need any batteries but has a motor so when pushed it carries on moving along the floor when you let go.
Anything that works so well without batteries is a real plus for me. The worst is when they really want to play with something but the batteries have run out and it doesn't work anymore until you get new ones. Generally young children really don't understand the concept of "it needs new batteries". So the fact that this toy is going to be always working for Lily is great.

Lily really enjoyed that this train went toot toot by a simple push of the engines chimney. Lily isn't a big fan of loud noises and so the fact that its only a simple toot when she presses it is great. She prefers that to if it made a loud toot or even louder noise like music.

Lily has been playing with the train lots and its great to know that I can leave her to play with it alone and no parent supervision is needed for it. We did come across one problem though and that is that when the carriage door is closed, it is VERY hard to pull open again. Lily couldn't do it and even I struggled too. I am hoping and thinking that the more it gets played with that the more it will loosen up. 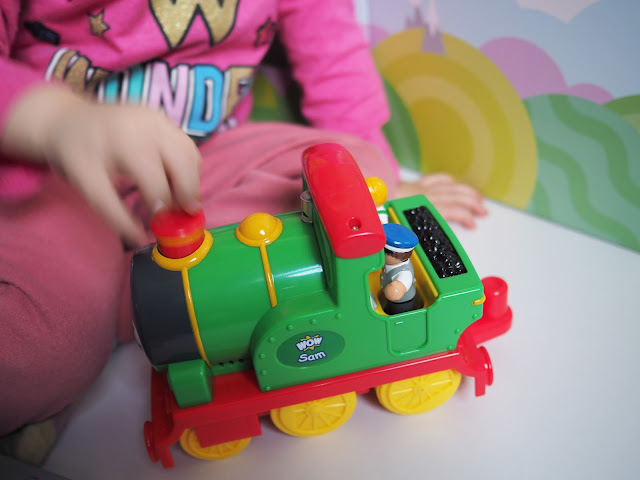 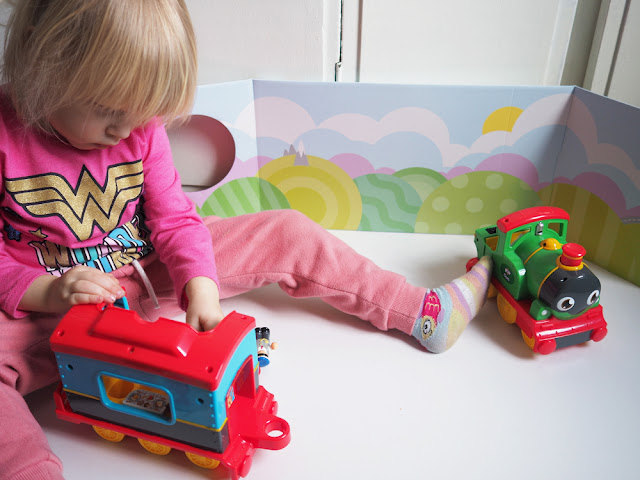 The train is £34.99 and is money well spent as I know that Wow Toys really do last and also don't break easy.

Head to the Wow Toys Website to find out more and also find out where to buy it.

What do you love about the New Wow Toys Train?

Im so excited to say that I have one Sam the Steam Train to giveaway to one lucky winner! Enter on the Gleam app below for your chance to win.

Win a Wow Toys Sam the Steam Train
Posted by LilysLittleLearners at 16:23