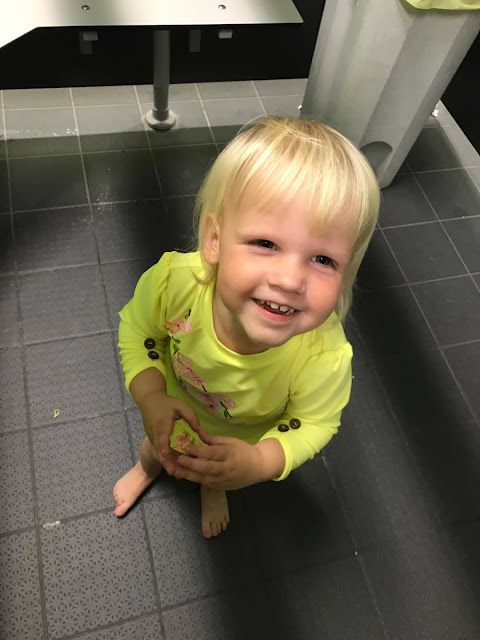 I used to take Lily swimming all the time when she was a baby. It was around when she turned a year old that she started to hate the swimming pool and the pool we was going to was always really cold. So... we stopped going.

If you are a reader if my blog you may know that Lily has always hated water, she does not like having a bath, won't put her hands in tubs of water for activities such as bath the baby. She really won't put her feet in the sea when we go to the sea side and so I had lost all hope of doing those fun activities with her.

It was a few weeks ago when on holiday that things started to slightly change. Lily wouldn't go in the sea but she happily would paddle in some of the pools of water that were made on the beach from the tide going out. She also happily played in a paddling pool. (After a lot of convincing though)

With seeing her improvement with water I decided that it may be time to try swimming again.

I found a pool that was only a train ride away that as well as having a toddler pool it also had a little splash pool. This would have gone to nearly knee deep for Lily and so was more like a paddling pool than a swimming pool. Perfect for her introduction back to swimming. She was a little unsure at first, and wasn't liking that her bum was getting wet as she slid down the slide, but as soon as she had gotten over the fact that she was going to get wet, she loved playing there.

It was great for her, there were watering cans for her to play with, a connect 4 game, a water feature where you stop and start the water flowing through the pipes. Little fountains to run through and bubbles. By the end of it she was loving the paddling pool

I did try her in the toddler pool. She was quite happy lead on a float on her front as I pulled her around. But without the float and even though she was wearing arm bands, she gripped to me for dear life. I did let go of her right at the end to show her that she could float, but her mouth dipped slightly under the water and after a mouthful of pool water it was game over and she wanted to go home.

But I must say that it was a really successful first trip to the pool. She said she enjoyed herself and she says she would like to go back. I am definetly going to try and make it a more regular thing.

Do your children enjoy swimming? What age were they comfortable with the pool?
Posted by LilysLittleLearners at 21:40