Our Day out to Blackpool

This post may be a little more picture heavy than word heavy, but It was a lovely day out and got some lovely photographs so wanted to share them with you. I always think nice days out are great to write about also so then I can look back in the future and remember the lovely time we had.

It took around an hour to get there and we arrived and the first thing we decided to do was eat. It didn't take us long to decide what to eat and we got fish and chips from the stall at the front of the pier. We thought it was going to be really expensive with it being on the pier but it wasn't. £3.50 for fish and chips isn't bad at all. I gave Lily some of my chips and fish. She loved the fish and ate it all. I was super happy to see her eat it as sometimes she can be fussy if it has changed shape from her normal fish fingers she eats.

The next thing we planned to do was walk down the pier. But we couldn't do that until Lily had sat in most of the little rides along the front. They were all £1 each though for a little ride on it and so she didn't get to sit on them all moving. I'm most definetly not made of money.

I don't have many photographs of Lily looking into the camera, she has her days where she just really wont look at it and this day was one. 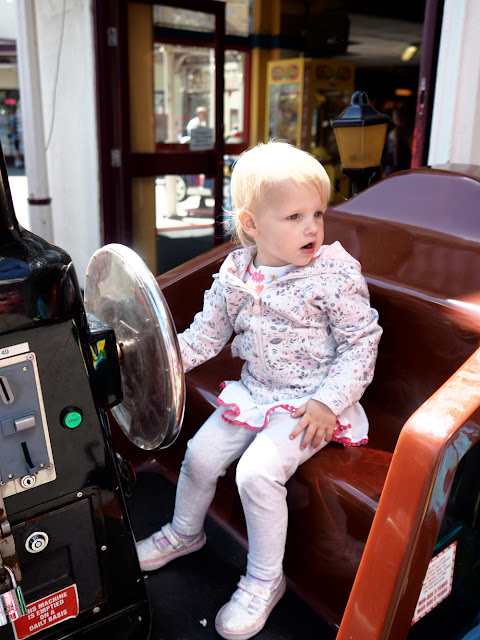 When we got to the pier, Lily found a train which really impressed her. We got a photograph in front of it and then suddenly it set off and went to the end of the pier. When Lily saw it leave she was upset because she wanted to go on it. So we walked all the way to the end of the pier simply to get on the train and come back haha. But she enjoyed the ride and thats all that mattered. (Ignore the worried look on her face, she was a little upset daddy didn't get on the train, but one of us had to stay with the pram) 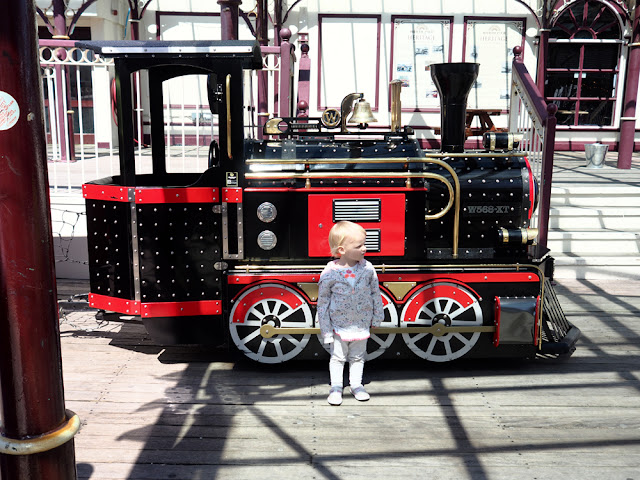 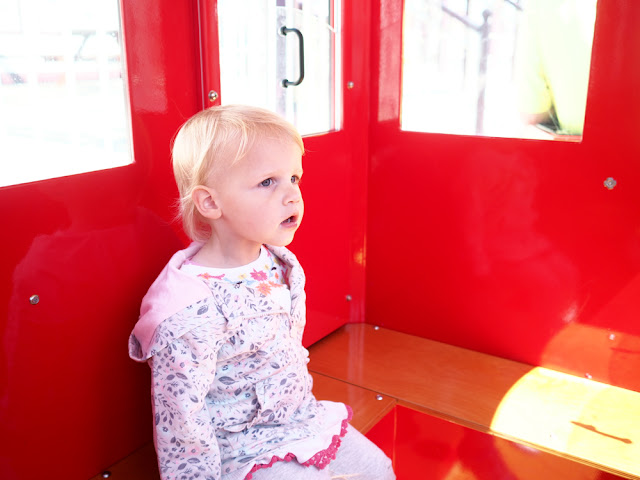 After this ride, we headed to the beach. The beach is now one of Lily's favourite places to go and she loves playing in the sand. She spent ages digging, building sandcastles with daddy, pouring the sand through her sieve. She even had a walk to the sea with daddy but thought that the sea was to cold to paddle in. 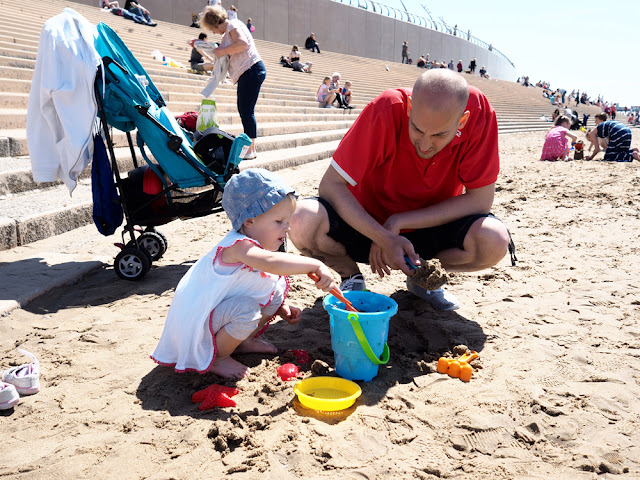 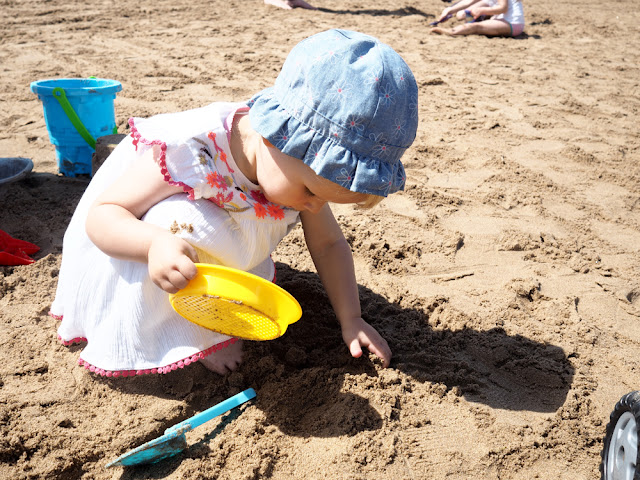 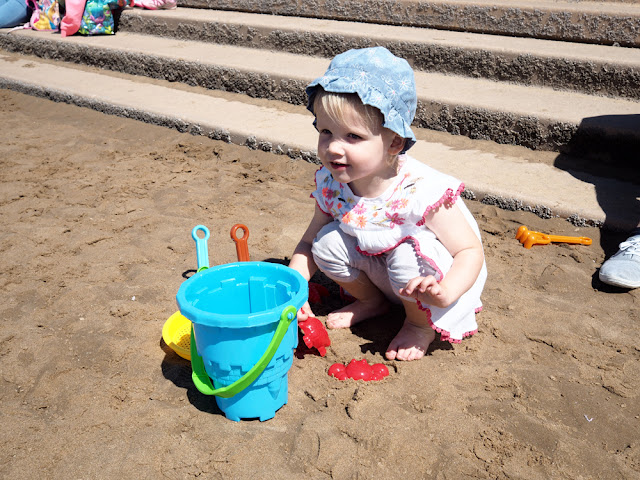 Our Beach time got cut short with the sea coming in and before we knew it there was hardly any beach left. So we packed up and headed up onto the pier for ice cream. Lily chose chocolate. The yummiest flavour but the messiest for when wearing a new white top. But aw well, couldn't say no to chocolate ice cream just to save a top. I also have some wonderful stain cleaner at home that lifted it right out.

After Lily had got the ice cream everywhere, we decided to change her top and head to an arcade. We had to give Coral Island a visit. We found this fun picture opportunity at the front entrance. Although as I said before, Lily was not wanting to look at the camera today. 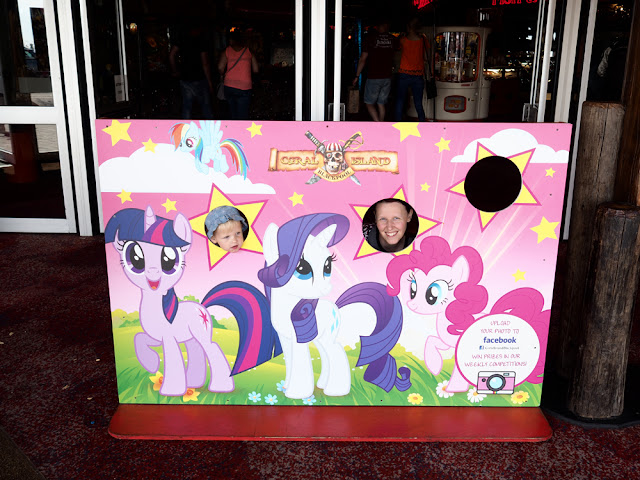 Lily was so impressed with the inside. As was I. Its so cool with all the treasure themed displays and the ride that is going around the top of the arcade. I let Lily play on her favourite machines. The 2p machines and she just loved hitting all the flashing buttons. We also tried to win her a paw patrol toy, but after spending only a few pounds we gave up and later headed to the shop to buy her one. 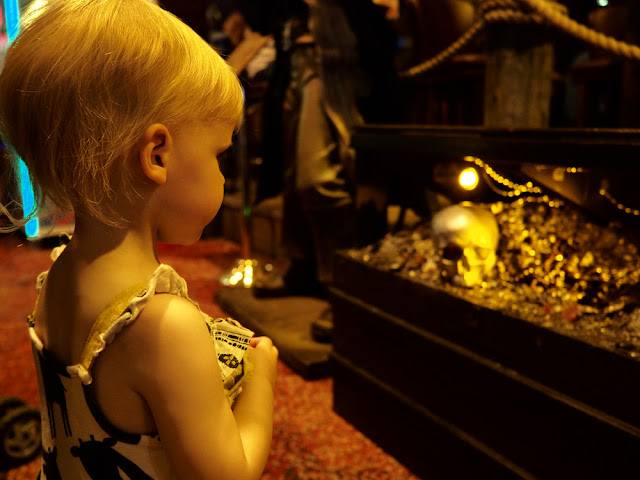 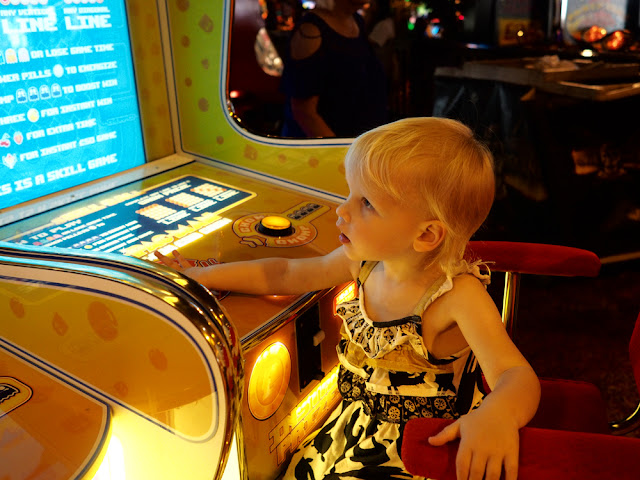 We had such a great day out and will definitely be visiting Blackpool again soon. We just need to make sure we head to the beach a little earlier before the sea swallows it. This will always be a lovely memory of a family day out.

Have you been to Blackpool before?

Check out this amazing Street Photography!!

Posted by LilysLittleLearners at 21:26