Its getting much colder outdoors recently, even though its getting closer to spring. I do find myself trying to wrap Lily up as warm as possible. She is at the age where she is noticing the cold and asking to go indoors when i'm trying to get her that all important fresh air.

So when I found out that Funky Giraffe did scarves I just had to review them.

But Funky Giraffe don't just do any old scarf. They do what is called a Scood. A Scood is a alternative to a scarf and a snood which keeps your child warm but also safe.

Safety is definetly one thing we all think about as parents and its great that a company has thought of an alternative to keep away the dangers that could occur with a scarf.

Funky Giraffe let me choose 3 designs from their website.

I chose the Black, Green and Orange Apples Scood. The Cupcakes Cotton Scood and the White and Pink Reversible Scood. 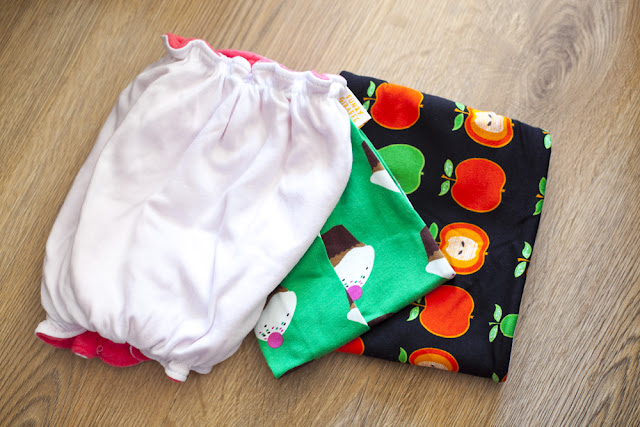 I really loved the designs of these. Both the Apples and Pears and the cupcake design are really eye catching and the colours of them both really compliment Lily's red coat. Lily loves pointing out the fruit on the one, and that there are cakes on the other. The other design is quite plain but it has its extra quality that it is reversible.

The first one we used was the apple and pear design. You can also get this design in a blue and green colour. The material just like the Funky giraffe bibs and is really soft and this scood has a really nice thickness to it. The inside is super soft and the way it is made safe is by it being fasted by Velcro. Having the Velcro on it comes with its pluses and minuses with the fact Lily can take it off herself when she gets in from outdoors but she can also take it off outdoors when I want her to keep it on. 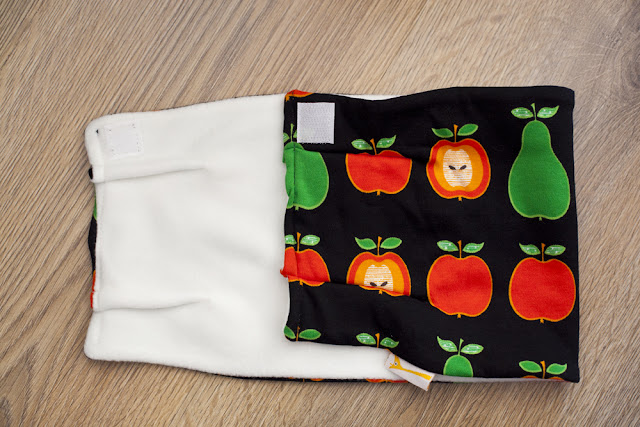 I placed the scood on Lily, but must admit, I wasn't 100% if it sat how it was meant to. I didn't mind the way it sat though and it looked nice on her and fit well. The way it sat would also keep her chest warm as well as her neck which is a good thing. It did look quite big on her though. I did find that when she was wearing it and moving around a lot it would slightly gap at the front as it fell forward leaving her neck exposed and I would then have to reposition it. Out of the 3 scoods this one has been my favourite. 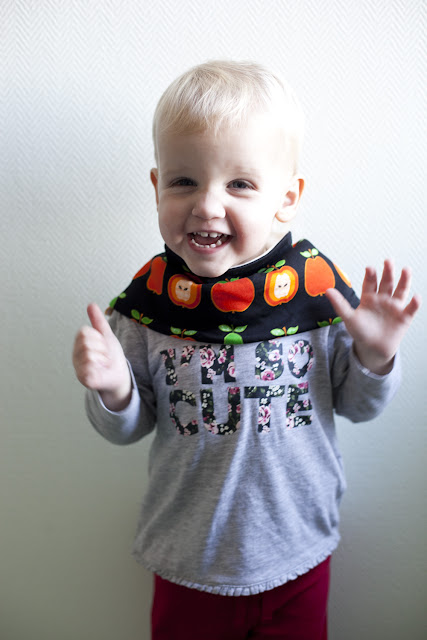 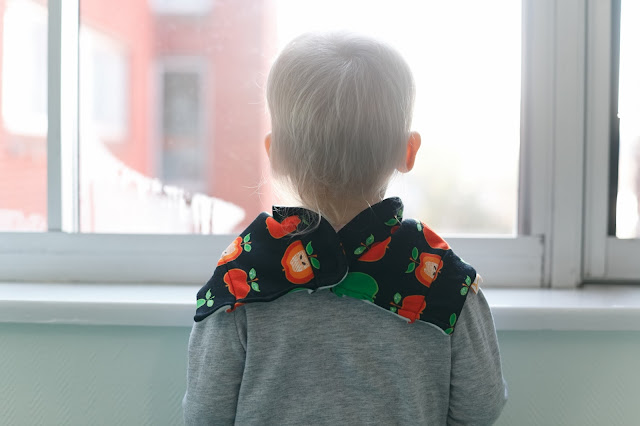 The second Scood we tried was the cupcake one. This one is a lot thinner than the Apple and Pear one and doesn't have the soft lining that the other one has. This is definetly more a scood for a cool day rather than a really cold one. This one is also connected with a press stud instead of velcro. Out of the 3 this was my least favourite. Although I love the design I didn't feel that it sat or fit very well on her and kept falling forward leaving a big gap and so I didn't feel like it would keep the cool drafts away from her neck and chest. 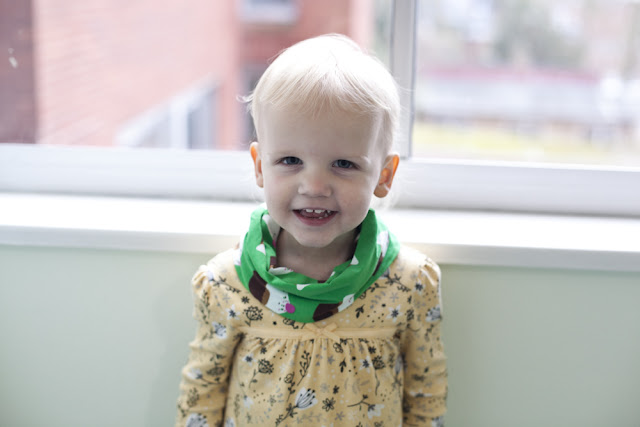 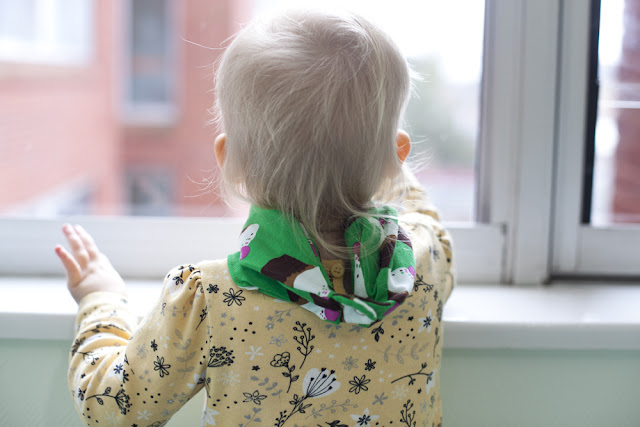 The third and final one was the reversible scood. This one you can either have as white or pink. We decided to have the pink side showing. Although the pink side is the one which is the softest. This one has a few poppers going up the back of it and is really thick, definitely the warmest of the lot.

Maybe i'm just not very good with this hole scood thing but I was again not 100% on how it was meant to sit on her. So I did try it a few ways.
The first way I tried it was pulled down, its quite stretchy and so did pull over her shoulders. I thought this way looked really good, problem was as soon as she moved it just came up above her shoulders.


The second way would be ruffled up above the shoulders but I did think she looked slightly like something from the tudor times. The way we ended up leaving it was pulling it down over her shoulders and letting it ride up naturally and this seemed to look ok.

The thing I loved the most about the third one was how covered up the neck was, leaving no gaps for cold air to get down to her chest. 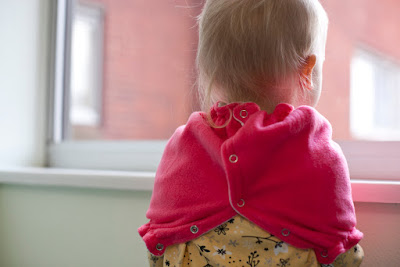 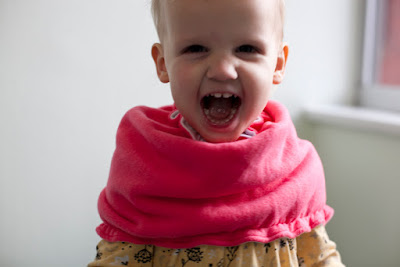 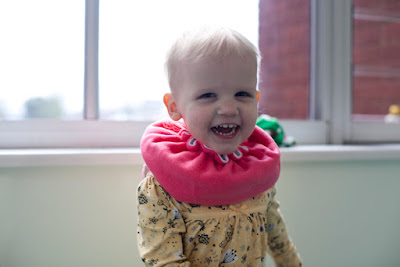 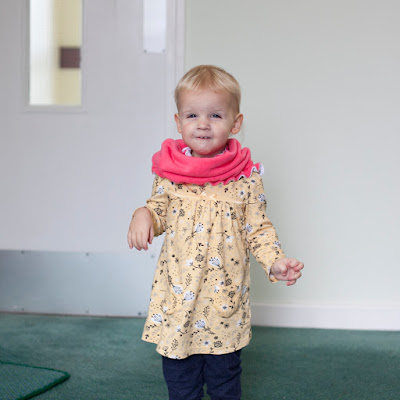 So far we have used the apples and pears scood the most and i've been really happy with it knowing its adding that extra bit of warmth to Lily.
All the scoods can be found on the Funky Giraffe website and are a great price of £6 each.

I now have a little competition for you to win a choice of 1 scood and 3 Funky giraffe bibs. Enter on the gleam app below for your chance to win.

Win a Funky Giraffe Scood and 3 Bibs
Posted by LilysLittleLearners at 20:53