During Lockdown and home schooling I learnt a lot about what my kids find tricky when it comes to education. With school sending through the work that the children had to complete, I came to realise how tricky some of the work is and started to learn what areas they needed help in.

2 subjects that stood out as a struggle was money calculations and fractions.

Luckily Learning Resources was here to help and they sent me a fun money game and a fun aid to help with fractions. 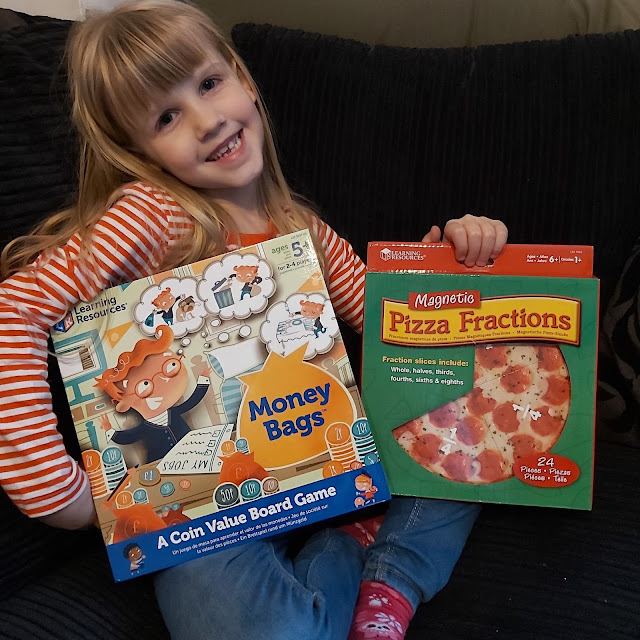 First up, the money game.

This game is called Money Bags and it all amount making certain amounts of money using coins.

The game comes with a game board, counters, coins of different amounts, dice and a spinner.

The game is really easy to set up and play and really simple for the kids to understand how to play. This is a good thing because with the maths being the thing they find complicated, it is needed for the game instructions to be simple.

The aim of the game is to be the player with the most money at the end of the game.

The board is really colourful and so makes it fun and encourages kids to want to play. 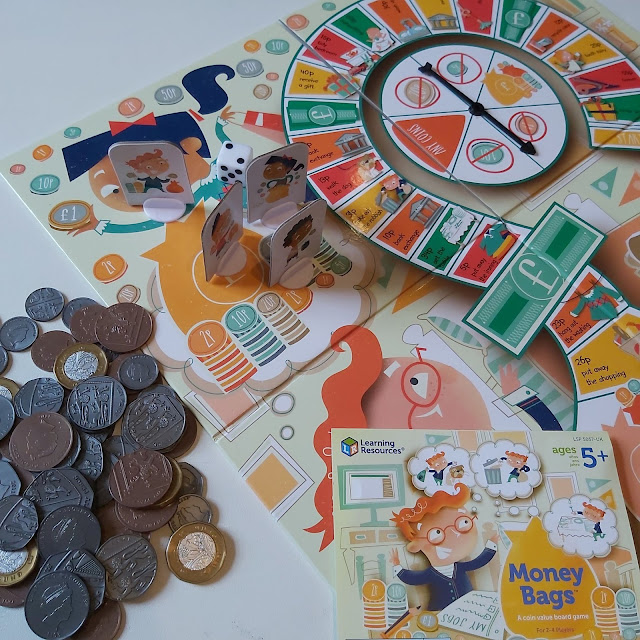 Each player must roll the dice to determine who goes first. The one with the highest roll will be the player that gets to go first. They must then roll the dice again and move that number of spaces. On the space they land, there is a amount of money. This is the amount that they will earn from landing on it. This is then when the spinner comes into play. The spinner has different amounts of money shown on the spaces with a cross through them. 10p, 5p, 20p and 1p. If one of these is landed on when the spinner is spun, they must make the amount shown on the space, but not use any of the coin that the spinner has landed on.

For example, player lands on 40p, but can't use 20p coins and so must only use the other coins to make this value. 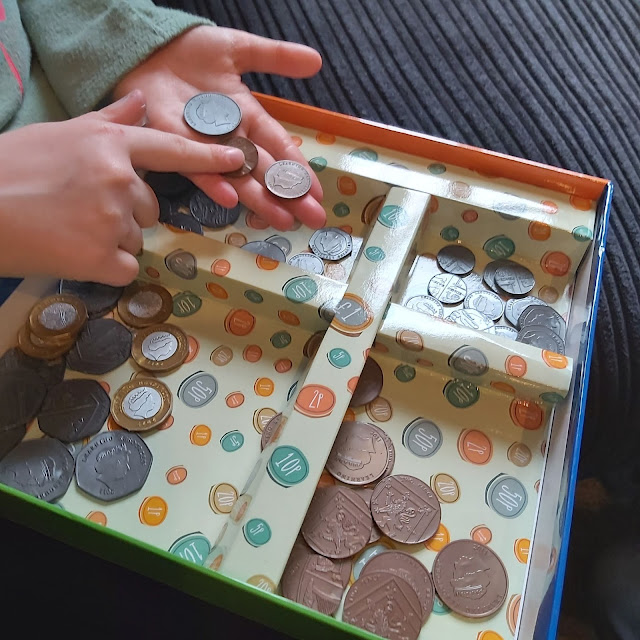 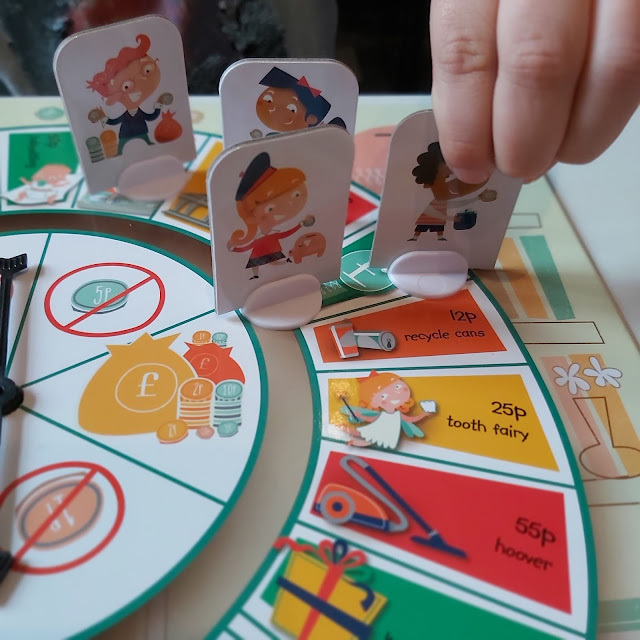 There are also 2 other symbols on the board, one says any coins, which means the player can use any coins in the bank to make their amount and the other shows the money bag symbol. If the money bag symbol on the spinner is landed on then the amount they need to make EG 40p, doesn't go to the player, it gets placed in the pot.

As the players move around the board, they may also land on a £ symbol, this is a great space to land on as it means that the player wins the money from the pot. After this money is won, the 88p needs to be replenished back into the pot. The money for this can be taken from the bank.

The game continues until a player gets to the finish line of the board. This is then game over. That player then gets to take what ever money is in the pot and add it to their money pile. This does not mean that they win the game but just that the game has ended. Each player then must count up their coins to see who has the most money and the one with the most is the winner. 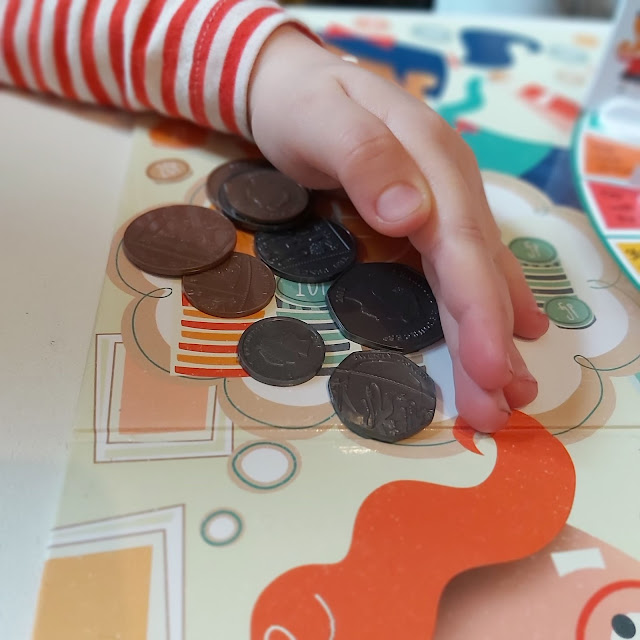 This game is really great to help children get used to using coins to make a value. This is something Lily really struggles with. The coins in the game are HM treasury approved meaning that they look like real coins which will help learn coin recognition. Coin recognition is something a child needs to learn before they can then make a value from coins.

The kids all really enjoyed playing the game and the best bit was that they didn't realise they were actually doing a maths lesson at the same time. They have asked to play the game a few times now since we have had it which is also a good sign that they enjoyed it.

The other item we was sent was to help with Fractions. This was a Magnetic Pizza Fraction set.

The kids are obsessed with Pizza and so I knew that these would be a great encouragement for them to want to learn about fractions more.

Each pizza looks really well printed and has different designs of different flavoured pizzas. There are so many activities that can be done with these. 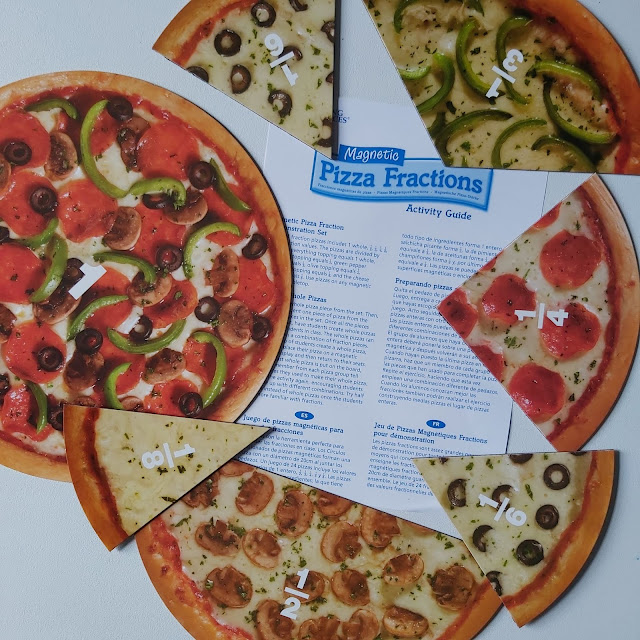 Firstly they are great examples of simply teaching different fractions. You can do this by getting your child to make a whole pizza by using the different fractions. So for example, make one whole by using two halves. The child may easily know what half a pizza looks like, they then would also learn that 1/2 is the numbers for one half.

You could also ask your child to give you 1/4 of a pizza. Your child can then start to learn the numbers for 1/4 and also what a quarter looks like.

You could also make sums for your child to answer, like in the picture example below. 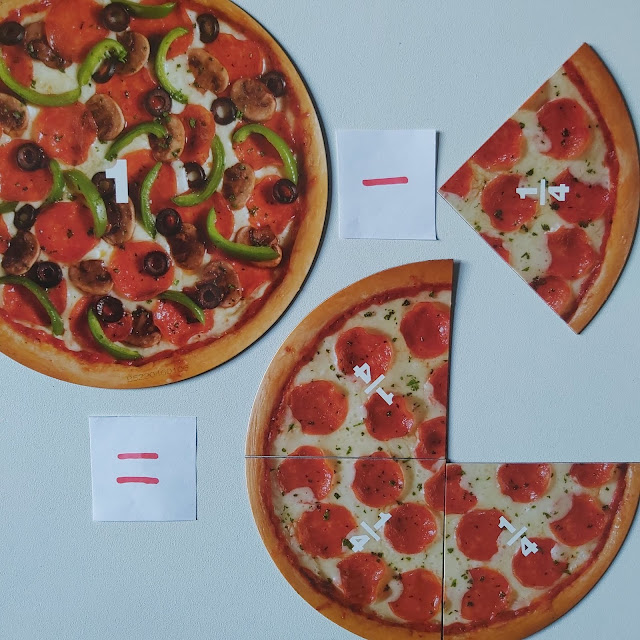 As these are pizza's its a great way for a child to share a whole pizza out, or you could play restaurants and order a certain amount of pizza. This adds a play element to the learning making it much more fun.

These are such good quality and you can tell that they will not get ruined and last a while. They are also magnetic so can be used on a fridge or magnetic white board.

You can head to the Learning Resource website to see these and many more amazing things to help learning become fun!

What subjects does your child struggle with?

Would these help your kids learn?

Posted by LilysLittleLearners at 12:08