We could all do with a bit of a laugh and if these games don't get you doing exactly that then I don't know what will.

I have 2 brilliant games from Tactic Games to tell you about.

We was sent Doodle Doo and Don't upset the Llama and we have had so much fun playing them. 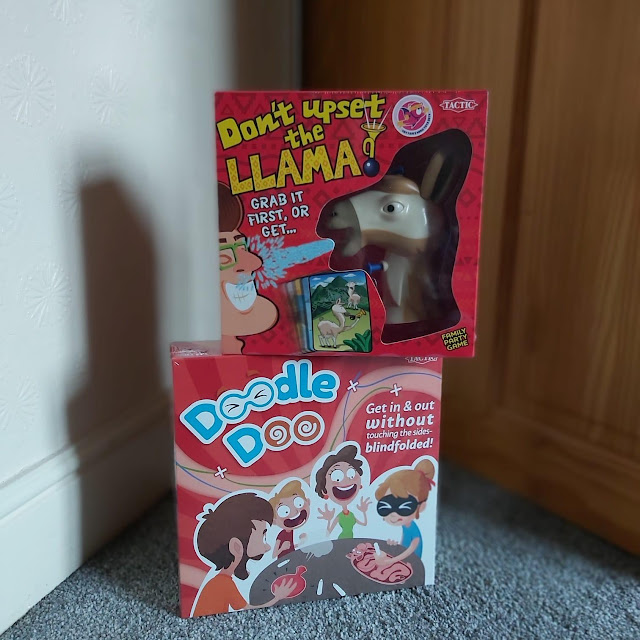 Let me tell you first about Doodle Doo.

Doodle Doo is a fun game where you have to draw around the maze of the animals belly without hitting the sides. Sounds easy? Not so much when you are blindfolded haha! 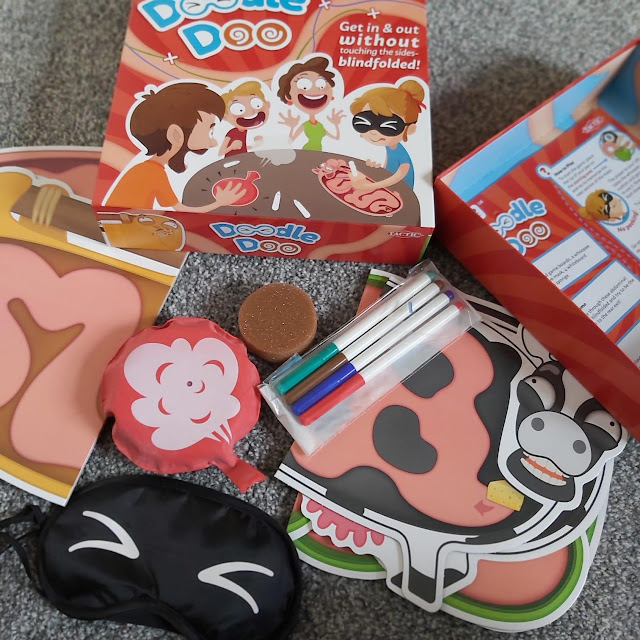 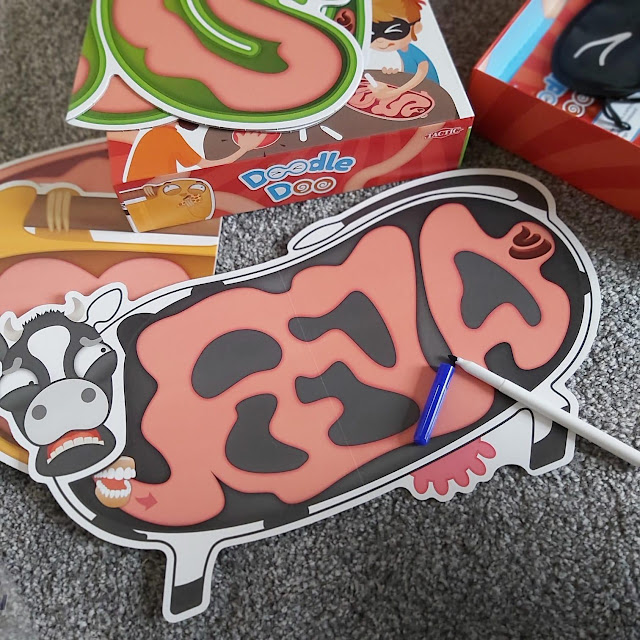 The little blindfold is cute and it fits all the kids heads perfectly, and also stretches onto adults heads. We did find that you had to make sure it was low enough on the child's face though so then they couldn't peep.

You then have to take it in turns to try and draw around the body maze until you reach the little poo symbol at the end. The kids thought it was hilarious that it has a poo symbol. 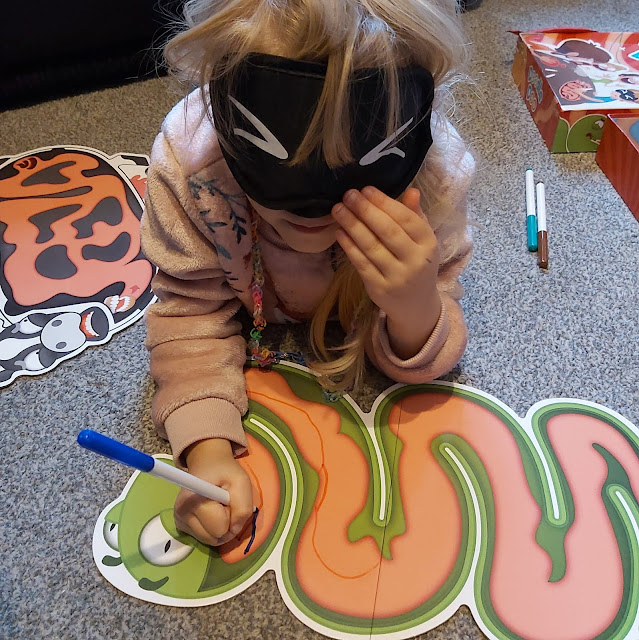 The game is a little like that one where you have to get the metal stick along the wire, and if you touch it, it makes a loud noise. For this game its up to the other players to make a fart noise with the whoopie cushion when a player draws into the side. Again the kids thought this was hilarious.

The winner is the first one who makes it all the way to the poo. The kids have played this game loads and it is one that they get out often and always enjoy. 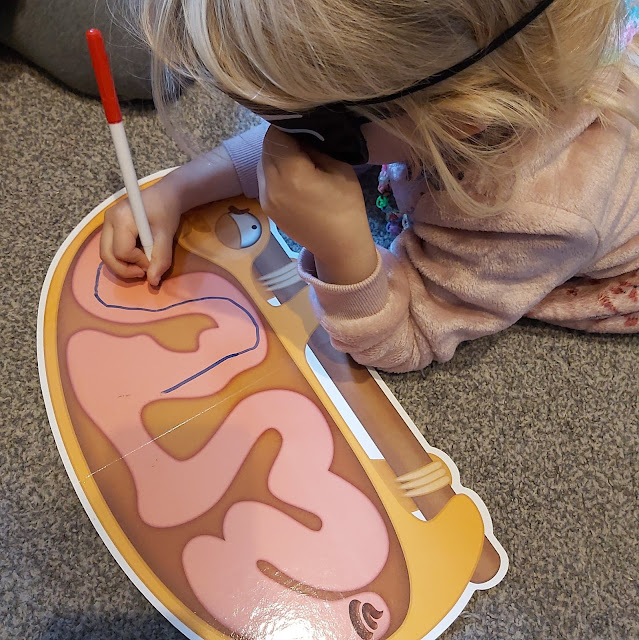 The next game is Don't upset the Llama which has to be the girls favourite out the 2. Why? Because it involves water and getting squirted.

The game comes with a dice, cards and a squirty llama head. Also a set of rules. 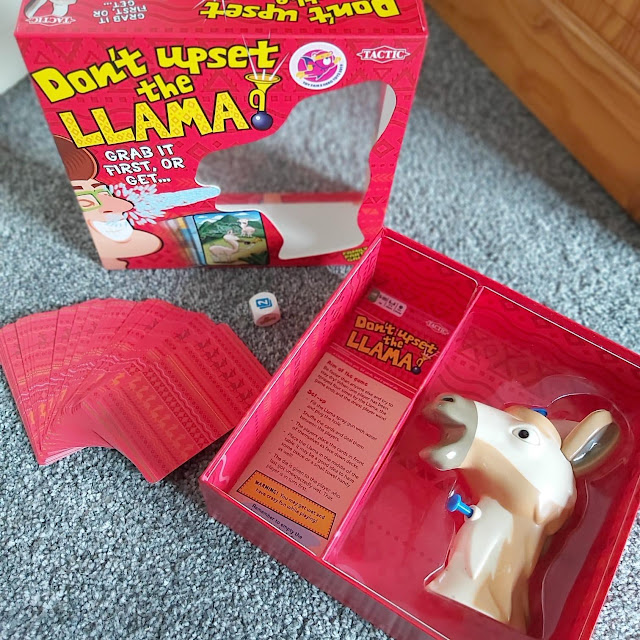 The Llama head gets filled up with water and then placed in the middle of the players. You then deal out the cards to all the players which they place down in front of them. The game rules say that the dice goes to the player who last got unexpectedly wet, but if we couldn't figure that out we just went youngest first.

The idea of the game, is to stay as dry as possible. The person who ends up getting sprayed by the Llama 4 times is out the game, leaving dryer players behind.

It did take us a little while to get our head around how to play, but it became very easy and fun when we worked out how. 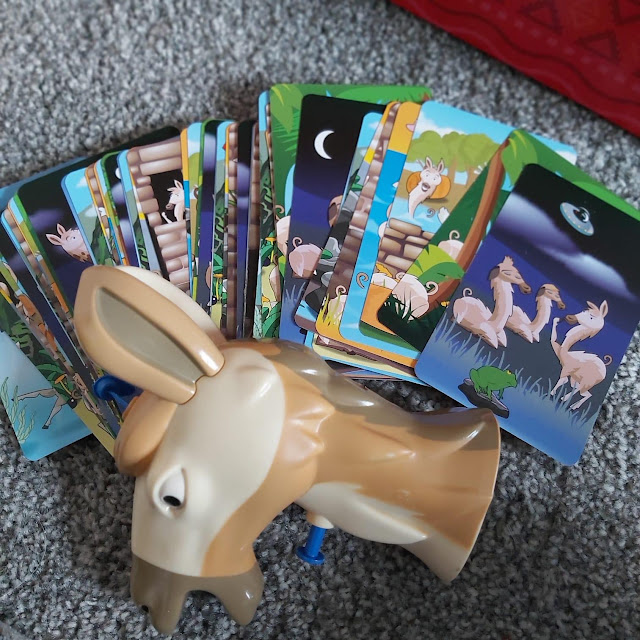 The dice has different instructions on it, Turn one card, Turn 2 cards, Turn 3 Cards and Grab the llama. The player needs to roll and follow what it says on the dice. If its the Llama then all players can try and grab the Llama squirter. If lots grab it at the same time then its the player with the most fingers on it that gets to have it. They then choose who to squirt.

If its turn 2 cards or 3 cards then they are looking for a horn or a spray in the picture of either the second or third card depending what was rolled and turned. This means they spot it and then can grab the squirter and squirt any player.

It is only when it is turn one card, that who ever spots the spray or horn gets to squirt the player who rolled the dice. 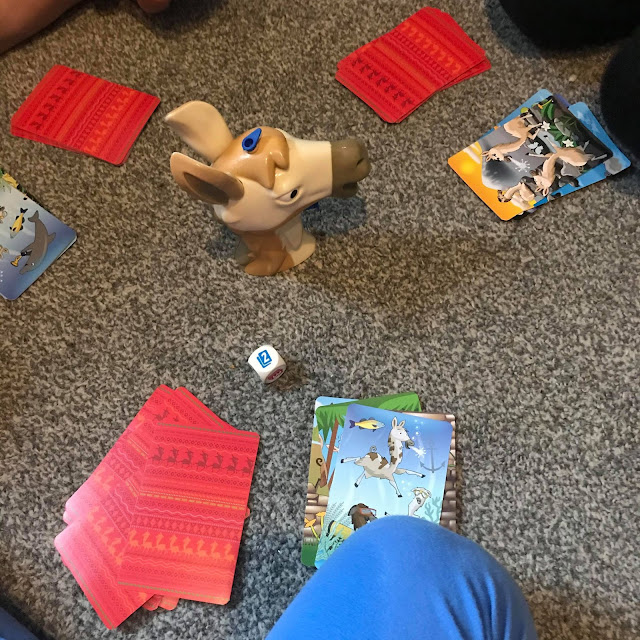 There is a catch though, if the cards are turned and there isn't a horn or spray on the picture, and someone still grabs the llama then they then get sprayed for causing the mistake. This means that the players aren't just grabbing it every time.

The game caused so many laughs as they love playing with water and they also love getting to shoot us adults with it too! 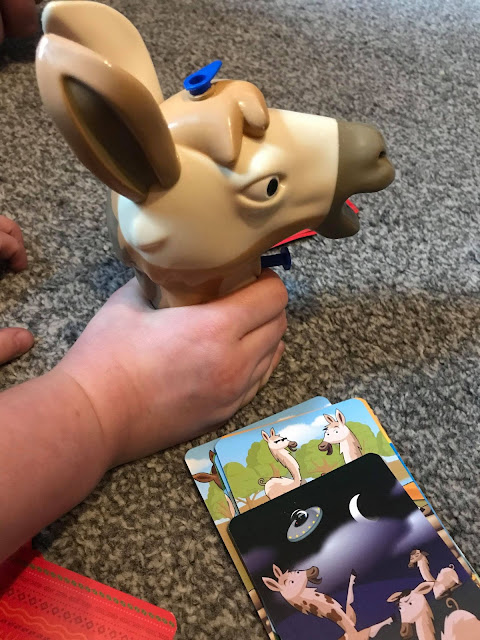 These games are so good for kids who love fast paced fun games, they will also make the perfect fun games to play for Christmas (yes I said that word)

You can buy the games from the following links -

Which of these 2 games do you think your little one would enjoy?

Posted by LilysLittleLearners at 12:54