It has been 11 days already since we have been back from our holidays! And Wow do I wish I was back there. Each year we head to Weymouth for a Holiday and this year I was lucky enough to get 2 weeks there!

I was lucky enough to win a weeks stay in a holiday house for the first week and as we already had the second week booked in a flat on the harbour it meant we could have 2 weeks in weymouth.

We really did have a great 2 weeks, with only 2 cloudy days and no rain the weather was perfect. Unfortunately for the first week Lily was ill, which lead to her being tired mostly and not wanting to do things but we made the most of it and still found things to do.

There really is to much to write about for a 2 week holiday, so I am just going to write about some of our highlights and things we did over the 2 weeks. 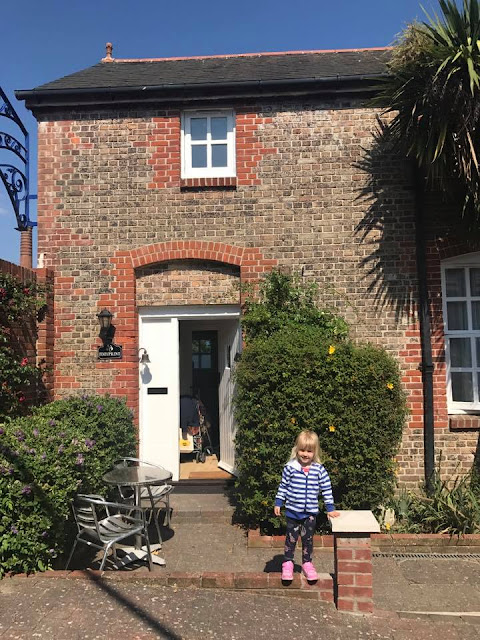 Our Holiday House - This was the lovely house we got to stay in for the first week. It was situated in a little private courtyard and so was really nice and quiet. But the house was lovely, really big and so cosy and had 3 bathsrooms! It was somewhere I could of easily lived in as it felt like home to us the entire stay. We were really sad to have to leave. It would definetly be somewhere I would think about staying again. 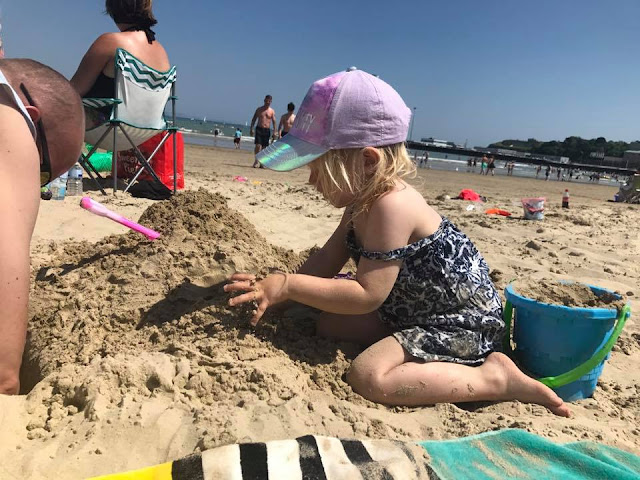 On our first day we went to the beach. I was hoping to spend many days at the beach for Lily but as she was poorly and the heat was so hot, we didn't manage many. But the days we did Lily enjoyed building sandcastles and digging holes and making mud pies with sand and water. In this picture Lily wasn't ill, we thought it may have been sun stroke which made her ill but as it lasted a full week of being ill we now know it wasn't. I did cover her in sun cream all day, made sure she drank and she had a hat on all day so we was surprised when we thought she had caught sunstroke. 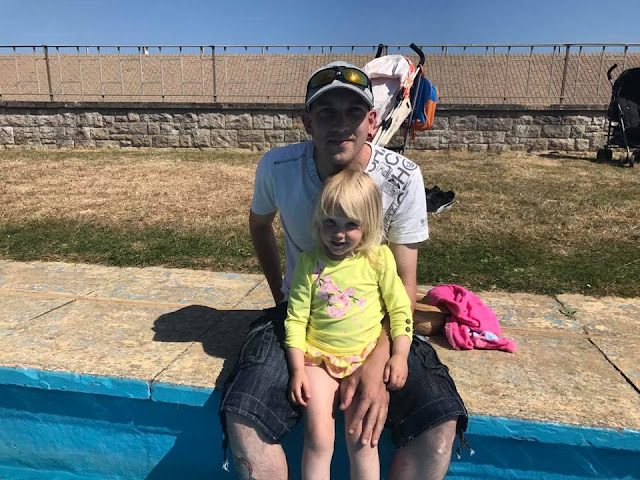 The next day was just as hot as the one before. So even though lily was a little ill, we decided that she needed to cool down and so we went to the paddling pool. Lily really wasn't in much of a mood for playing in it unfortunately and took a lot of convincing to even get in and paddle. Though I must admit I enjoyed cooling down in the pool that day. 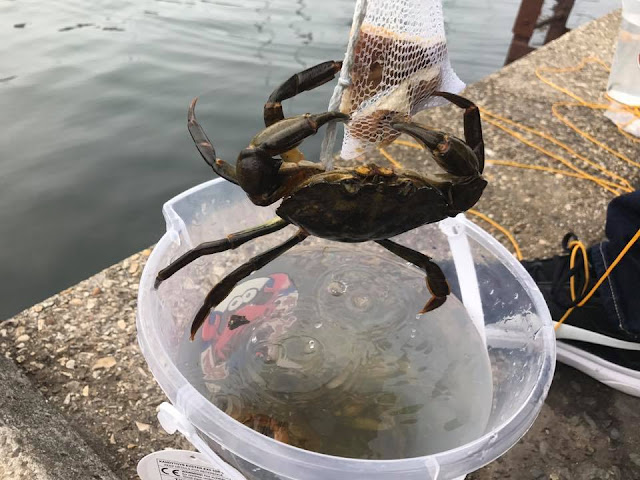 Another highlight of our holiday was the many afternoons we spent crabbing. Lily was still a little ill, though mostly just tired and did a lot of sleeping in the afternoons in the pram. Which meant me and my partner could relax by the harbour and catch some crabs. We caught loads and even caught some fish. This was the biggest crab we caught and he didn't want to let go of the bait. We of corse returned all of the crabs back to the harbour. 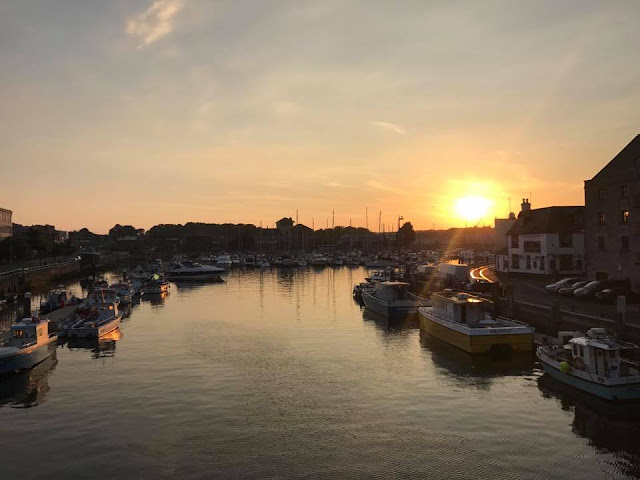 Another thing I enjoyed while on holiday was getting to do some photography, we had some lovely sunsets and some really nice skies and so I made the most of this and took some great photographs. I hope to write some photography posts about this soon. 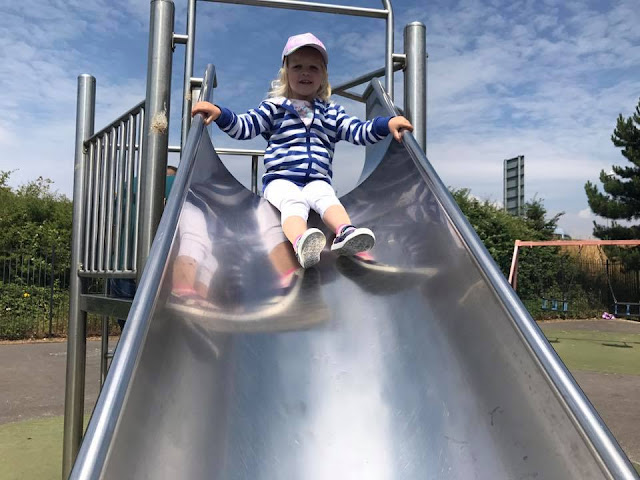 By Thursday Lily was feeling a lot better, we went to the market which Lily enjoyed waking around and she finally started to eat again and had a hotdog. We then went to the park, which is one of Lily's favourite things to do. Lily was still tired by the afternoon though and again spent a lot of it sleeping. 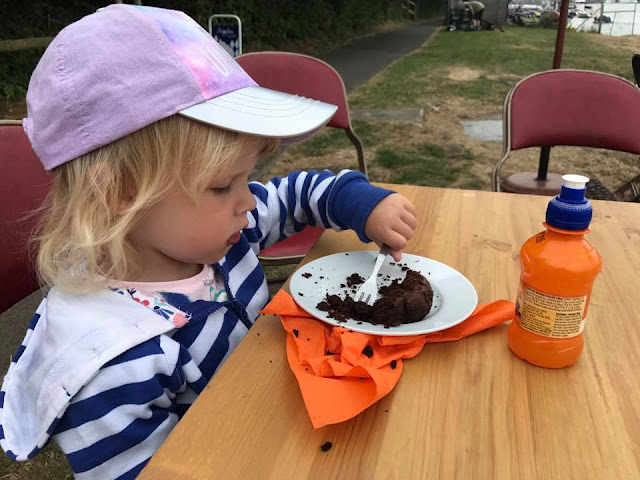 Between Lily sleeping off her illness though we tried to have as much fun as possible, lots of ice cream and cake to keep Lily happy and lots of relaxing for mummy and daddy. The great thing about Weymouth is you really don't have to go to far to have a nice time. There is plenty to do and plenty of nice things to see right by the harbour and seafront. 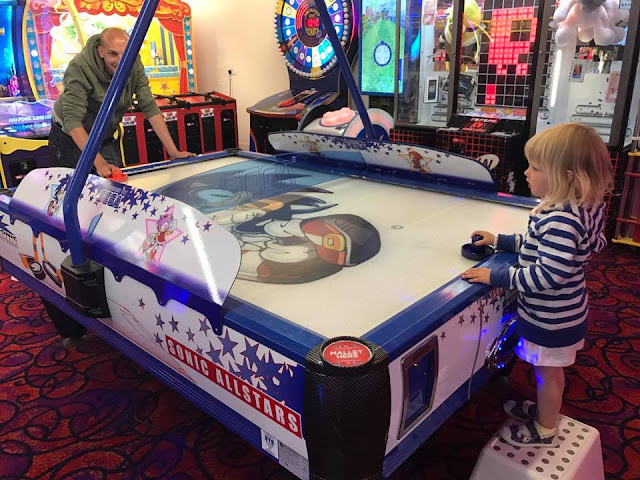 One of the things we love to do as a family is go to the arcade. Most nights Lily was to tired and she was asleep by 6.30pm and so we didn't get to go, but towards the end of the holiday we managed to go and she really enjoyed it. Her favourite thing to do is the 2p machines, but she also showed some interest in other arcade games this year like the Ice Hockey game above. She of corse won and obviously didn't cheat at all by stopping it going in the hole with her hands. haha. 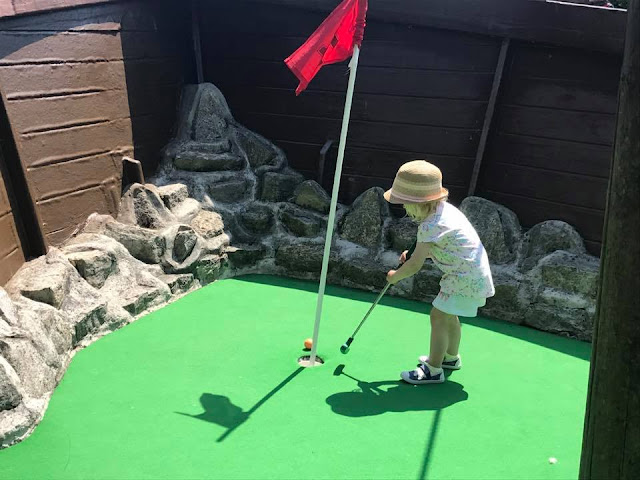 By the last day of the first week of our holiday, Lily was much more herself, though a little moody. We decided that we would go and play crazy golf. At first Lily didn't want to join in but as soon as she saw how much fun we was having she wanted to join in and loved it. I think this was one of my favourite things we did during this week and we all had loads of fun together. Later that day I decided to take a boat trip. Lily didn't want to go on a boat so I went alone. It was probably the most relaxing part of the holiday so far.

Unfortunately my partner could only stay one week, as he had to get back home to work, so he left us the next day and my parents joined us for week 2. We moved out our holiday house and into the flat on the harbour that we had rented for the week.

It was nice that Lily had perked up this week, but she was still moody and tired. I think the illness and the heat had really taken it out of her and being away from home when your ill and tired is never what you really want. 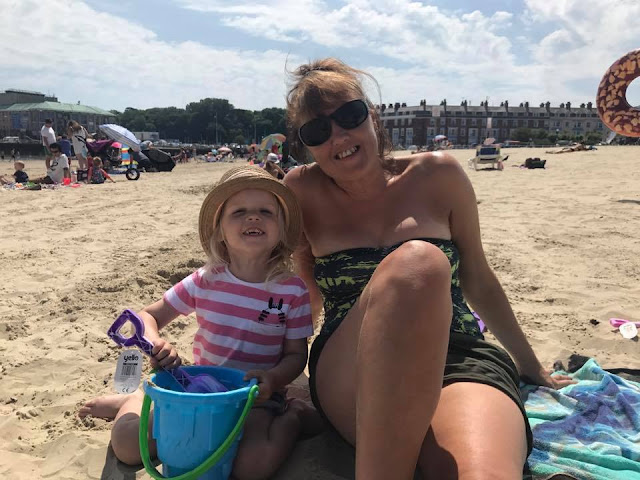 We had a few more mornings on the beach this week as Lily was feeling better. She loves playing on the beach with her nan, her nan is a big beach fan so they love digging together and going hunting for shells and dipping their feet in the sea. 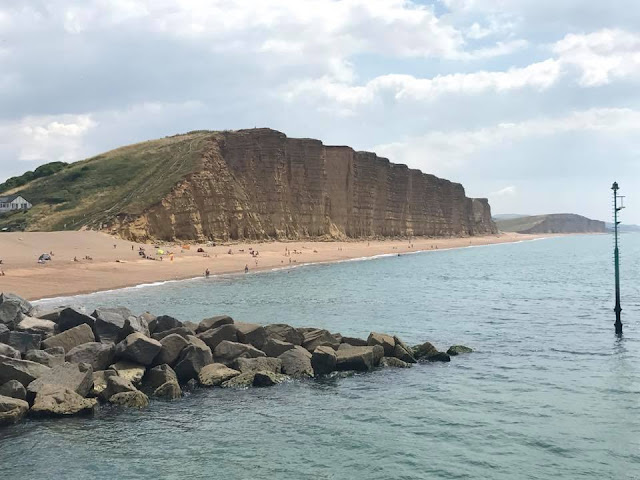 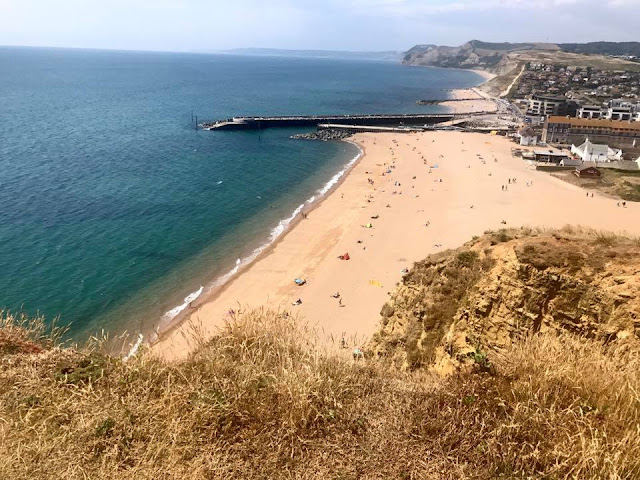 One of the highlights of the week for me was when we took a drive out of weymouth to visit West Bay. This place is so scenic and it is somewhere I have only ben as a child and so couldn't remember it. I love visiting new places and so it was a great day out. The cliff you can see in the first picture I just had to climb up with my dad. My mum and Lily stayed on the beach below and we walked it all the way to the top. There was some great views from up there.
After this we went onto the next bay a little down the road. Here was a lovely little beach restaurant where we had a cup of tea and then Lily played with her new truck in the sand. It was a lovely day out. 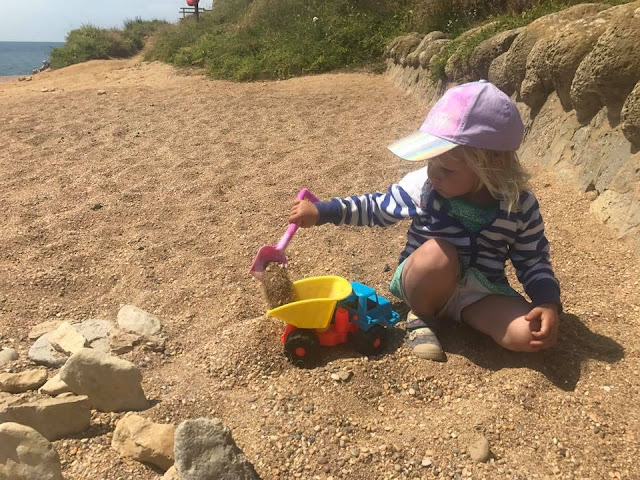 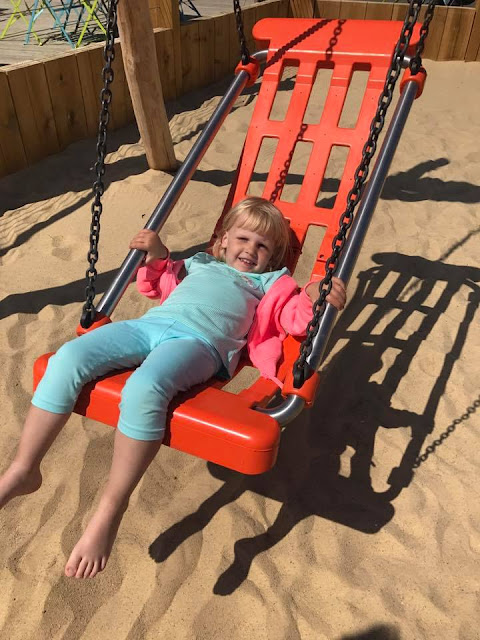 The next day we decided to take a long walk along the seafront. It takes over an hour to walk, but is a really nice walk to do. At the end of it was a beach bar with a sand park. This kept us all happy with me and my parents having a cool drink, and Lily getting to play on the park. The park had all sorts including this really cool swing you layed back in. We would definetly visit this park again. 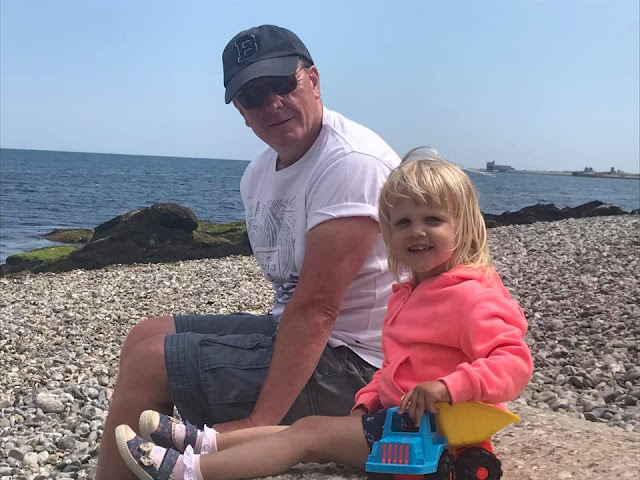 This week was mostly spent relaxing and so you would find us chilling in quiet places like this little cove. Which was perfect for us to relax and perfect for Lily to spend throwing rocks into the water with her Grandad. I also spent some time taking my net to the rock pools and catching baby crabs for Lily to look at which she enjoyed seeing. 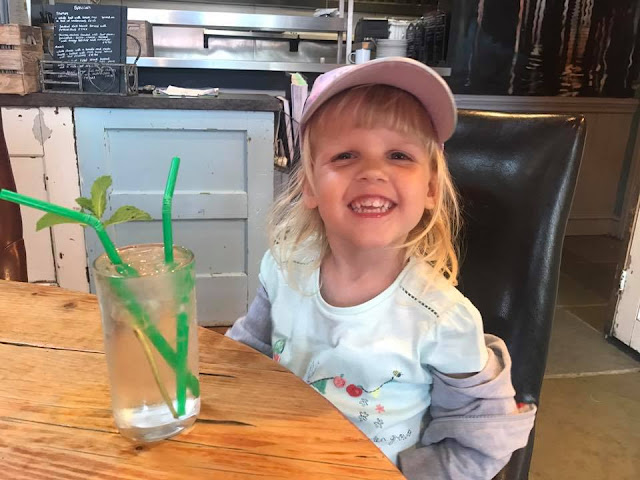 We had a great second week and over all the 2 weeks holiday went so far and now seem like it happened ages ago. This photo above is my favourite from the holiday, seeing Lily so happy with her water and mint. Which was a pretend Mojito as she saw me drinking one and wanted the same as me. Which obviously she couldn't have.

We really did fit in lots over the 2 weeks but there is always so much more we could do too. I can't wait to go back next year.

Have you had a summer holiday yet? Where did you go?

Posted by LilysLittleLearners at 11:49