Here is a post which is going to be all about those little leaks that us ladies may experience. It will contain some giggles but also contain a little bit of TMI (to much information) so if you don't want to read all about my little leaks, click off now!

Little leaks are something you do not to be embarrassed about although it's something that we also don't often talk about. But i'm going to put my hand up and say "I've done it!" I have accidently let go of a little wee and ended up sat there with wet knickers!

I have never had a strong bladder and for me it has almost been impossible for me to not nearly pee myself when needing the toilet and someone makes me laugh. But I have noticed that it has got a lot worse through pregnancy and then after having Lily. Which by the way is totally normal. During pregnancy you have a baby bouncing on your bladder and then after pregnancy you also have a weakened pelvic floor muscle. Suddenly holding onto that wee is suddenly a lot tricker.

So here are some giggle moments where I have found keeping hold of my wee impossible.

Number 1... Sneezing! Im out and about and been holding onto my wee heading to the nearest toilet and ACHOO!!...and sigh.. there is suddenly less wee to hold on to.

Number 2...Hilarious Games. Little did I realise that at Christmas time when we were playing ridiculously stupid games and I was balling in hysterics that I was also letting out a little pee. Lets just say I needed to change my knickers after those games.

Number 3...Trampolining. Don't get me started on this sport. I had no clue that jumping up and down on a trampoline would mean you would leak. I didn't even feel like I needed the toilet at the time but as I jumped into the air and came back down, so did a little wee. I didn't even have any spare knickers on me at the time. I just thought it was me until I was talking to a friend and telling her about going to trampolining and the first thing she said was (excuse the language) "Did you P*ss your pants" Which I replied "YES" and we had a real good giggle about it. It seems that it's not just me and it is in fact something that is tricky for all women after having children.

So, I thought the solution to my problems would have to be to wear disposable pads. Not ideal but it meant that when trampolining at least I wouldn't end up with wet knickers. But it seems that maybe I don't have to... 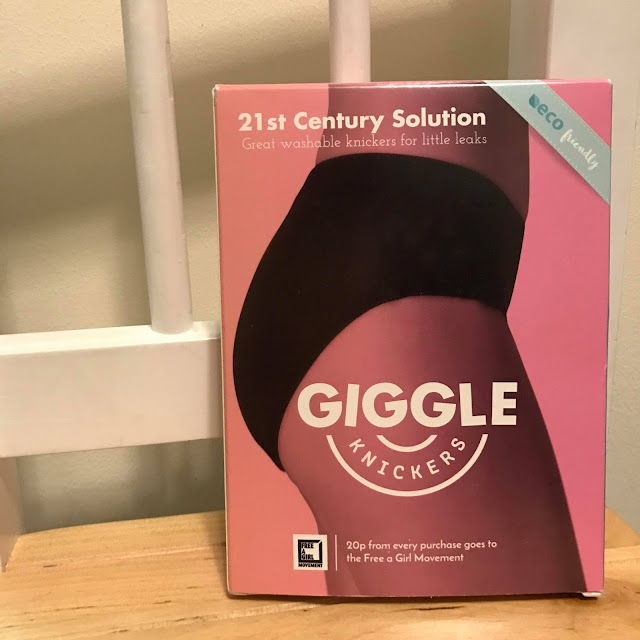 Giggle knickers are washable knickers designed especially for those little leaks. They are super soft, light weight and fashionable but also come with a protective panel which means that you don't have to put up with the bulk or bother of wearing disposable pads.

I was sent a pair to try out and report back to you about what I think. So I decided to try them out the next time I went trampolining.

The first thing I thought about them was that they looked a lot more stylish than what you would imagine knickers for little leaks to look like. They were a nice shape and not overly big. I didn't feel like I was wearing something out of bridget jones diary and so that was a big plus.

Secondly the material is quite soft and also stretchy. I had small ones and on me they did feel a little tight, but I blame my big bum for that one. I probably could of done with the next size up. But then again, the tightness also felt like they were secure and so no little leaks would be escaping.

The protective panel in the knickers is very discreet and to look at the knickers, especially from the outside, you would not know it was there. 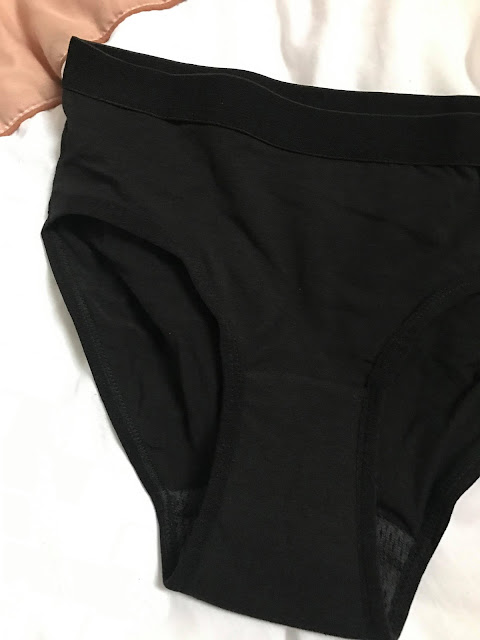 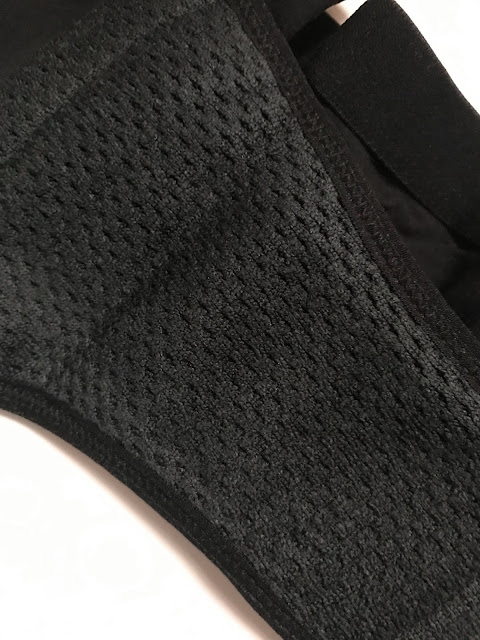 I wore them all day for trampolining and found them very comfortable to move around in but unfortunately while I was there, I didn't experience any leaks. I was bouncing with Lily and so I don't think that I bounced high enough.

The second time I tried them out was when picking up Lily from Nursery. I generally always have a cup of tea when I leave, and even if I go to the toilet before I set off, by the time we have walked back and I get to my front door I am bursting to go again. I nearly always end up having a little leak. You would think maybe I would concider not having that cup of tea, but as you mums know, it may be your last chance for a warm one as when the kids are home, there's no chance. So it was the perfect time to try them out.

As usual I got to my front door and in the struggle to get the key in the door, I end up having a little leak. But with the protection of the knickers I wouldn't of known I had. The protective panel did its job and also stopped my leggings from getting a little damp. I have a feeling these are going to be my new tuesday knickers for the day Lily goes to nursery.

You can buy Giggle Knickers from the website at £12.99 a pair. Which as you are not wearing them every day I don't think is too bad of a price. Although it could amount up expencive if you did want to wear them everyday and would need to buy quite a few pairs. But you would be saving money from not having to buy panty liners and so it would be an investment. Also don't forget you are saving the environment by reducing waste from using disposable.

Sizes range from XS to XL and I would say I am a size 10 in knicker size but the S size was a little tight and so I think a M which is a size 12 would have been better for me.

So, what do you think to Giggle Knickers? Would you wear them?

Have you ever had a funny little leak moment that has lead to giggles?
Posted by LilysLittleLearners at 14:24