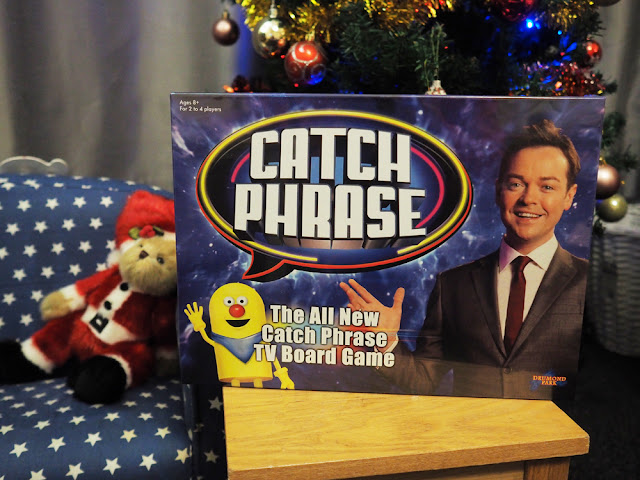 For me, Christmas time is the perfect time to play board games. As a family we don't often go out on Christmas night. After stuffing our faces full of Christmas food its usually a short nap (for some) and then we all get out some yummy Christmas snacks, some festive drinks, and a brilliant board game to all enjoy some family time together.

We were sent a CATCH PHRASE game to review from Drumond park and It is going to be the perfect game for us all to play on Christmas night.

A little about the Game
ITV’s hugely popular CATCH PHRASE game show is back on UK TV screens. Now up to six players can take it in turns to step into Stephen Mulhern’s shoes and play host in the latest version
of the All-New CATCH PHRASE TV Board Game.

The ultimate aim is to accrue the most ‘money’ by guessing Catch Phrase puzzles over each of the
rounds… with increasing amounts of ‘prize money’ on offer.

I was so excited to get to play this game. I have often watched the show and loved trying to guess the catch phrases, although I wasn't always very good at it. I am also a huge lover for board games so could not wait to try out this game.

When I opened the box it was full up of lots of items. The contents are - 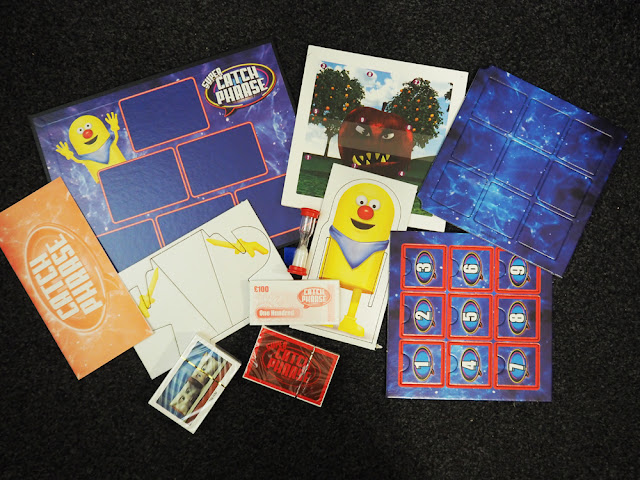 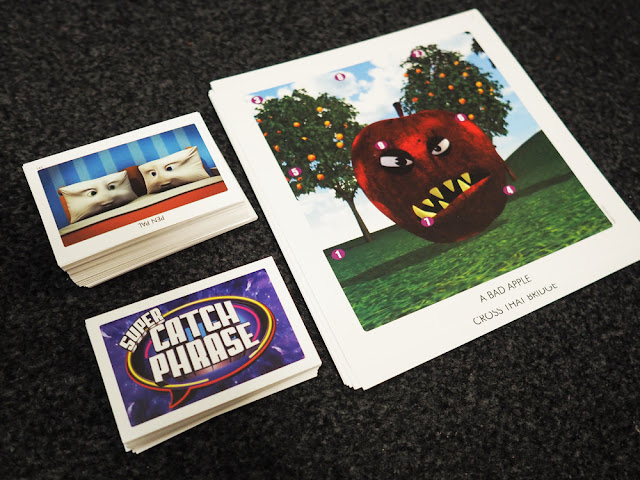 The game was really easy to set up and the only things that needed to be done was pop out the holes of the bonus frame and pop out the frame covers. You also needed to pop out Mr Chips and bend the arms of him so then he would hold the cards. 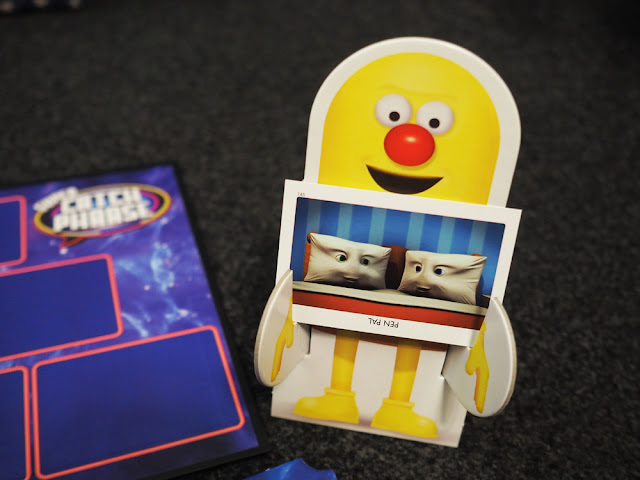 The host places the cards onto Mr Chips, turning the timer round giving the contestant 20 seconds to guess. The card will show an image which is a 'Say What you see' image and you have to guess what you think the phrase is. The answer is on the back so the host can see but the contestant can't.

I loved playing contestant and did quite well to get some of them right. Each time I get one right, I got £100 of pretend money and got to remove a square onto the bonus board. I then had to try and guess what the bonus picture was. I didn't do too well at this part though and didn't win any money. 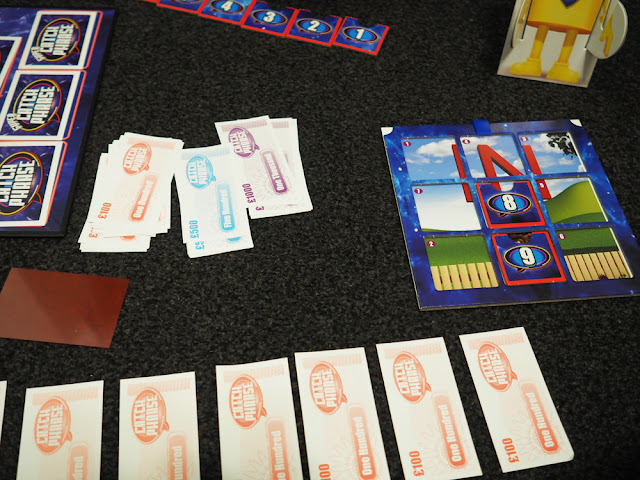 You then move onto Round 2 which is the Super Catch Phrase round and the host puts the catch phrase cards picture side down on the board. The host goes through all of these and each card is worth a different amount if you get it right. I love how the host can reveal the answer. You can't see any writing on the card until the host places the red filter over the card and it magically reveals the answer. 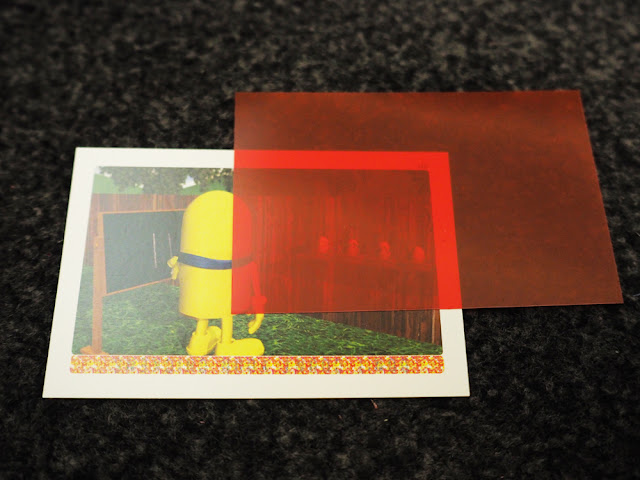 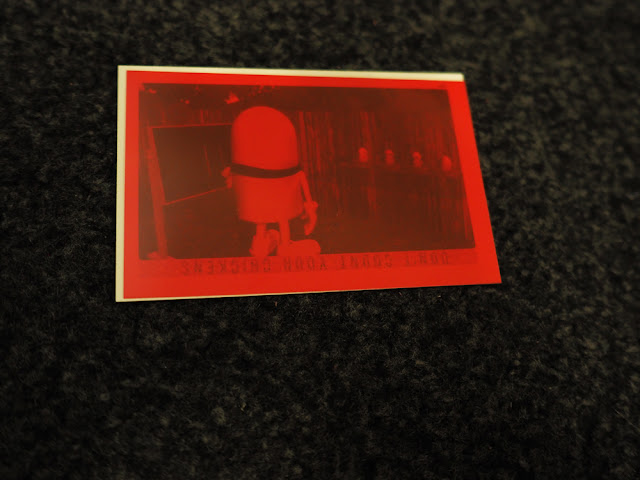 After both players have played, you count up your money and the one with the most is the winner.

When playing with more players it is much more like the real show you watch on Tv. You play just like the 2 player version and each player gets a chance to guess whats on the card to win money. They also get to have a guess of the bonus round when they guess one correctly.

There is also a quick fire round where the host shows them the card and the person to give the answer first in the 20 seconds wins the money.

When it comes to the Super Catch Phrase round, when playing with more players it works just like the quick fire round where who ever gives the answer first gets the money. Again the one with the most money wins! 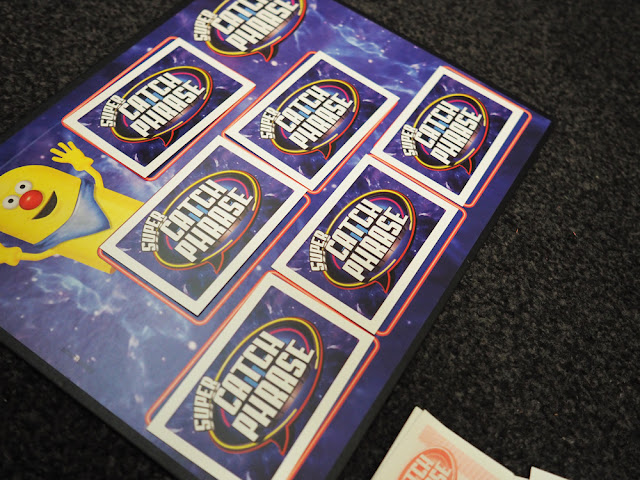 I think the game does take a little getting used to but when you do get used to it, it is great fun. It is definetly more fun when playing with with more players and so I look forward to Christmas night when there will be a big group of us playing. It is perfect for around 4 players.

If you are a fan of the show then you will LOVE this game as it really is just like being on the show. Apart from unfortunately, you aren't winning real money.

The game is recommended for children aged 8+ and retails at £22.99. If you fancy playing this game at christmas then you can buy it here.

The game isn't just great for christmas though and is perfect for all year round and so I have got one game to giveaway to my readers.
For your chance to win, enter on the Gleam App below.

Win The Game Catch Phrase by Drumond Park
Posted by LilysLittleLearners at 19:30