We are a big fan of games and a big fan of Orchard Toys. So when we got offered this Games Compendium which contains 4 games in one box, we could hardly say no to reviewing it.

The box was a little bit bigger than normal Orchard Toys games, but still had its trusted handle on the top making it so your child can take it anywhere with them. As always the front of the box was colourful, and inviting. We couldn't wait to get it open and play some games.
The fact it has 4 games in one box is great. Perfect to take to a grandparents house or to get out on a day of bad weather. 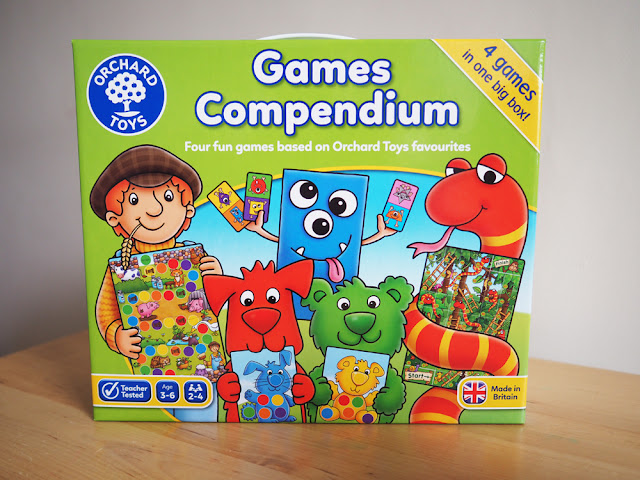 The 4 games that are included are -

There is also a instruction leaflet in the box.

The first game we decided to play was the red dog colour game. This one looked the most simple game for Lily to play.

The game comes with 4 playing boards with colourful animals on them. On the animals there are little coloured circles. You also get 24 coloured disks and 1 spot coloured dice. 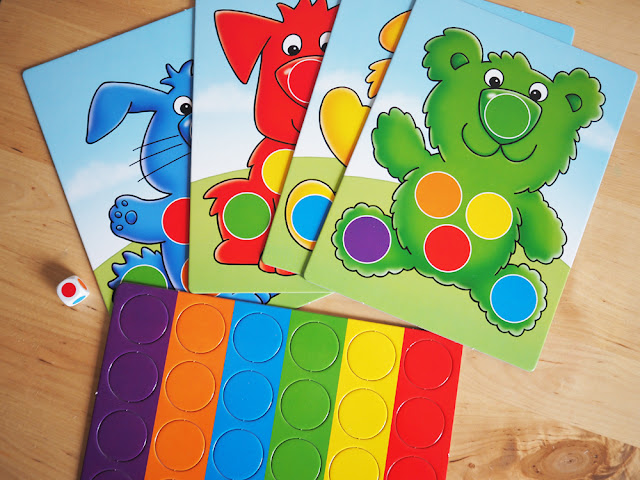 To play the game you spread out all the disks, roll the dice and take it in turns to place a disk on your board. If you roll a colour you already have, you miss a turn. The first person to get all the colours on their board wins.
This game is perfect for Lily's age and she understood how to play. She really enjoyed this and is already great with her colours and so did really well.
I would say that this game could even be played with a child younger than 3 years old. This would of been perfect to help Lily learn colours when she was doing that at 2 years old. 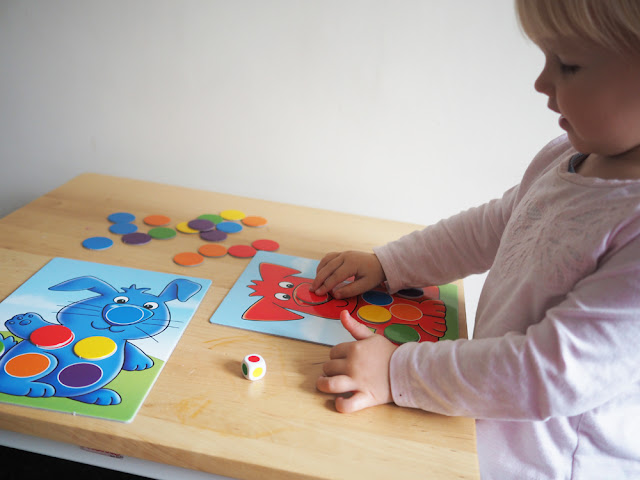 The next game we played was Old Macdonald. For this game you need the 1 playing board that comes in 2 pieces which you fit together. The 24 coloured disks (the same disks you used for the first game) 4 playing pieces and the coloured spot dice. 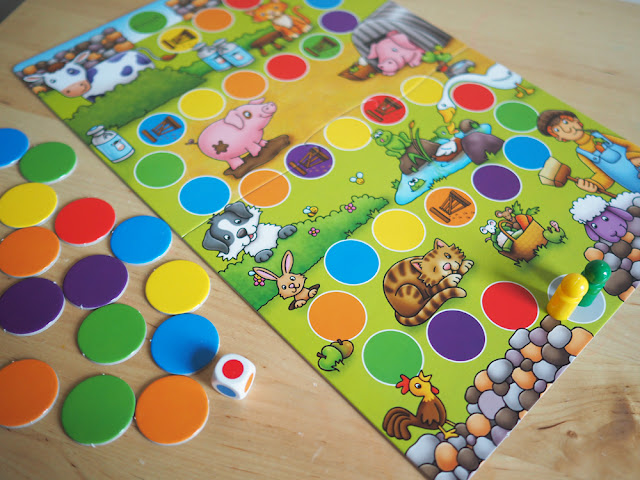 To play, you place out the coloured disks onto the table and place the playing pieces on the starting place. You then take it in turns to roll the dice. You then move to the coloured circle that is the same as on the dice. If you land on red, you then pick up a red disk and place it in front of you colour side up. If you land on a spot with a picture of a gate on it then you need to return one of your disks back to the other disks on the table.
On the other side of the disks are animals. At the end of the game when the first player reaches the end of the board, you can then turn over your cards and count up how many animals you have. The winner is the one with the most animals.

Lily enjoyed this game and we managed to play to the end. It wasn't to difficult for Lily to understand and with my guidance she did really well with it. 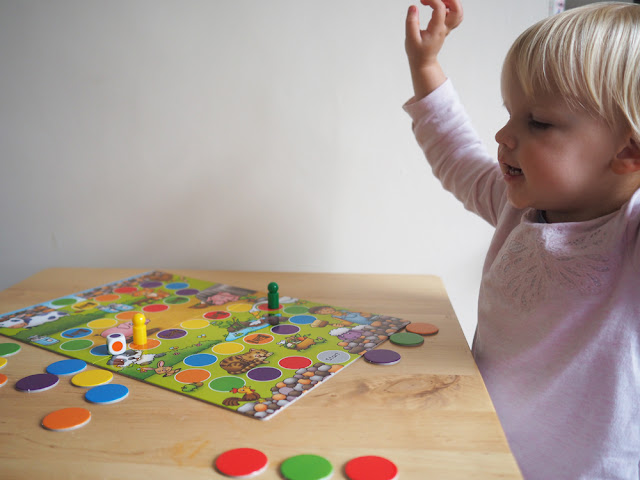 The next game we played was Monster Dominoes. Lily already knows how to play this game as we have an Orchard Toy Travel Dominoes set already. The game is really easy to play. Place the coloured dominoes into a pile facing down and the deal 7 to each player. You then take it in turns to place them down one after the other, matching the monsters as you go. Lily was more interested in the other games, but I think that is because we have played dominoes many times before. The game is super colourful though and the monsters are so child friendly. 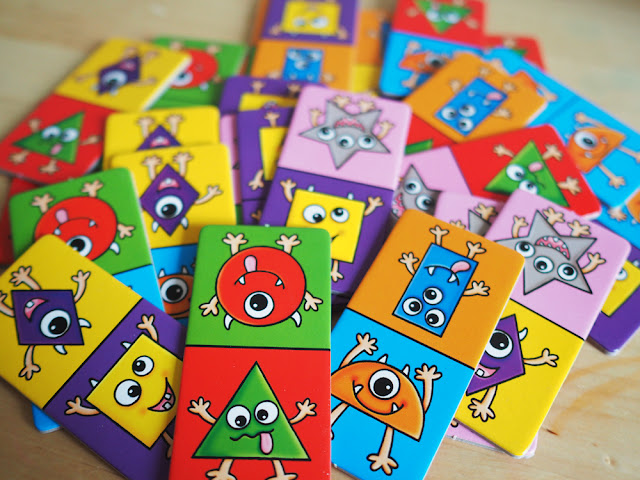 The last game to play was Jungle Snakes and Ladders. To play this, you set up the 2 piece board, and then you need the playing pieces and the number dice. The playing pieces get placed onto the start square and then you roll the dice to see how many places you move. This game is like any other game of snakes and ladders. If you land on the head of a snake, you slide down, and if you land on the ladder then you go up. The one to reach the end, wins. The board design is really cute, and super child friendly with all the smiling animals. 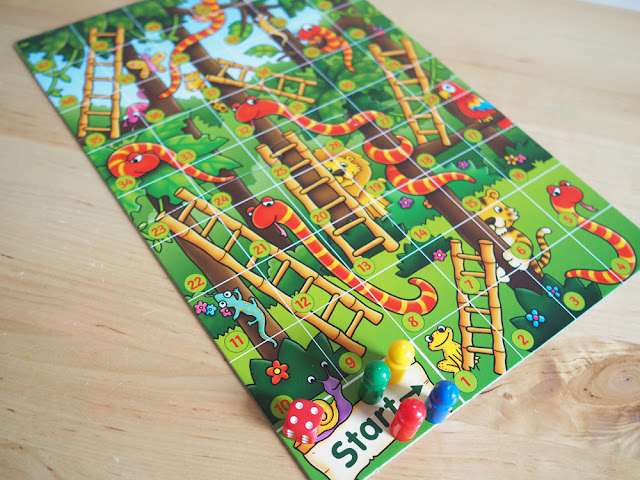 Lily did play this game with me, but mostly got carried away with climbing the ladders and sliding the snakes. She didn't understand that if she rolled 4 then she could only move 4 spaces. In the end she sat there for ages just moving her play piece up and down the snakes and ladders.
So I think this game maybe for when she is a little older than 3 years old. I think when she is older she will really enjoy playing this classic game. 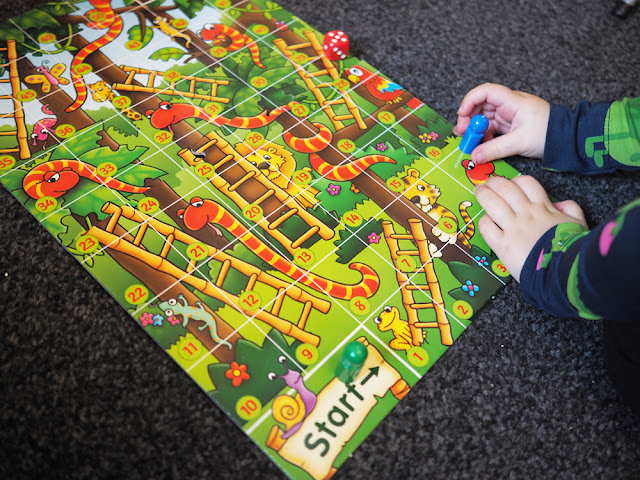 Overall these games are such good quality and they are made from a really nice hard board. You can tell that these games are made to last.
I think Lily enjoyed the Red Dog Colour game the most and that will be one the one from the box that we will get out often.

The Compendium Box is RRP £15.95 and is aimed at children ages 4-6. It can be bought from the Orchard Toys website.

Which of the 4 games you would like to play?

Posted by LilysLittleLearners at 12:21