Mid Month more About Me - My Tattoo

This month I decided to treat myself to a new tattoo. I have always had 5 tattoo's on my body, but only small ones.

I started with a heart on my hip when I was 17 (with permission from my parents) then after that I got a rose near my bikini line. Then a star on my ankle, a rose on my foot and then my last was a band name on the top of my back. I was 19 when I got that last tattoo.

At the time I was really into a band called Army of Freshmen. They are a Punky type band. The band loved it and I was the first Uk fan to get a tattoo done. I must admit this tattoo got a lot of attention from people working with the band. In fact I even had Jared from bowling for soup take pictures and a video of the tattoo when I was backstage one time hanging out with the boys from Army of Freshmen.

I have always said that I would not get rid of the tattoo and that for me it holds great memories. While this is true, the tattoo also got me unwanted attention. People coming up close trying to read it. Asking me a million questions and some even making fun of it. I once got asked "Why do you have a barcode tattoo'd to your back".

Im now 30 and so I had the tattoo 11 years. But it was time to get rid of it and get it covered up. It really didn't look good anymore as the black outline of the letters had got so thick that they had all blended in. It was really hard to read now and so I wanted it replacing.

I decided that I wanted some sort of camera design onto my back. But was told that I would need something dark, probably red and black to cover up the words. So we added roses to the design.

I was told it would cost £160, and take 3 hours. This would be the longest I had sat for a tattoo but I have a high pain threshold so it was fine to me.

He took a photo just after he had done all the outline and here it is. You can clearly see the old army of freshmen tattoo under it. 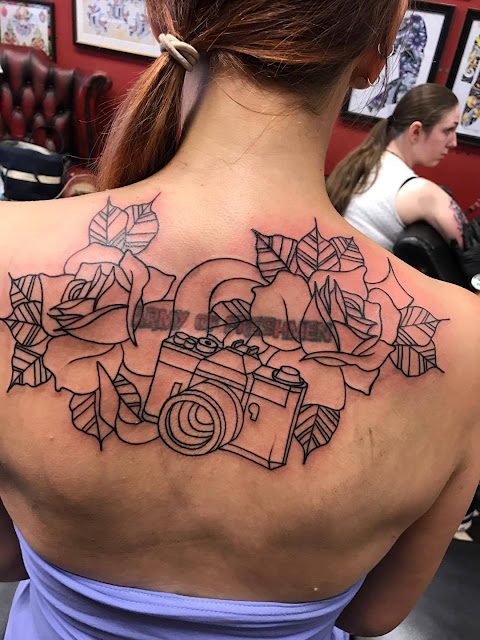 The second part of the 3 hours was meant to be the colouring in of the tattoo. But he only managed to do the shading on the camera and roses and the black on the leaves. Leaving the tattoo unfinished and looking like this. 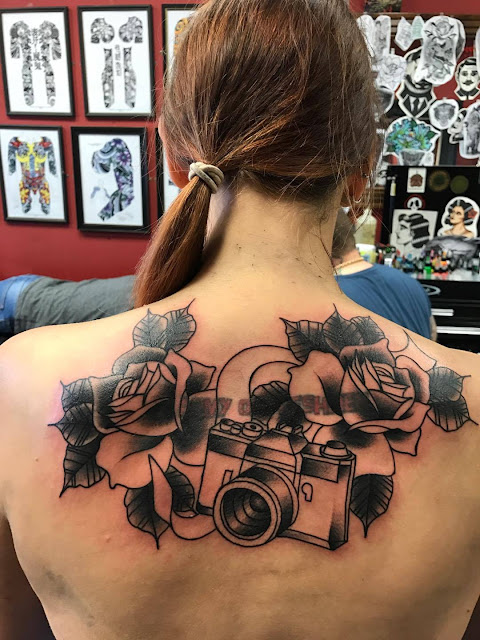 Which meant that I had to go back in for another session of 2 hours to have it finished. I actually dreaded the second 2 hours. The worst part of the 3 hours was the last half an hour because it was so tender that It was really starting to kill. I had it in my head that it was going to hurt more this time as it was going over parts of a tattoo that had only just healed.

I was wrong though and it really only felt the same amount of pain as the first time. In fact It may have hurt less this time. So this second session we got the roses filled in and the film running through the middle done. BUT its still not finished and I have to go back to have the end of the leaves done green. Also to my disappointment, you can still see the outline to the words army of freshmen. Looks like a darker red is needed to fully cover it. So will need to go back and get that done. 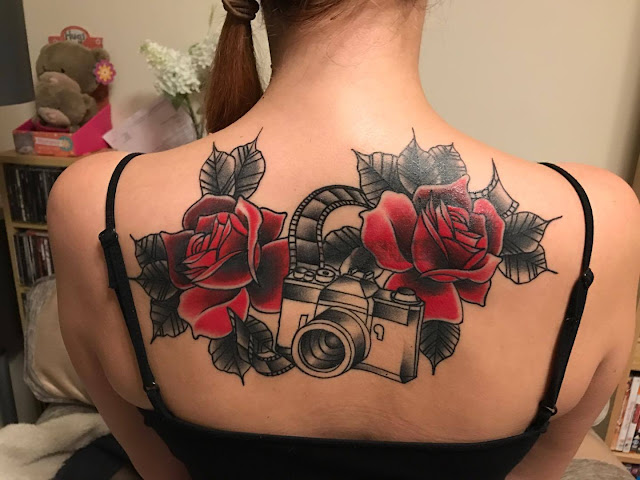 Overall it will have cost me nearly £300 to get done! Way more than I wanted to spend but not much I can do about that now. Here is what it looks like now. You will have to keep an eye out on my IG as when its fully done and fully healed I will pop a picture on there.

Do you have any tattoo's?
How did you find the pain?
Posted by LilysLittleLearners at 21:08