Walking is one of my favourite things to and since having Lily I have always encouraged her to come on walks with me and taken her to new places. She seems to really enjoy walking too.

While we was in Weymouth on holiday we decided we would go for a walk called the Rodwell Trail. The Rodwell Trail is a 3.5k walk which leads out to Sandsfoot caste. It used to be a railway line and is now disused and the train tracks have been removed and a path put in its place. But you can still tell that it used to be a railway line by some of the things you can spot around.

Lily and I set off on the monday morning along with my mum and dad. The start of the walk is very normal and there isn't much to see, but it is very peaceful and you are surrounded by tree's which is nice. 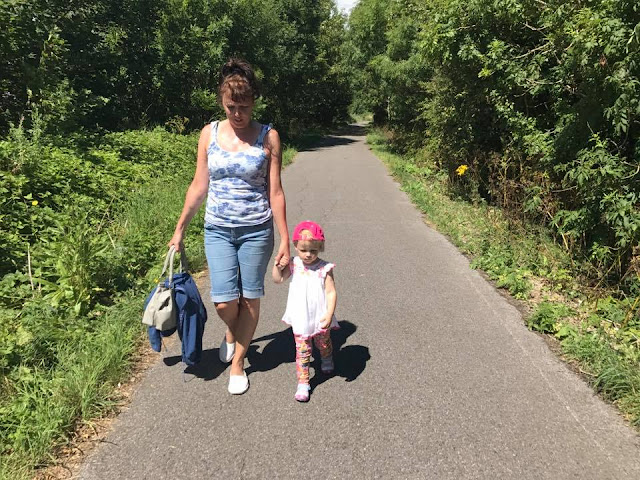 Soon you come up to a massive tunnel. Lily was a little daunted by the tunnel as it was a lot darker than the bright sunny path but she eventually walked in holding onto her Nan's hand and when she was in the tunnel realised that it wasn't that bad. Its quite cool being in the tunnel and you can just picture a train traveling through there in the past. It made a great echo noise as we shouted out words which Lily thought was great. 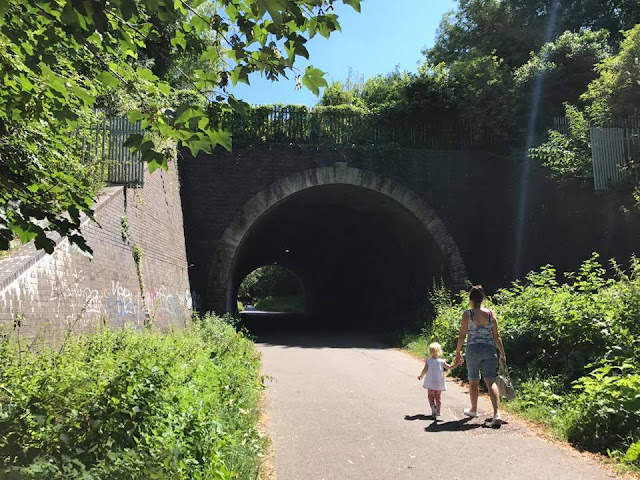 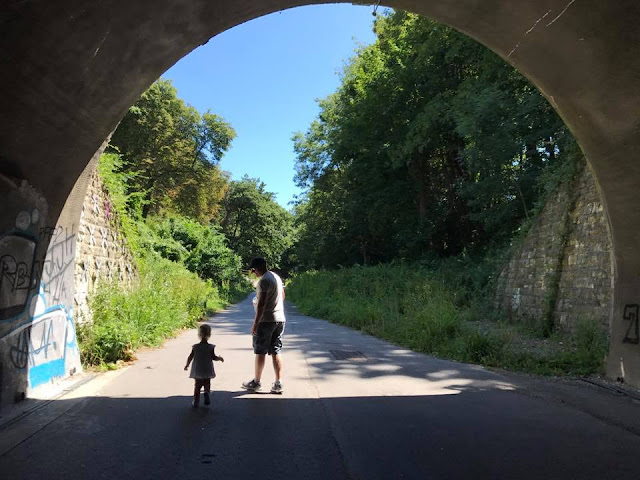 When you carry on walking a long the road you come to your first platform. At first you wouldn't recognise it as a platform as its quite overgrown and it just looks like a wall but when you stop to look you can see the shape of it being a platform. The railway would have been used at times during the war and you can just imagine soldier's waiting there about to board their train. 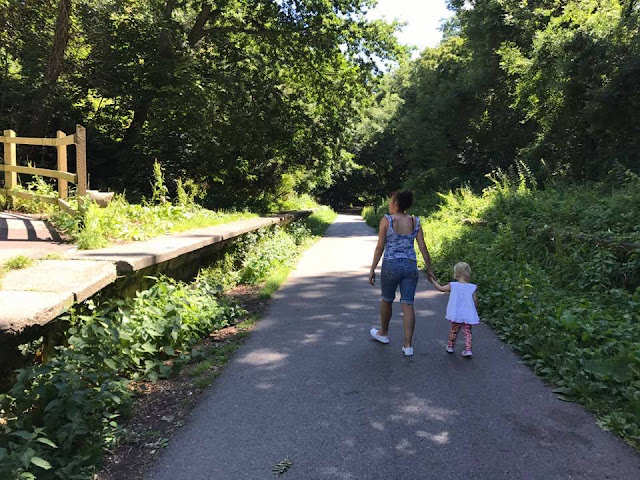 As you carry on along the walk there is lots to see. There are sign posts as you go along and some have animals carved in, pictures of castles carved in and one had Henry Viii carved into it. Reason for those carvings would be because you are heading towards Sandsfoot castle which was built by Henry Viii. There are also signposts which you can look at to see what birds you may find flying around and what other animals may be hidden in the woodlands that around it. You very soon come up to a bridge that is built with a nice old red brick. Lily and her Nan decided to hide behind one of the posts of that bridge and jump out and say BOO!
As you carry on a little further you walk through some tree's that compleatly hang over the path. Suddently the path is really dark and only parts that are lit are the parts where there is a break in the tree's and the light is shinning through. It almost feels like you are in some sort of deep woodland. Soon you get to the next platform which says Sandsfoot Castle. 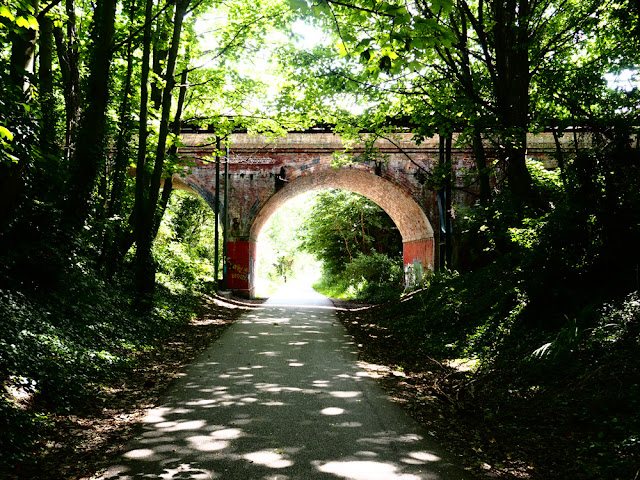 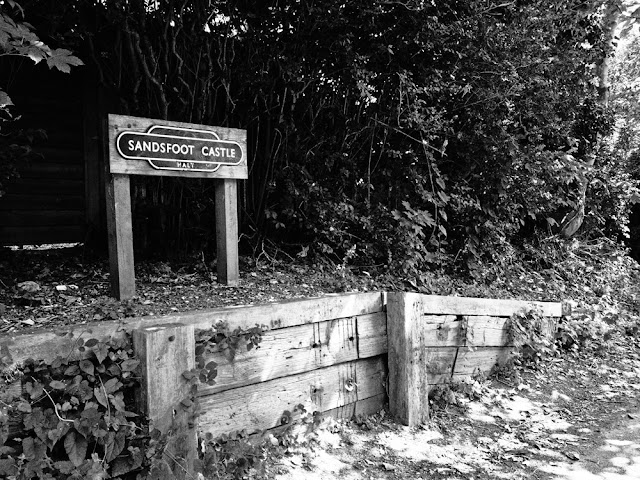 Soon you have a choice to go either to Sandsfoot castle by taking a little path off the trail or carry on a little further which brings you out to view Portland. It is such a nice view and one time me and my dad carried along it and ended up down by the sea where we went on a little adventure. This time we decided we would head to Sandsfoot Castle and so took the little path towards it. 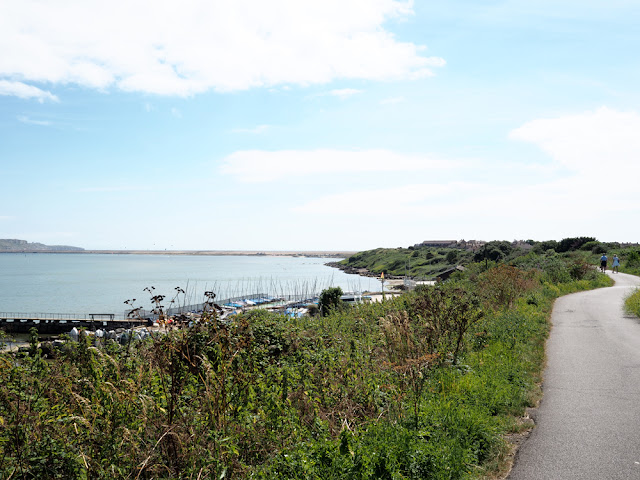 We had a little break here as Sandsfoot Castle sits in a really pretty garden with a cafe. We all got some drinks and Lily had a biscuit which she really enjoyed. The gardens are beautiful and really well maintained, there is a really pretty pond with water lillies floating on it and also some palm tree's which Lily liked. 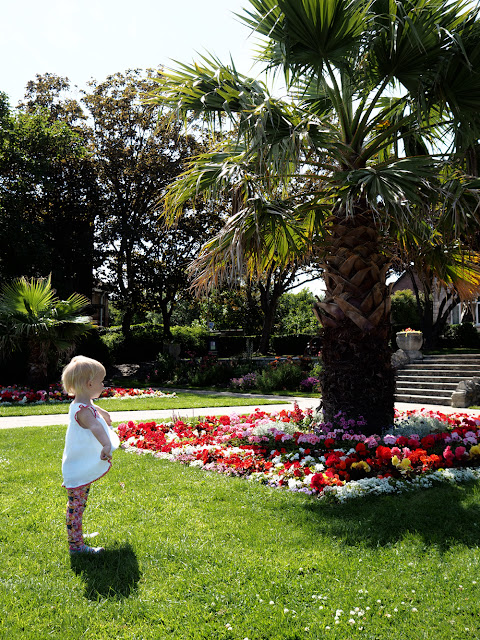 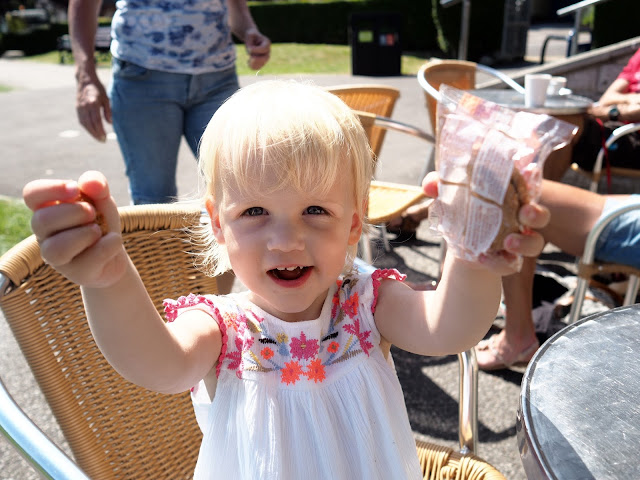 As soon as Lily saw the castle she was super excited! She loves castles, especially as she see's one in her favourite show Ben and Holly. She ran to the castle really fast and just before she went inside I got her to show me how excited she was to see the castle. As you can see from the photographs the castle is a slight ruin now and is very old. It was built by Henry Viii as a guard castle to guard that particular shore of England. I really do love how its sits so strongly still and having it in the gardens really makes it stand out. 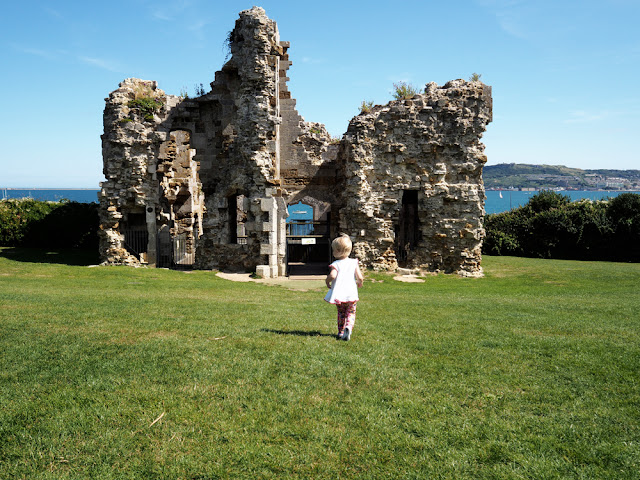 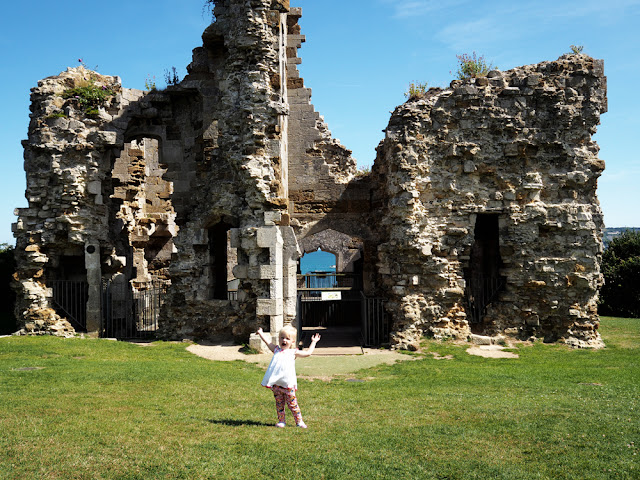 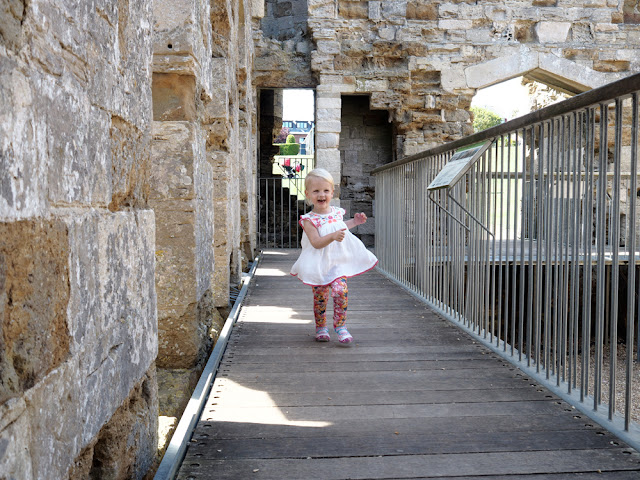 Overall this walk is a really nice walk and I really enjoyed it. There are so many nice walks in weymouth but this one is really interesting and really different to the others. Its a really nice walk to get away from busy streets and just be surrounded by nature. The castle is a really great place to end up at too. After such a nice long walk its great to stop and have a drink at the cafe and then what an exciting end to a walk to be greeted by such an amazing castle.
We can't wait until we visit Weymouth again and hopefully re take this walk.

Posted by LilysLittleLearners at 20:04