We were recently sent a snoball pack from Zimpli Kids to try out. Everyone loves snow and so who says you can't have snow in summer.

Zimpli Kids have made a special kit to make your own sno so then you can have sno ball fights in summer time. Sno is Zimpli Kids own version of snow that is almost exactly like snow itself.

When I first received it I was a little unsure. How can snow come in a packet. I also wondered if Lily would enjoy playing with it. She can be a little funny with touching new textures and wouldn't even touch real snow. 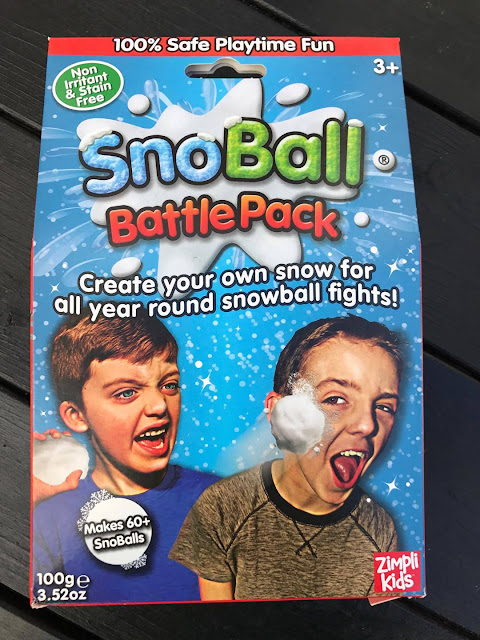 Inside there are 4 little bags of white powder. The instructions tell you to mix this with water and stir until it turns into sno. This is exactly what we did. At first it didn't seem to be looking like snow but after giving it a really good stir it really did look like snow. Lily enjoyed stirring the bowl. We then took our bowl of sno into the garden ready to have a sno ball fight. 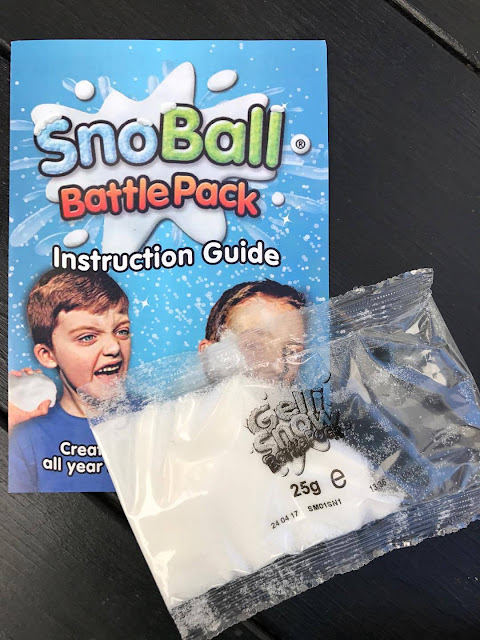 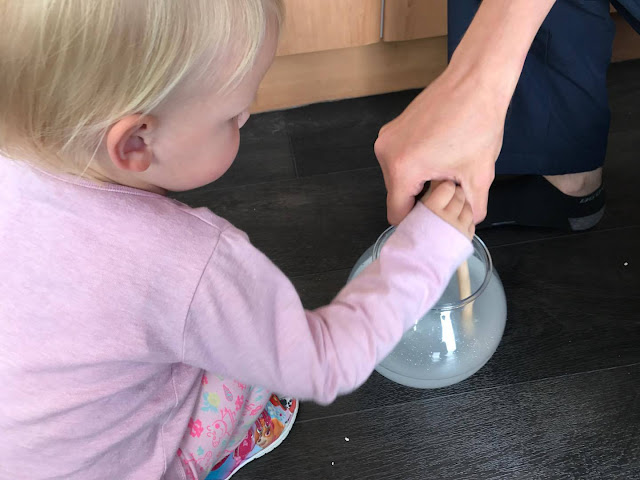 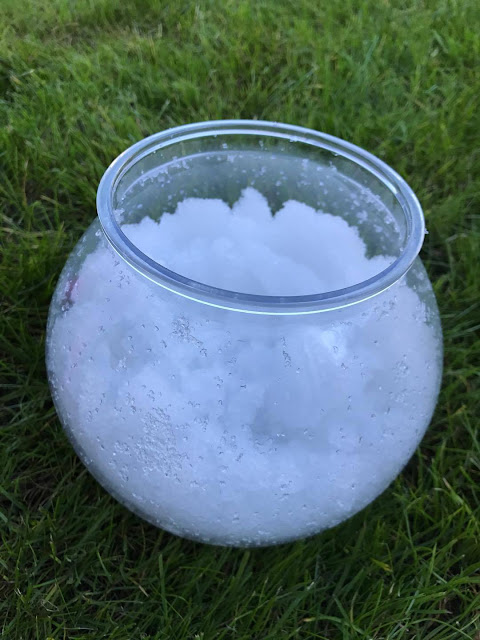 The texture of the sno looks like it is going to be crunchy, like ice. Its actually not and it has more of a jelly consistency. I really didn't think lily would touch it but she quite happily put her hand in the bowl and took out some snow.

I taught her that you have to throw it at each other and that was it then, every two seconds I was getting pelted with sno. She found it hilarious when I threw it at her and she found it just as funny to throw it at me and daddy. 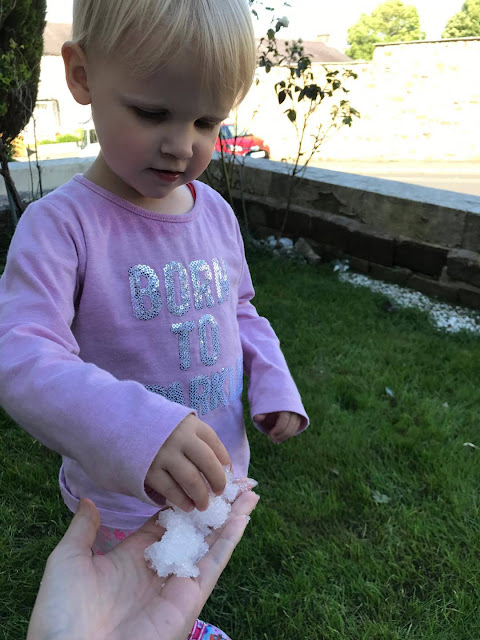 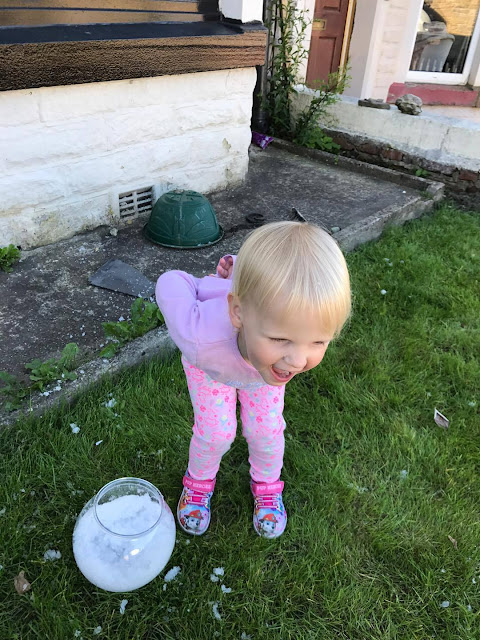 I didn't count how many snow balls we got from the mixture but it was definetly a lot. It says it makes 60 snoballs on the front of the packet and that could be true.

The great thing about the snoballs is that they are not cold, and don't make you wet when you get splattered with them. Lily just loves chucking it into the air and watching it fall back down. She spent ages throwing it about and also started to throw it against the wall. 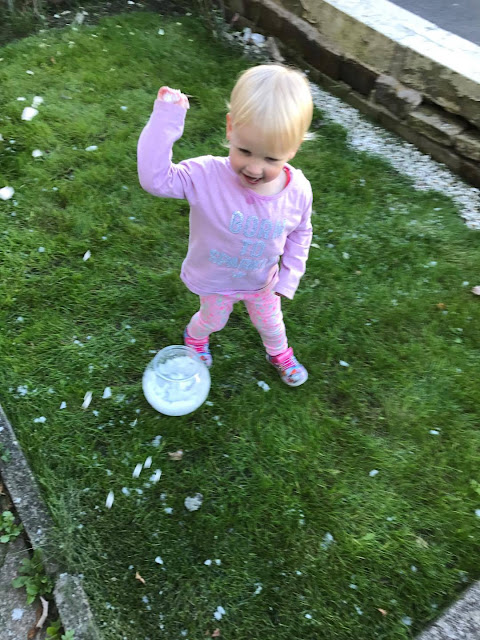 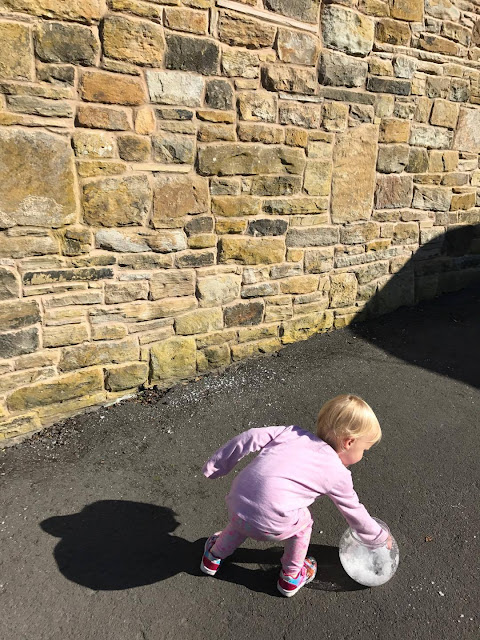 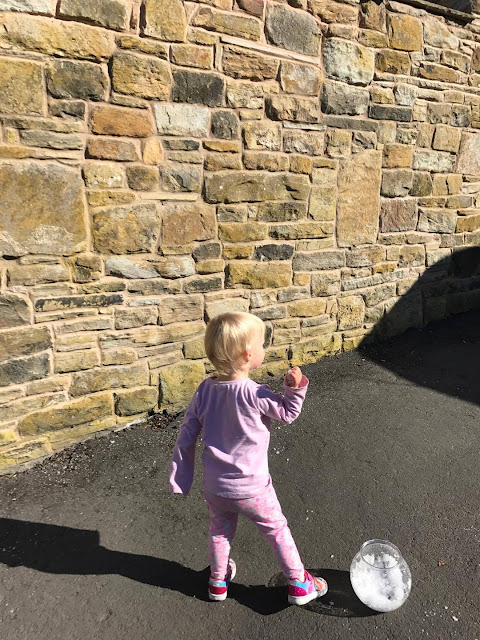 After all the sno was used up we came back inside and washed the bowl out. You can either pick up the sno from the floor (or as much as you can) and put it in the bin. Or you can leave it as it is bio degradable. We did this activity on sunday though and i'm writing this post 3 days later and it has rained since, but some of the sno is still there. So you need to do it somewhere that you don't mind seeing it on the floor for a few days.

The Sno is 100% safe to use and child friendly. It wont Irritate their skin or leave any stains on clothing.

These packs are recommended for 3+ but Lily is only 2 and a half and she loved it! I think as long as you are with your child while they are playing with it then its fine to have.

A SnoBall Battle pack is £4.99 and you can buy it from the ToysRus store. Head to the Zimpli Kids Website to see more and follow the hash tag #SnoBallsInSummer to see more pictures of how fun it can be.

Do you think you would enjoy snow balls in summer?
Posted by LilysLittleLearners at 10:00