Panto On the Pier Blackpool - The Wizard of Oz

Well Im about to tell you all about one that I went to see last wednesday at the North Pier Theatre in Blackpool.

We were invited to come and see the show by the wonderful Reece Sibbald who plays the Scarecrow for the sixth time in this fantastic show. 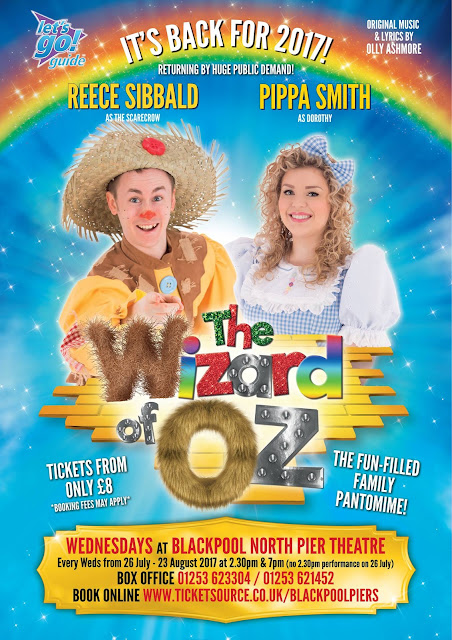 So on the afternoon of Wednesday the 26th we jumped in the car excitedly and we were Off to see the Wizard! I wasn't too sure on what Lily would make of the pantomime. It was her first one. But understanding the concept of what a show is, she was very excited to be going to see one.

We arrived at the pier, the sun was shinning and we headed to the end of the pier for the 7pm show. 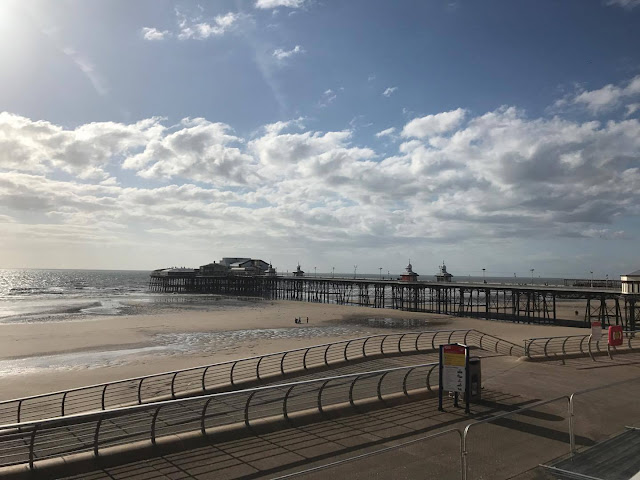 We got there a little earlier and were shown into the Theatre at 6.15pm. That did mean we had to wait a whole 45 min before the show, and Lily did get a little bored but it meant we got first choices of where we wanted to sit. We sat somewhere between the front and the middle of the theatre. We had a great view of the stage. The Theatre does fill up quick so a early arrival is definitely recommended.

The Panto started with a great welcome from Reece Sibbald who was the scarecrow. He got the crowd involved from the start of the show and really captured everyones attention. There was already laughter in the audience as he started to make jokes that were funny for the children but also the adults.

Then it was time to introduce some of the other cast of the Wizard of Oz and get started with the show.

The performers all looked great in there costumes and all put lots of enthusiasm into keeping up their character. The stage was colourful and backdrops wonderfully designed and perfectly fitting for the wizard of oz. It all looked fantastic and you could tell that all the the children in the audience were really enjoying the show.
Dorothy was delightful, the Tin Man entertaining and the Cowardly Lion was giggle worthy and made me smile as his legs trembled in fear. The good witch had such an amazing dress on and looked beautiful and the Wizard himself was such a character and did his performance so well.

I also must mention the large group of young children who all played the Munchkins. Watching them really took me back to my childhood when I used to be up on stage singing and dancing in the local panto. I think it is lovely to still involve a large group of children in a panto and they all did such a good job. 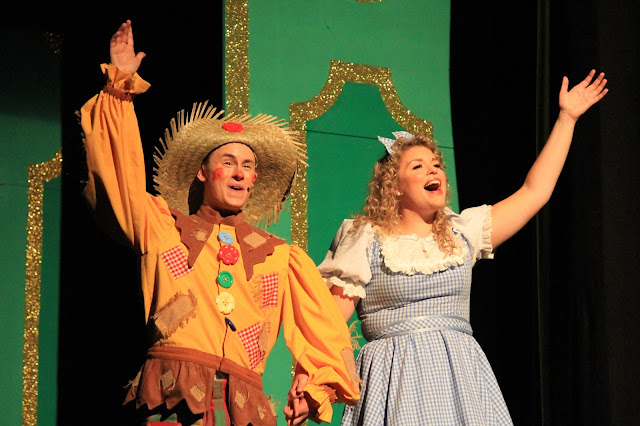 There was lots of singing and dancing and Lily really loved this part to the pantomime and danced a long. All the way through jokes were made by funny man Reece and he had me and the audience laughing the entire way through. In fact at one point he actually made me have tears of laughter. Everytime he was on stage he kept the panto lively and really captured my attention.
They stuck to the storyline great but they did add in lots of other silly parts that just got everyone giggling. There were times in the show where you could not tell if it was meant to happen. For example the scarecrow at one point slipping to the floor. But thats the great thing about a pantomime, things like that actually make the performance better to watch.

One of the best things about pantomimes are that they aren't something you have to sit there quietly watching. They got the audience involved with the classic lines like "he's behind you" and got the witch arguing with the audience with "yes I am" and "oh no your not". I am very glad that I didn't choose the front of the theatre as there was plenty of times where the audience got... well, Lets say some nice surprises! 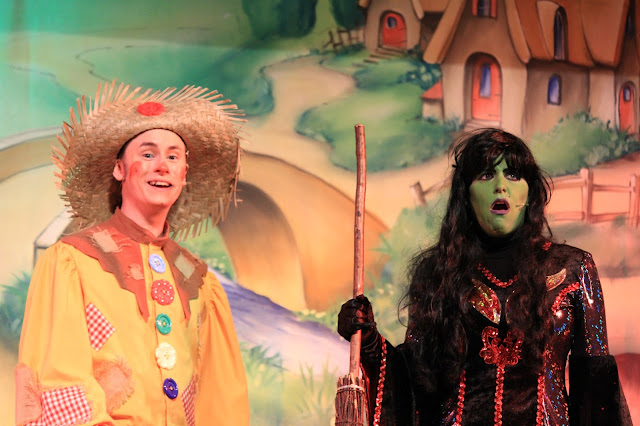 The witch played a really good witch. She had one of those witchy voices. You know ones where they go right through you because they are THAT witchy. She sure could do a good cackle to! The only thing I would say about the parts where the witch comes on is that there was to much smoke. It made it hard to see what was going on on stage at times and also was making my mum cough a little. I think its great for dramatic effects but as the witch comes on stage a lot during the performance I think it was a little too much. 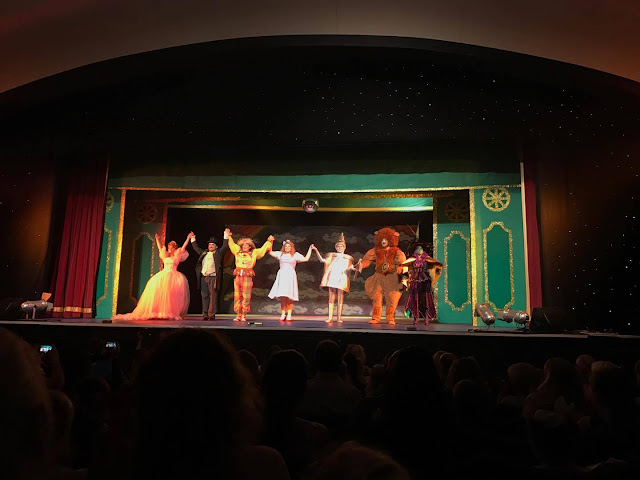 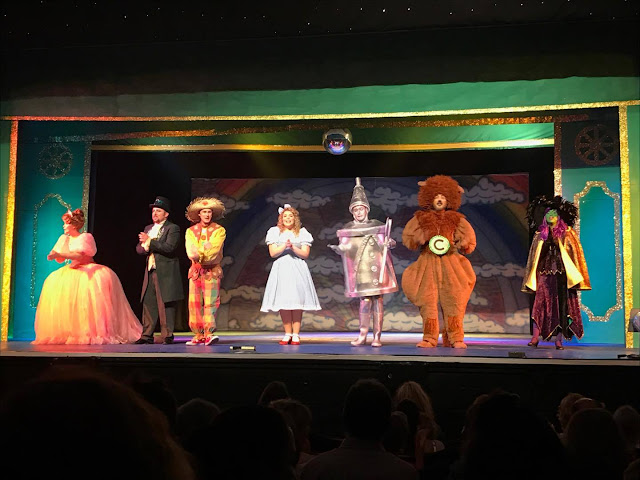 Over all the show was fantastic and me and my family really enjoyed it. Lily enjoyed most parts although got a little scared each time it went dark. But that could not be helped as the sets on stage needed to be changed.

After the show I got a chance to meet some of the performers and got this brilliant photograph of me with the scarecrow and dorothy.

It wasn't to many moments after that photograph was taken that the sky went dark and some real Wizard of Oz action took place with a storm coming over us. It did leave me laughing at the thought that the Theatre had planned the storm for the special effects! 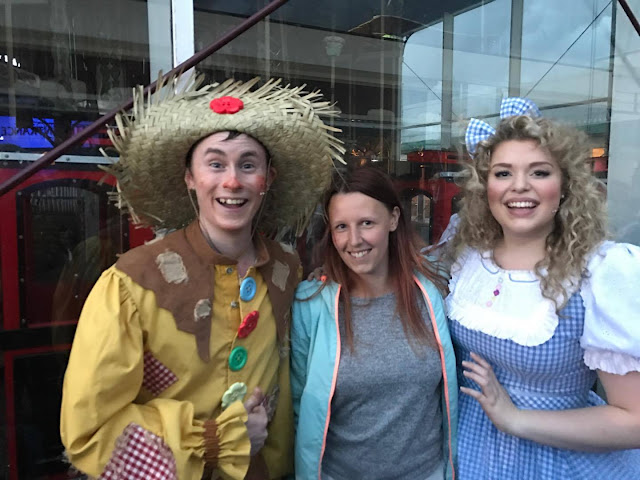 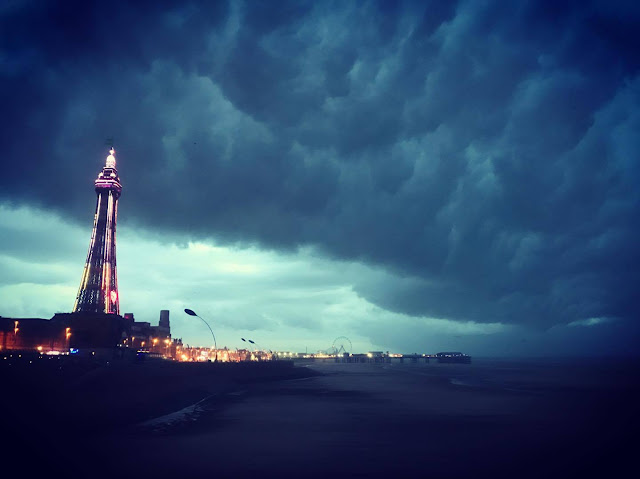 We had such a great evening and it is something I would definetly take Lily back again to see when she is a little older.

If you would like to see this show it will be performed every Wednesday until the 23rd of August. Tickets are priced at £11 each or £27 for a family of 3 or £32 for a family of 4.

Head here to buy your tickets now and don't miss out! Find out more on the Panto At the Pier Facebook Page.

Ever seen this show? Would your children enjoy a show like this?

Posted by LilysLittleLearners at 15:25