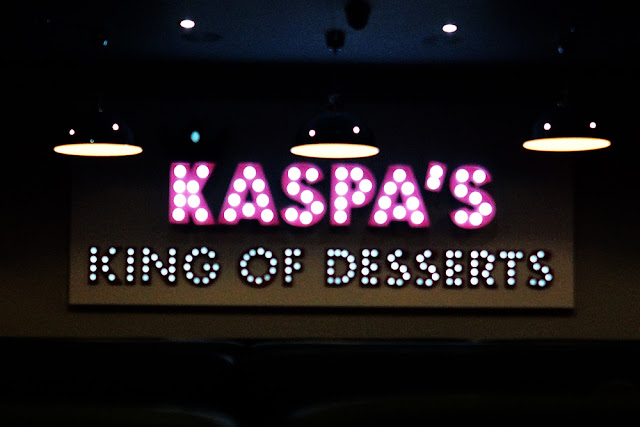 Last Friday, Kaspa's Desserts set out to shake up the city of leeds! How? By opening there doors to a new dessert restaurant.

Kaspa's have around 60 locations around the Uk and this is their 2nd store to be opening up in Yorkshire.

On Friday at 7pm they were ready to launch and open their doors. But not before holding a special private event especially for us bloggers.

I arrived at 4pm at the Leeds Core shopping Centre where the Kaspa's is based, not knowing what to expect. I have never been to a Kaspa's before and so all I knew was that it was going to be a sweet experience as we were going to be trying out their new dessert menu. 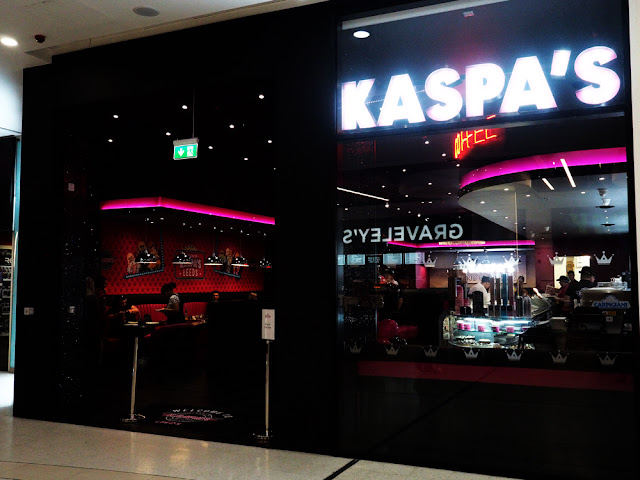 When I arrived I was very impressed with the new stylish pink and black restaurant. It has pink and black leather seats and booths with pink walls and sparkles everywhere. The floor glistened with sparkles too and there was the sign Kaspa's King of Desserts lit up for all to see.

It really is somewhere you must see for yourself, and your bound to be impressed when you walk along the red carpet passing a huge selection and choice of desserts. I sure was!!

There was huge cakes and tons of flavours of gelato on display. It was an array of colours and was really making my mouth water. 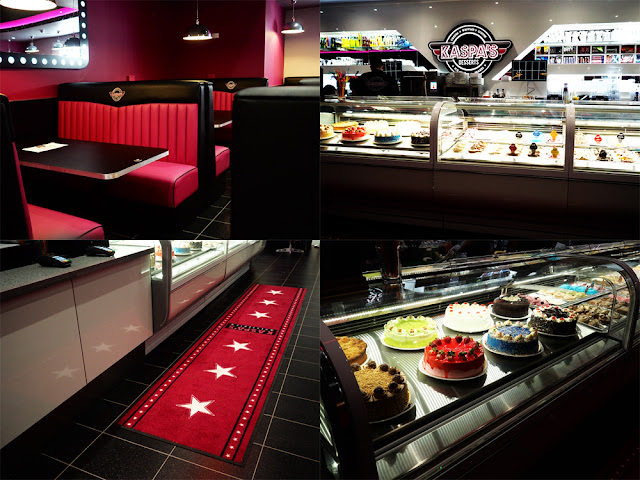 So I sat down and was offered a drink. I went with a nice refreshing J2o. I had a good look at the huge menu while I sat. You think there is a lot on the counter, just wait until you see the Menu. It has so much to offer. From Waffles, to Crepes, Sundaes to crazy colourful Milk Shakes. It all sounded so different and so good with a mass of different flavours.
The prices were great too with waffles and crepes starting from £4 and sundaes from £5.95. Definitely a price I would pay for a dessert. 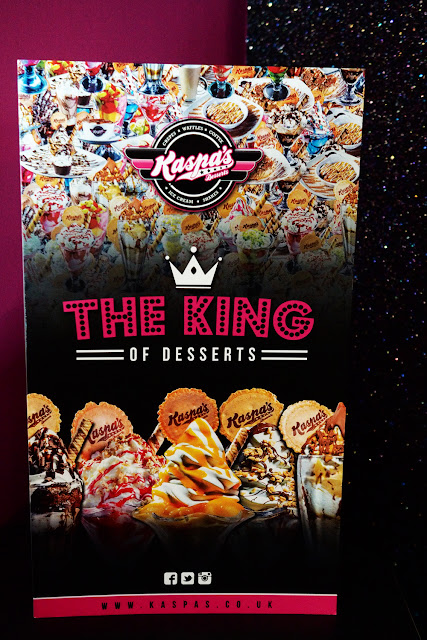 So we were told that we were going to be sampling this menu. Not before long a waitress started to bring out some dessert. Yum!! It was a Banana Split Sundae. As she placed it down on the table my first thought was wow this is HUGE! I then heard her say the words "for starters" STARTERS! Wow. I think my Sugar levels were about to hit the roof. Not that I was complaining.

The Sundae looked delicious. It has a ton of cream on the top with nuts and sauce and wafers. I dug into it. It tasted as good as it looked, a perfect mixture of Vanilla Gelato and Bananas. As I dug deeper into the dessert I also found some chewy little pieces of something. Caramel maybe? Nugget? Fudge? Either way what ever it was it was tasty. 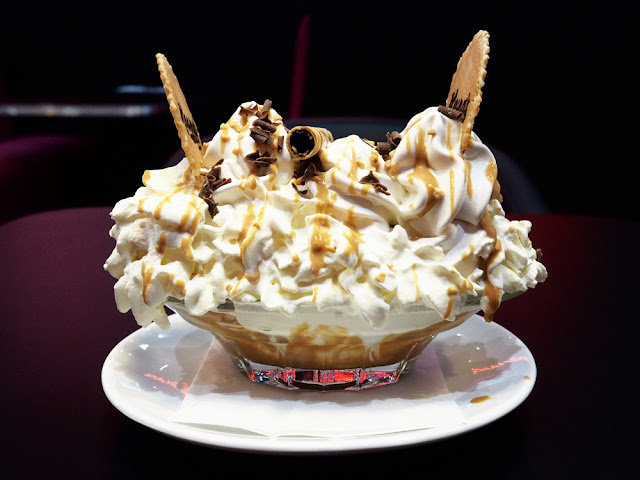 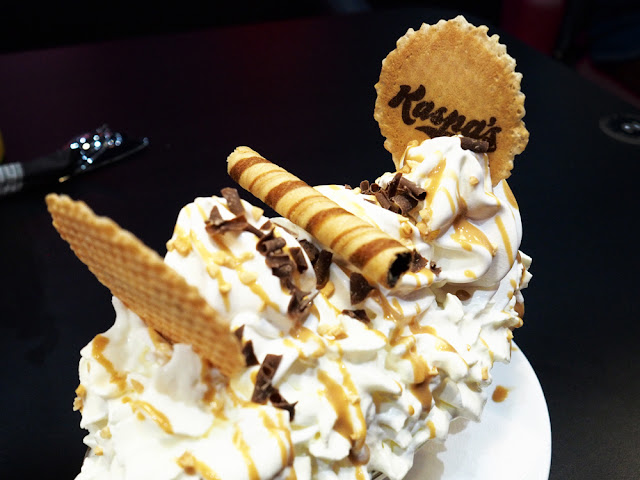 I ate all the wafers from the top and ate quite a bit of the dessert but after hearing the word starters I thought I better save some room for the main corse. Little did we know, there wasn't exactly a MAIN corse. But 4 courses of great proportion. It was when the next dessert came out that I realised I was about to hit the sugar load!

Next onto the table was a Waffle, piled high with strawberries and covered in chocolate with cream on the side. Oh Yes I thought. Now we are talking. Strawberries and chocolate, a girls best friend right???

It was amazing. The size of it I could not believe, it was huge. I dived straight into it and it tasted soooooooooo gooooooood! I had died and gone to heaven. Every mouth full made me want more. The waffle was perfect in texture and the strawberries perfectly sweet. I really did nearly eat all of it when I remembered there was another 2 courses to come yet. 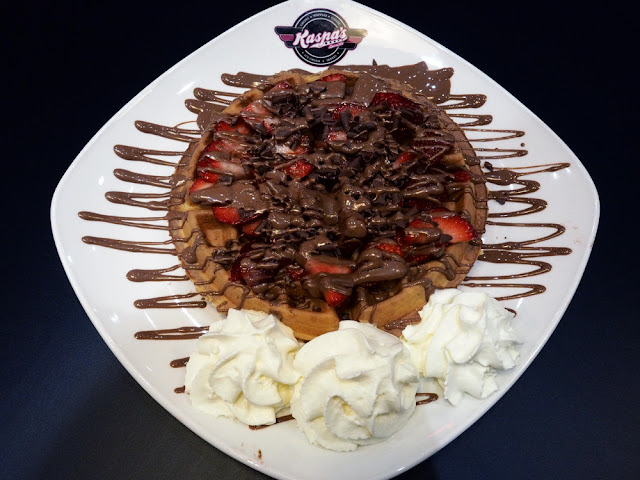 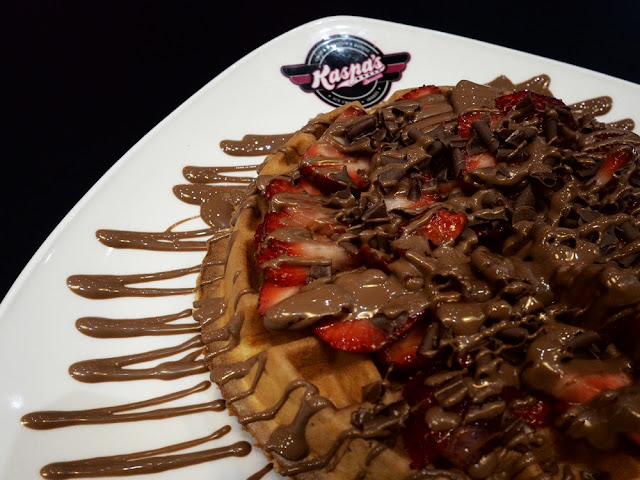 I heard that next was going to be crepes. I do love crepes. I was having a joke and laugh with the others bloggers there saying that its going to be the size of the table. Funnily, I wasn't wrong. The Crepe was folded up but I bet if you unfold it then it would be huge!

In front of me now was a white chocolate filled crepe. Lately I have been a big fan of white chocolate so I was ready to indulge on this. The crepe had so much melted chocolate on the top and when you put your knife in it to cut it, out ran even more white chocolate. It was full of it. It really was so delicious and the crepe was the perfect texture and thickness. It was so super sweet though and I didn't even manage half of it. That could of had something to do with the giant waffle Id just had before though. 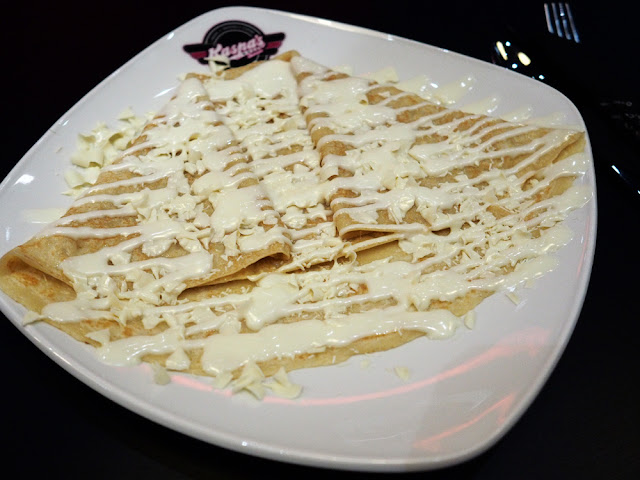 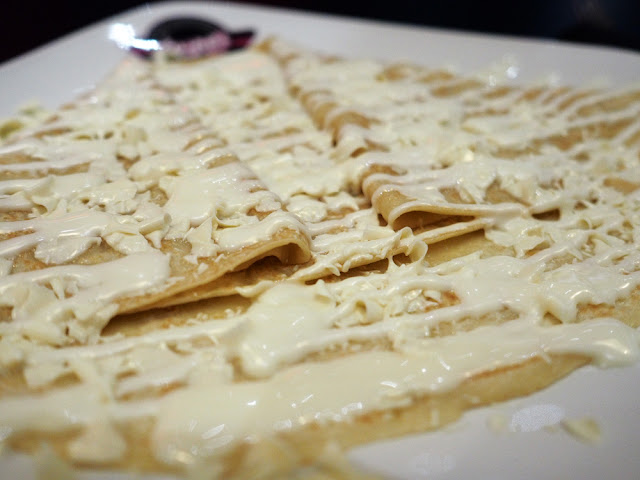 So we are finally on the 4th corse. Some cake and coffee. Surely this is a nice cup of coffee with a small slice of cake on the side? Boy was I wrong. I keep using this word but the cake was... you guessed it... HUGE! Not only was it huge but it was also very blue! Bubblegum cake! Wow I didn't even know that existed. It was covered in blue icing and blue sauce and lots of colourful sweets. The plate also had sauce on it and 2 bubble gums. What a treat! At this point I think my sugar levels went through the roof from just looking at it and I knew that this was going to make me buzz for the rest of the night. Again, not that I was complaining.

So I tucked into the cake. Im not a great fan of cakes but this cake was perfect. The texture was so soft and not dry at all. It was lovely and sweet and was full of flavour. Such an impressive slice of cake all around. 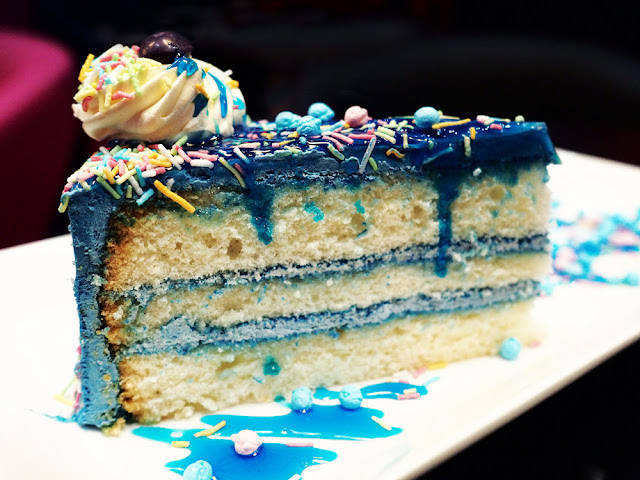 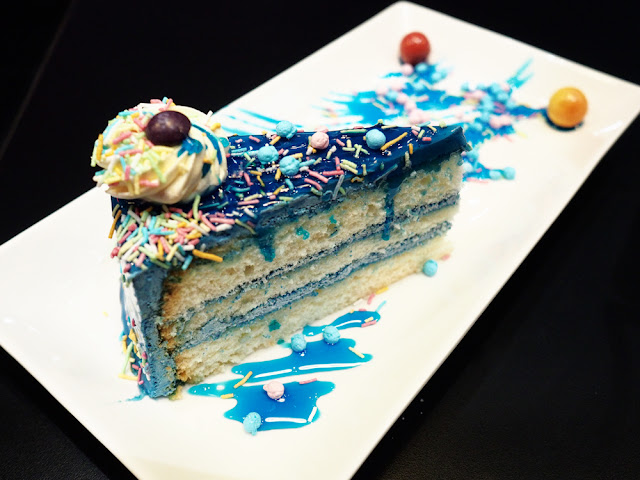 There was so much on the menu that I would of loved to have tried and definitely will be going back for more. I just think I may have to stick to one corse next time. I had such a great afternoon at Kaspa's and they have made a new fan out of me.

So if you are a fan of desserts and only want the best. Then head to Kaspa's Leeds and spoil yourself! You won't regret it. 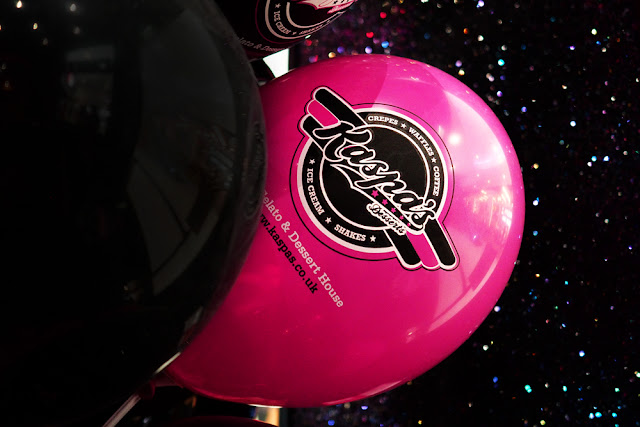 Have you ever been to a Kaspa's before?

Do you think you will be visiting now?
Which of the desserts do you like the look of the best?
Posted by LilysLittleLearners at 09:30