Did you know that this week is #NationalPicnicWeek?

It definitely came at the perfect week as we have actually had some nice weather and managed to head out for a picnic. We were super lucky that I also had a Nuby Picnic Bundle ready on stand by, which they sent me to review.

Nuby has a fantastic range of baby and toddler tablewear and not only are their products great for every day use. They are also perfect for picnics. 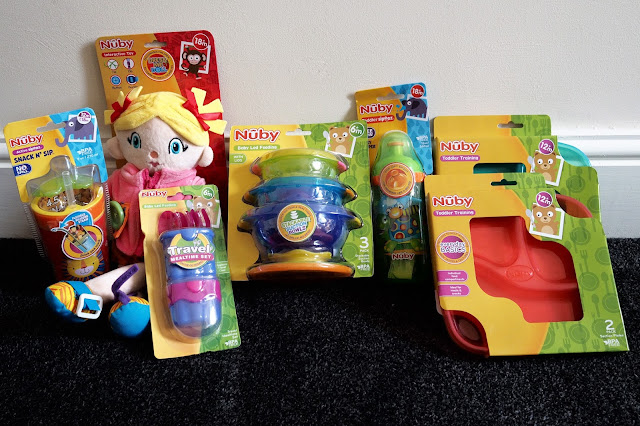 I was really happy that the dress me dolly was in the bundle. Who better to invite to our picnic than a lovely dolly. Lily was so impressed with her and gave her a big hug as soon as I handed her over. The dolly is such good quality. She is really soft and perfect for ages 0+. The dolls clothes all have little things that you can do to it. Such as zip up her top, fasten her shoes, and button up her pocket. Lily really liked the zip mostly and kept pulling it up and down. The dolly retails at £9.99 but if your quick she is currently on sale at a bargain price of £4.99!! I really couldn't recommend this doll enough and think she is a steal at both great prices. Also if you have a boy and not a girl, thats no problem. Nuby also do a dress me pirate doll. 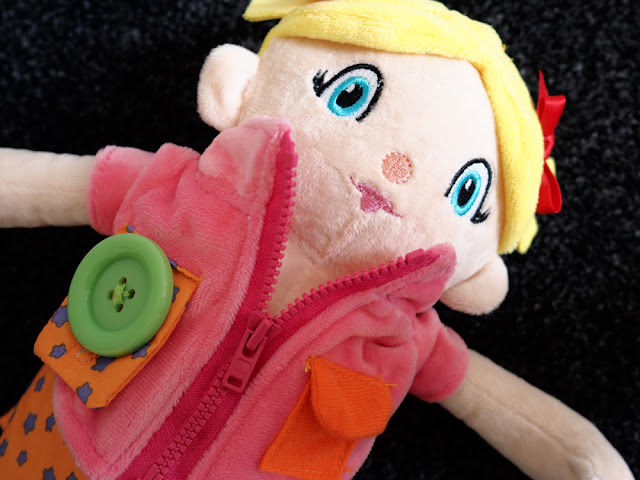 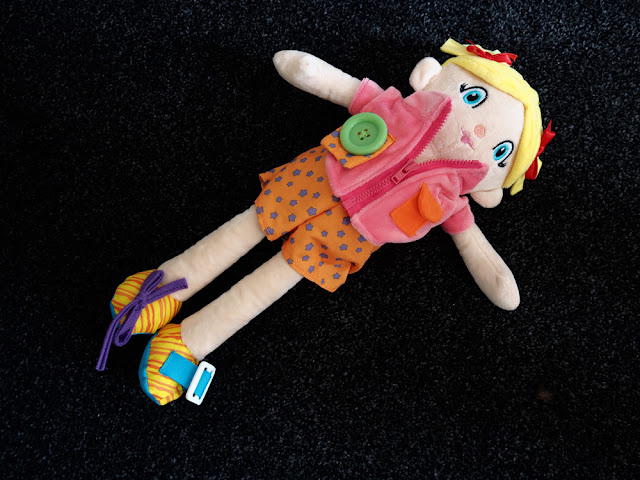 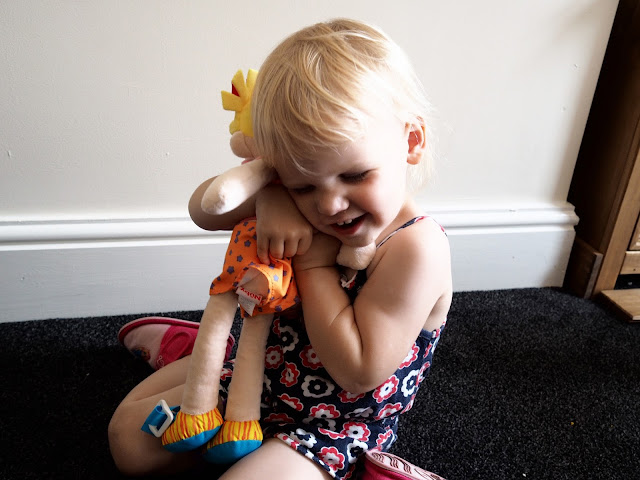 So first thing first is getting the picnic ready. I got out my stackable suction plates. These are great. I just love the colours and think they are perfect for storing in the cupboard after using them. They have 3 different sizes and all come with lids. Which is perfect for picnics as well as storing other foods at other times. We don't really have much use for the suction part of them now lily is older but that part of it is perfect for baby's and toddlers that like to try and pull there food all down them selfs. I tested out how good the suction is on them and it is REALLY hard to pull them off, you have to sort of slide them off the table. It would be impossible for a baby or toddler to pull this over. This set of tubs retails at £7.49. 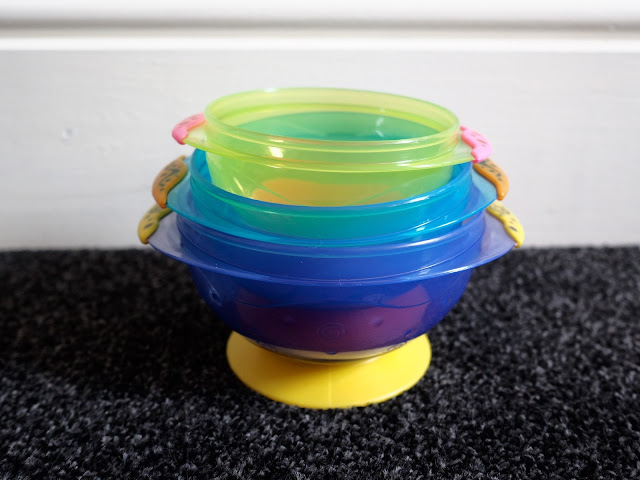 So I got the picnic ready and put it all in a bag and we headed to the park and I filled up all of the tubs. One tub I had yellow peppers and tomatoes in. The second I placed Lily's sandwich in. The third I placed some cheese nibbles in. I placed lids on top of them all which easily snap shut on top of the tubs. They felt really tight and sealed. I had no worries that a lid may come off and spill out all the food. It was also good to know that the nibbles wern't going soft inside from the tubs sealing so well. 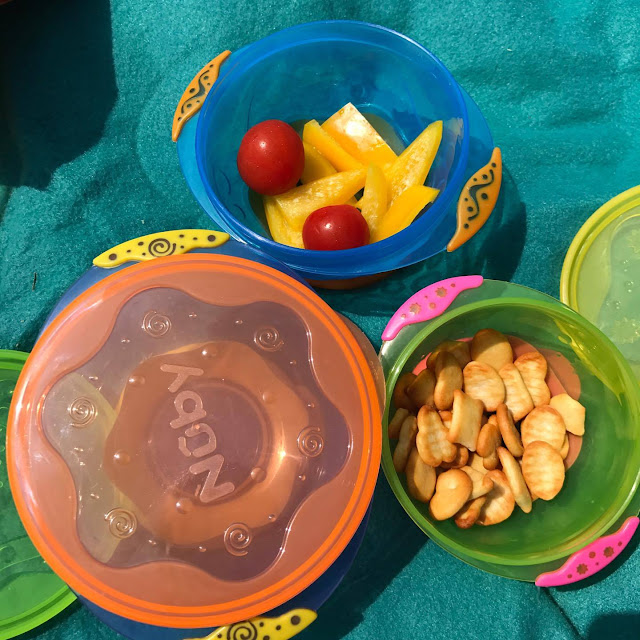 We got to the park. I laid out everything for the picnic. Me and Lily and dolly all sat down and lily handed out the sectioned plates. I love these. They remind me of trays you used to get your dinner on at school. Each pack came with 2 colours and so we ended up with red, orange, green and blue. Each plate has 3 sections. They are perfect for little fingers foods just like the type you get at a picnic. I opened up the tubs and Lily then shared out the food between herself, me and dolly. She placed the different foods in each different section, so she knew exactly what she was meant to do with the plates. The plates are all dishwasher, microwavable and steriliser safe so when not being used for a picnic they are also perfect for home use. Lily really enjoyed eating her picnic food from the plates. I think they are a great way to make it more exciting for your child to eat and may even help fussy eaters want to eat up all their food. 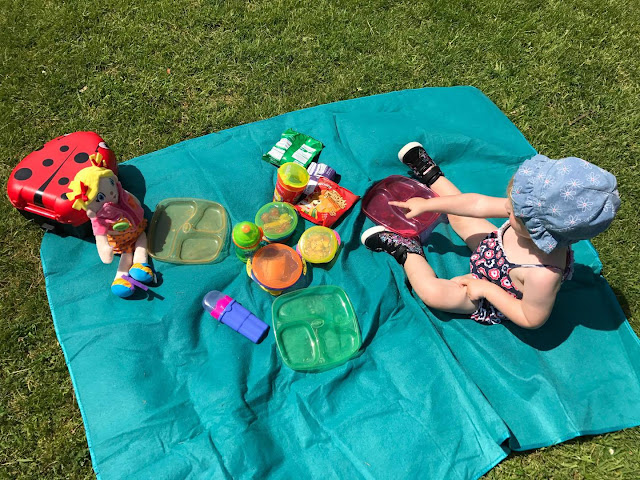 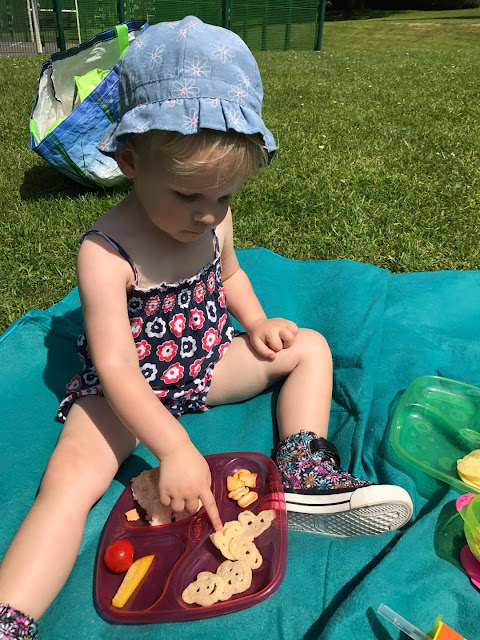 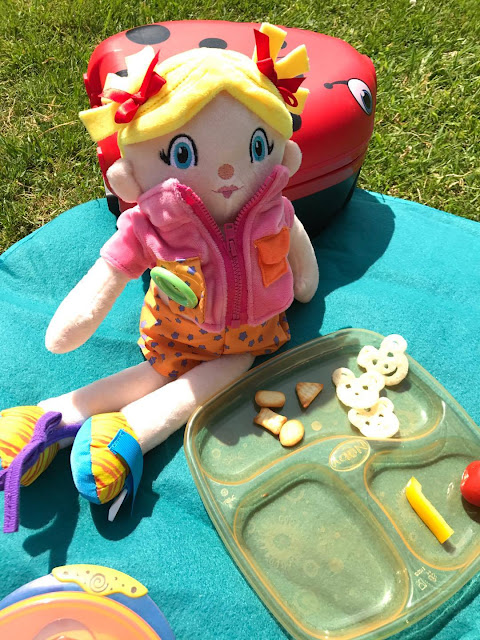 Lily then wanted to eat her peppers with a travel fork. The fact the forks come in handy little travel cases is great and makes them perfect for taking to a picnic. The lid snaps on tightly so they don't fall out. They are made from plastic and so not sharp and also a perfect introduction to using cutlery. The only problem was that the fork wasn't sharp enough and I had to help lily stab the peppers by pressing down on them really hard. I think they would be perfect for eating picnic foods such as rice, cous cous and pasta. The travel set is a bargain price of £2.49. 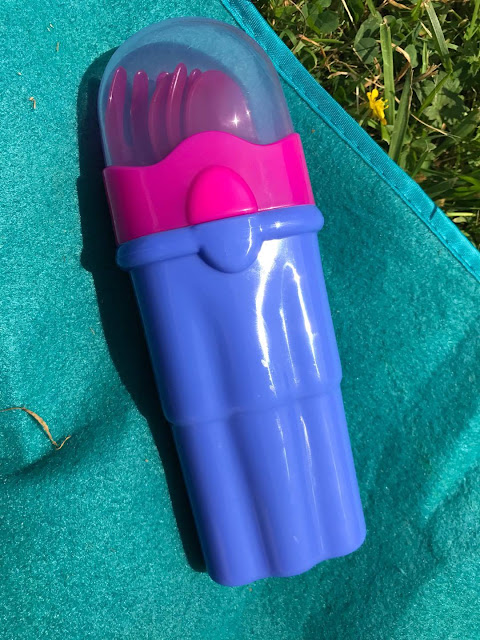 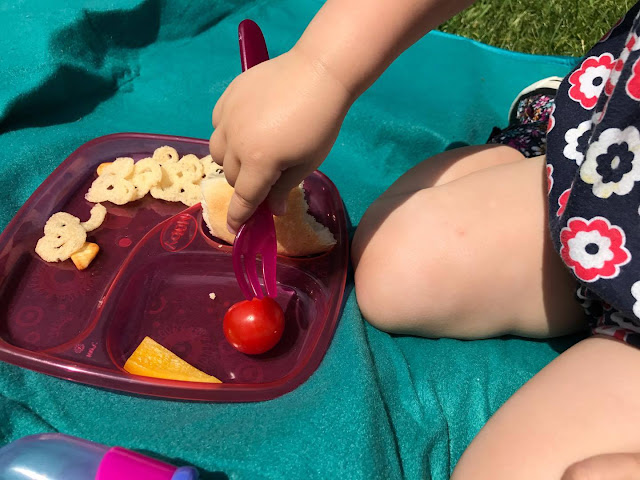 Soon enough Lily was thirsty. So I offered her the water I had brought in the busy sipper beaker. Lily can be really fussy with bottles but she loved this one. The colour design really attracted her and she found it really easy to hold, tip and sip from the spout. I did have to open it for her though as it was quite a stiff closing on the spout. Nuby have such a great range of beakers but this one Lily loved straight away and i'm really happy with it. It holds a good amount of water and is recommended for 18 months plus. It retails at another bargain price of £3.49 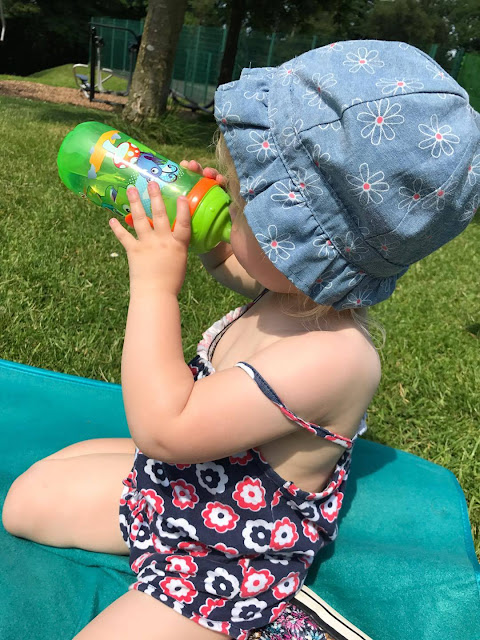 Lily eventually asked for some apple juice which is her favourite. I had brought some for her in the snack and sip cup. The snack and sip cup I think is so cool! You put the juice in the cup and then the snack in the top. You can be so creative and do all sorts of different combinations. So we had apple juice in the bottom and I placed some raisins in the top. I wish I would of had some apples in the house at the time as they would have been great to place in the snack section. I handed Lily the cup and said "here is your apple juice". She took it off me, looked at it and said "no I don't want raisins". I tried to explain to her that the juice was in the bottom and raisins in the top and that she wouldn't drink the raisins but after that she wouldn't try the cup at all. But as it was such a hot day and I was quite thirsty I tried it. I did love how soft the straw was in my mouth, but I did find that it was very hard to suck the juice out. Lily still won't try the cup so i'm not sure how she would do with it. But I did manage to have a drink and I do love the idea of having a snack with it too. Seen as Lily also wasn't eating the raisins I decided I would. So I went to lift the lid and as I pulled, the raisins came out everywhere. I have learnt with this lid to pull a little more gently. At least I know that it won't come open in my bag and the snacks won't come out everywhere. The drinks straw is also non spill which means is great so it also doesn't spill all over your bag. This cup retails at £4.49 and is recommended for 12 months plus. 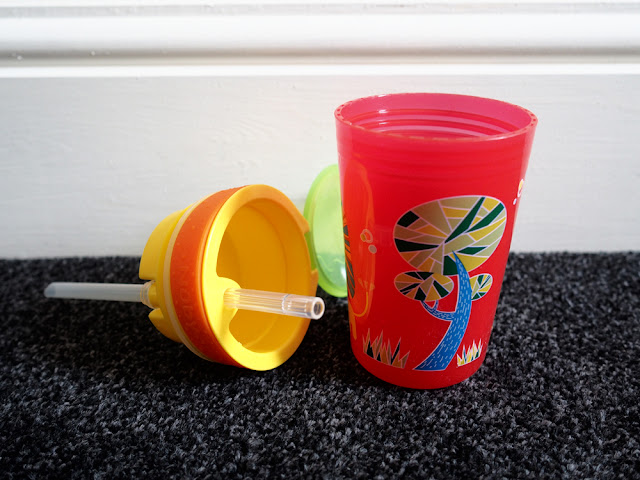 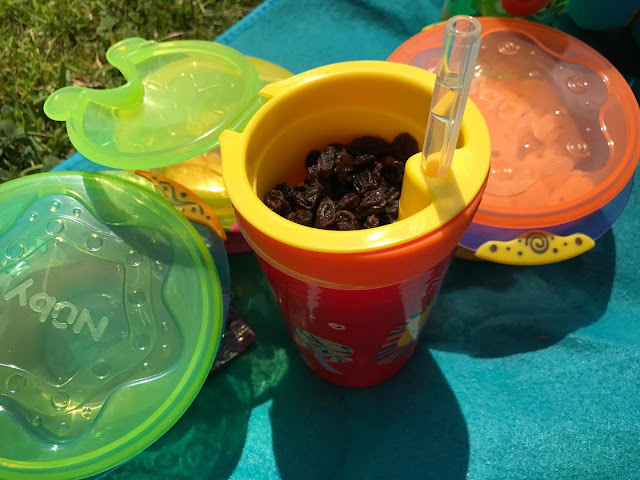 Over all we had a fantastic picnic and I really recommend using Nuby for all your picnic needs in the future. Head here to the Nuby website to see all the range.

If you are picnic ready now!!  Nuby have kindly let me give away an entire bundle. That means you win all of the above! Its worth over £30 and you can also choose if you would like the girl dolly or the pirate one. Enter now on the gleam app below for your chance to win.

Win a Nuby Picnic Bundle Worth over £30
Posted by LilysLittleLearners at 21:44