Our Summery Day out to Hebden Bridge

With knowing that today would be such a hot day, I decided I would take Lily somewhere new. We have been to the near by parks so many times now and I don't drive so i'm limited to some places I can take Lily for the day. But one place popped into my head that I used to always remember enjoying going to when I was a child. That place is a small village called Hebden Bridge. Its in yorkshire just outside of lancashire where I live and only takes 20 minutes by train. 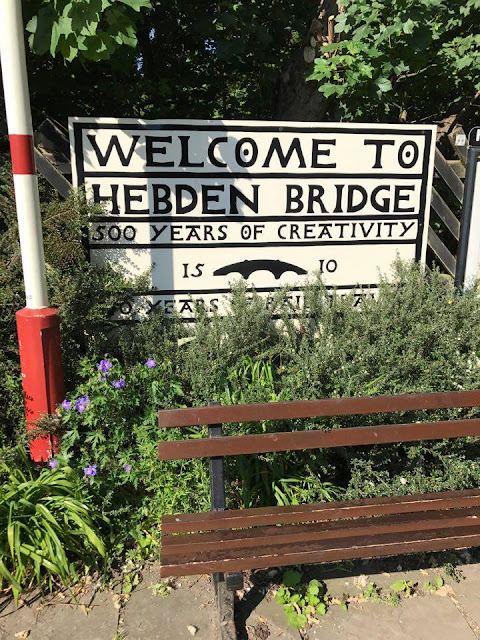 So I packed a small picnic and we headed off out to catch the train at 11am this morning.

I told Lily that we were going to be having a picnic and so the entire way there she was excited about that and was super well behaved on the train.

We arrived at around 11.30 and the first thing we did was head to the park. Next to the park is this huge area of grass where we decided would be the perfect place for a picnic. The area was so quiet and peaceful and there was really nice views of the hills where walkers generally head for a challenging climb. Lily complained when we got there as silly mummy had forgot a blanket. Tut tut, not much of a picnic with out a blanket. But I let Lily sit on my bag so she had something to sit on. 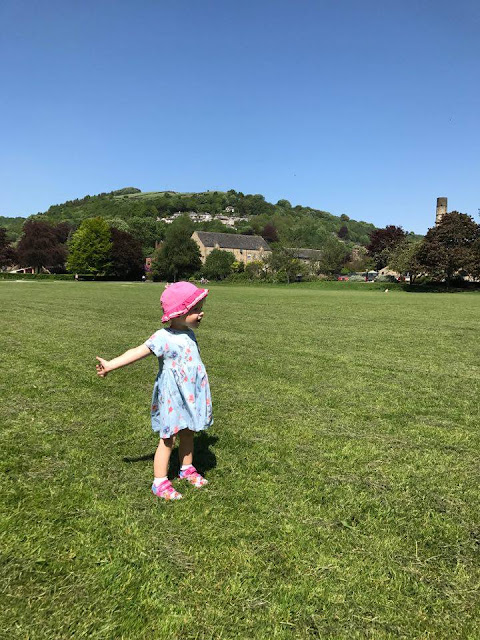 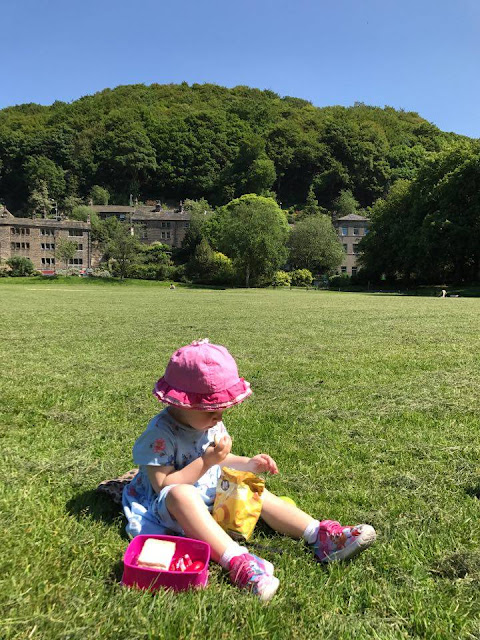 After Lily has eaten her lunch of cheese sandwiches, cheese crisps, and a cheesy babybel we headed to the playground. On the way Lily spotted the skate park. It was super colourful with graffiti all over it and Lily really wanted to go and see. This is where I have realised that my daughter can be a little poser at times. Look at her seeming like she is walking a catwalk haha.
The skate park is great and really big for if you have a little skater in the family. 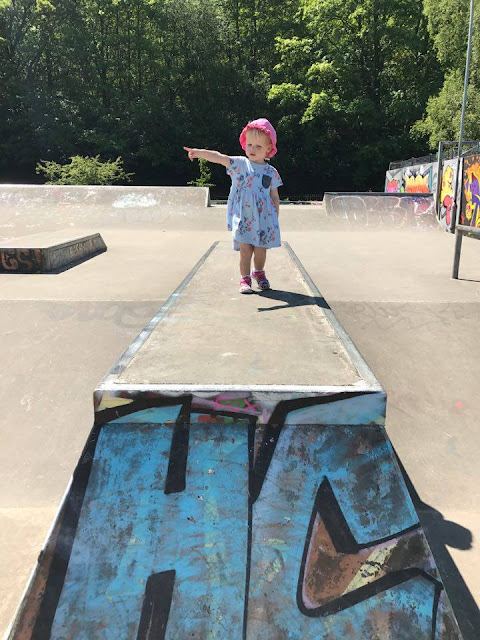 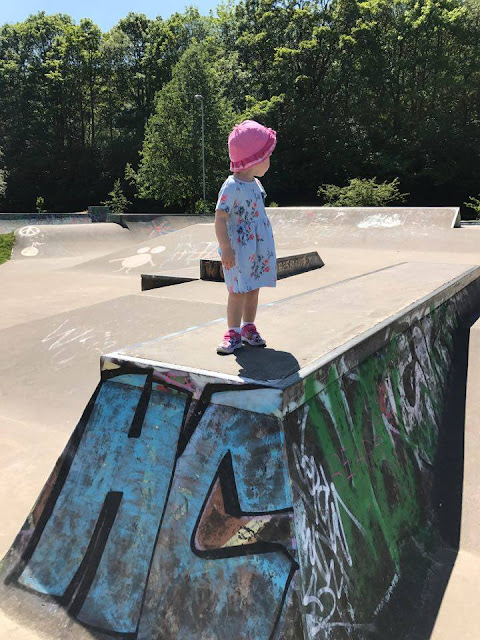 We did finally make it to the playground after here and Lily was really impressed with it. In fact so was I. It had so much. Firstly Lily had to try out the swings. Its her favourite thing to do at the park. Then after that she decided to walk around and see what else there was. Lately Lily has had a real big thing for wanting to do all the things she see's the older children do. She was really disappointed when I told her she couldn't go on the big climbing frame. I don't blame her. It does look amazing fun. But she is just too small yet. Luckily we found a smaller one behind it and she was quite happy to play on that. The smaller one was perfect for her age range and not something you often see at parks. She could easily climb up it herself and then go down the slide. 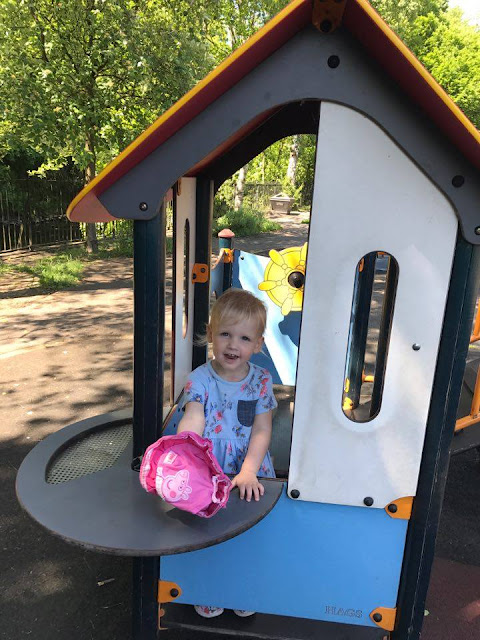 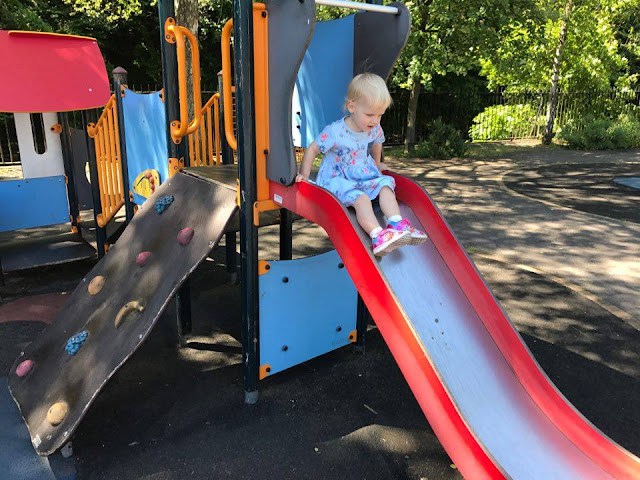 There was lots of other cool things to see at the park. Including a water pump which lead water into different metal pools, and a very cool looking pirate ship that actually rocked. I swear i'm not only going to talk about how good the park was in this post and tell you about the rest of Hebden Bridge. But it was well worth the £8 train fair just to come to this park. Lily really enjoyed it. 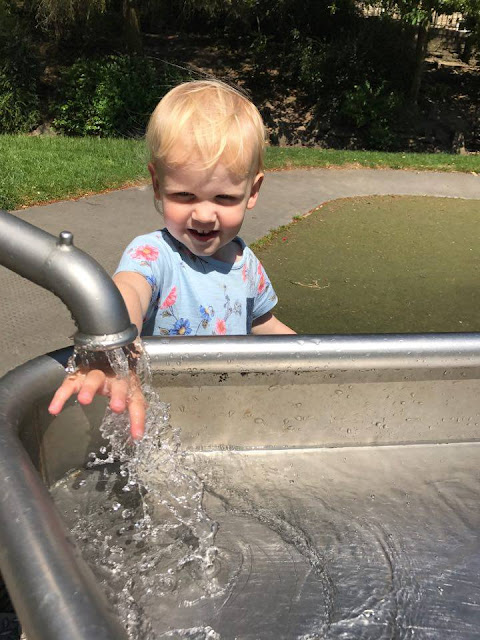 So now my only problem is that I need to get Lily to leave this amazing park. Asking wasn't working, telling wasn't working, and i'm not one for dragging my child away from the park. So looks like it will have to be bribery haha. The words "Lily would you like an Ice Cream" worked really well. As luck would have it, right next to the park is a lovely little cafe that sells ice cream. Also not just boring ice cream, but there was a choice of at least 15 flavours and they were massive! I got Lily a vanilla one with blueberry sauce and I had a forest fruits flavoured one. The ice cream was so big I ended up having to get a little tub for Lily's ice cream as it was dripping way to much. 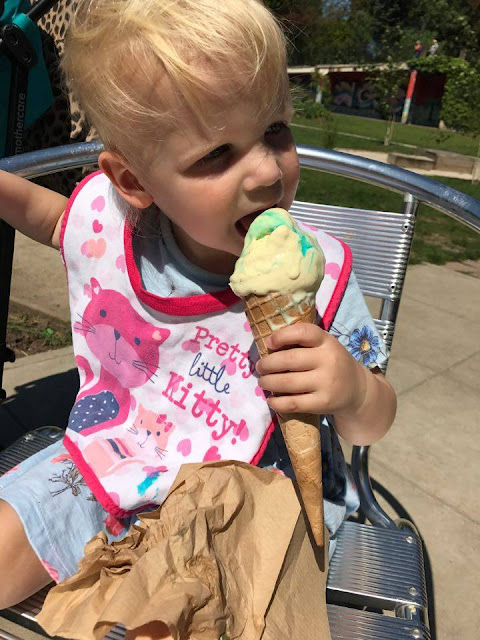 After Lily had finished this, we went for a walk to the shops. Hebden bridge has a really nice street of shops that I can only describe as Quirky and full of character. Its a really nice place to shop for something a little different. For example there is a really cool comic book store, lots of organic type food shops and a really cute toy shop which we happened to find Lottie Dolls inside. I also couldn't resist going into the soap shop which had a very enticing display of soap cakes in the window. One thing I have to say about this place also, is how friendly the people are. So many of the shop owners were really chatty and the soap lady gave Lily a balloon and the comic store gave her a free super hero comic. Lily at one point lost her balloon and a man actually jumped out of his car and ran and saved it for her. Today has left me feeling so happy with knowing that there are still many nice people in this world. 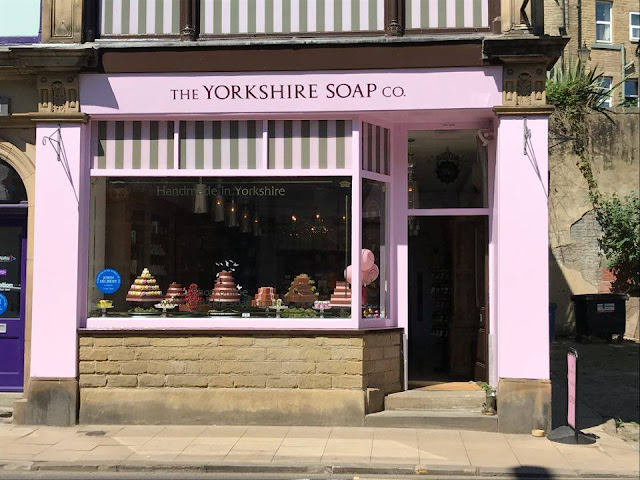 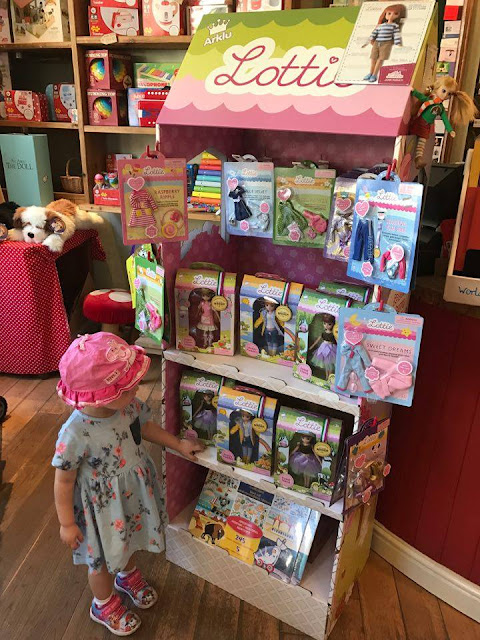 After shopping we headed to where we could see lots of ducks on a stream. To get there we had to go over a really old bridge. One thing that is lovely about Hebden is that is still has some old structures and buildings. Here is Lily posing with the sign that tells you about the bridge and then having a good run over it. She was also counting the cobbles as she walked on them. 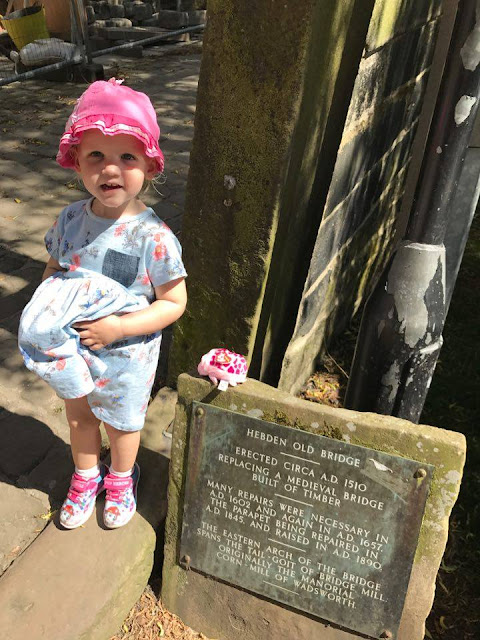 Next to the bridge is the little steam with the ducks. First we fed the ducks, though mostly fed the geese as the ducks weren't very interested. After feeding the ducks some children started to come and dip there feet in the water. As I was saying earlier about Lily wanting to do what all the big kids do, she obviously wanted to give it a try. So off came the shoes and socks and she dangled her feet in the water. This is really not like Lily at all and usually she is hating being in water, but today was different and she wanted to copy the bigger girls and get in the water. So I decided to tuck her dress into her knickers and let her have a paddle. She loved it but wanted to walk in deeper to the other side where the pebbles were. I told her she couldn't as again, she was to small to go across on her own. 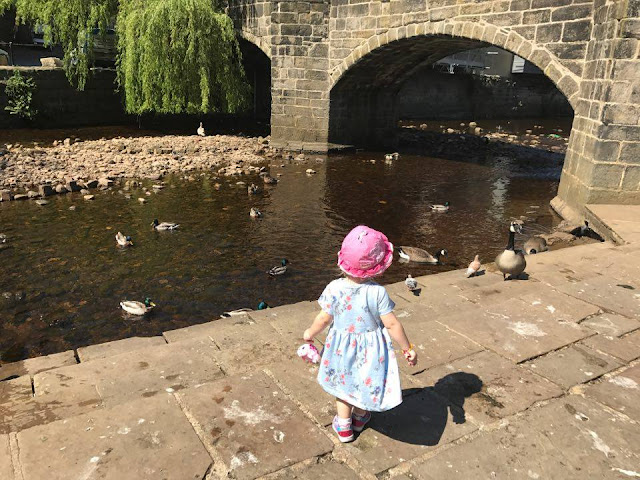 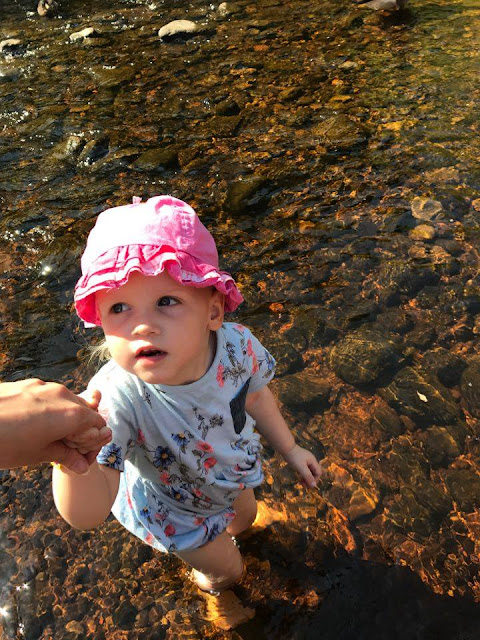 We decided that it was time to start walking back, but not before going to see the barges on the canal. There are so many of them along the canal and Lily had never seen one before. She thought they were great. We were lucky because the time we got to the locks, there was a barge coming and they opened up the gates to let it through. I have always enjoyed watching this happen and Lily did to. She was waving to the people in the barge as it passed. It was really great to teach Lily how the barge locks worked. Especially as we are having a STEM month this month and the locks are a great bit of engineering. 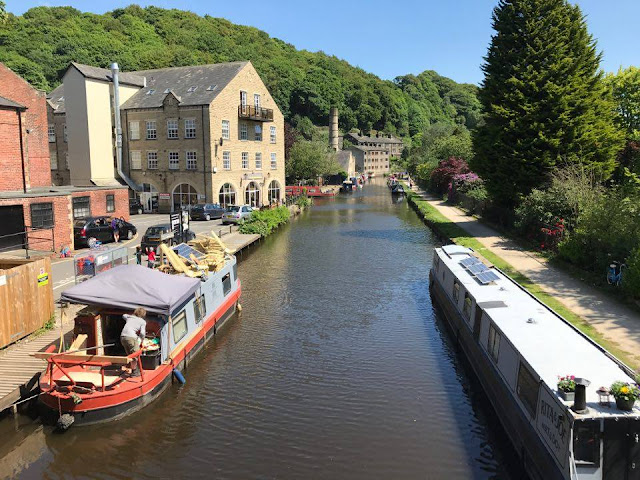 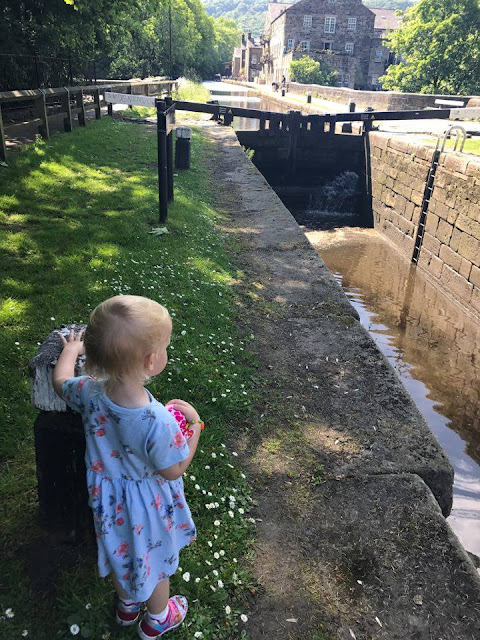 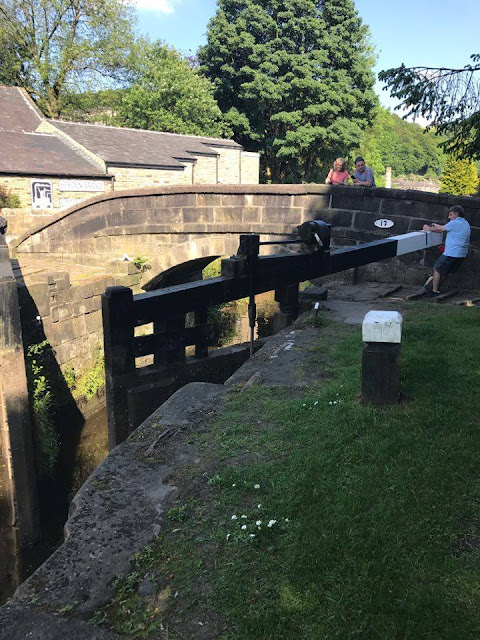 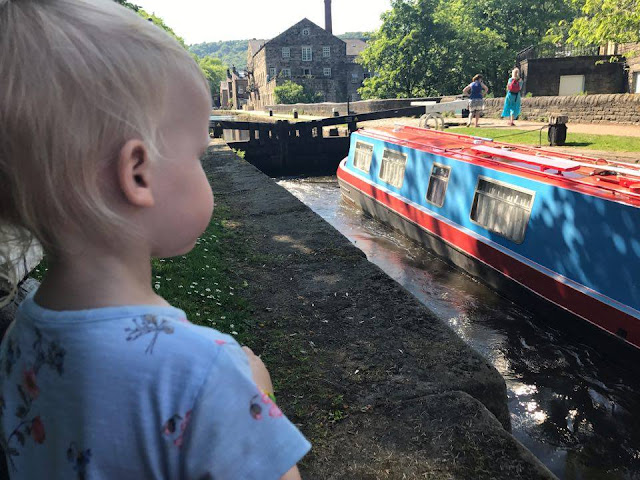 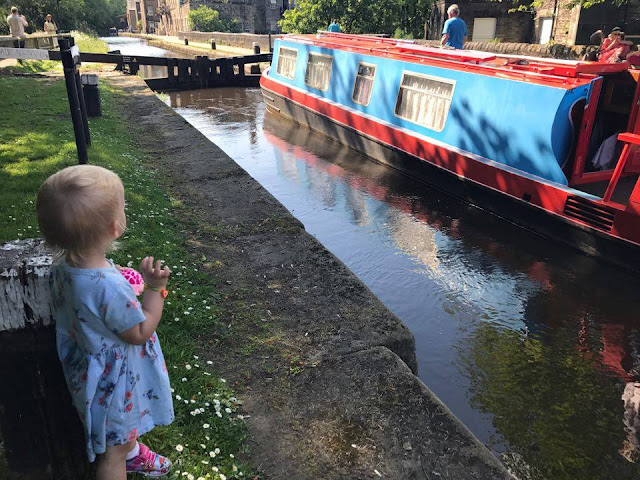 We had 10 minutes spare so I let Lily have one last go on the swings before we got on a train home. Before I left this morning I couldn't quite remember what was at Hebden Bridge. I wondered if there would be enough for Lily to do. Im so glad I took the risk as there was so much to do and Lily loved it. There was also lots we hadden't done today that we could of done. Like visit the lovely cafe's and eat in the nice restaurants. It is definetly somewhere we would visit for another day out.

Have you ever visited Hebden Bridge? If you are local do you think you would go?

Posted by LilysLittleLearners at 22:06