Monthly Book Roundup - What We have been reading in April

Its time for my monthly book round up again. Each month I write about new books that I have introduced to Lily at bedtime and what we think of them. We always read around 3-4 books a night and most nights we end up reading the same ones with a few odd ones read in between. I find reading the same books helps Lily relax and she does grow fond of the stories each month and gets excited when I get them out to read each night.

You can read all our other monthly roundups here.

This month I wanted to give a little bit of Spring/Easter theme to the stories I read. I did leave it a little late and when I headed to The Works to buy some new books a lot of the Easter themed stories were gone. I managed to find one which was about an egg though, and the rest were mostly spring related.

Here is this months choice - 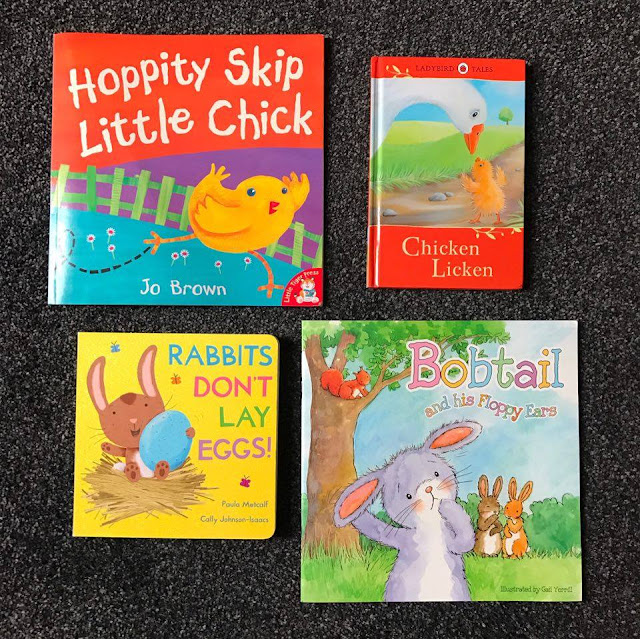 1. Hoppity Skip, Little Chick by Jo Brown
Lily did seem to enjoy this story but for me I felt it did lack a little excitement. It was about a chick that was bored of sitting in the nest and so decided to go out and try and make friends with the other animals. The other animals showed the chick more things it could do like hop, skip and roll. The illustrations were really colourful though and I think this is what attracted Lily more to the story. This was one I picked up from The Works and this was my least favourite from the bunch.

2. Chicken Licken, Ladybird Tales - Retold by Vera Southgate
This was my favourite and most memorable story when I was a child. I do remember loving reading it over and over and also the story managed to stick in my head all these years knowing some of the character names. It was first published in 1964 and then republished as a Ladybird Tale in 1969. The story is all about a little bird called Chicken Licken who after having an acorn fall on his head, thinks the sky is falling down. He must tell the king! On the way he meets new friends that all want to join him. Their names all rhyme like Chicken Licken's does. You have Henny Penny, Cocky Locky, Ducky Lucky, Drakey Lakey, Goosey Loosy, and Turkey Lurkey. These names get repeated in a row each time a new bird is introduced and so you end up saying them over and over again. It is really repetitive which is great for engaging children's interest in a story as its easier for them to follow. The end of the story isn't such a happy ending though and one that could be upsetting for children, though never seemed to bother me and didn't bother Lily. In the end they meet Foxy Loxy. They think he is their friend but he isn't and he leads them back to his family who all eat them. So really this is a horrible ending to a child's story and maybe not everyones cup of tea. I was really lucky and won this copy of the book signed especially to Lily from the illustrator. This will definetly be one to keep hold of. There are different versions of this story, but this one that is a Ladybird Tale is the best. You can find it online at places like amazon.

3. Rabbits Don't Lay Eggs - Paula Metcalf
I enjoyed this story. I found it really entertaining and comical and Lily also enjoyed it to. The story is about a Rabbit who is really bored and so decides it wants to go live on the farm. When she gets there she gets told she can only stay on the farm if she gets a job. She agree's to work but then its finding her a job. They try lots and struggle to find the right one. She even tries to lay an egg. Which comes out the right shape.... but its not an egg. Haha, Which at this point Lily loves shouting out "its done a poo" and laughing. One day the rabbit decides to go and collect all the vegatables from the fields to give to the animals on the farm. Brilliant. She has a job. And whats even better is that they think she has layed them. Its a great story with laughs and a wonderful storyline. Its a hardboard book which is nice for younger children to also be able to see the wonderful illustrations that are in it. This was one of the books I picked up from The Works.

4. Bobtail and his Fluffy Ears - North Parade Publishing
I think I fell in love with this story more than Lily did. It was my favourite to read to Lily and luckily she enjoyed it to which meant I could read it to her lots. The story is really sweet and has such a loveable storyline to it. Bobtail is a rabbit with floppy ears. All the other bunnies ears stick up and so they make fun of him and tell him that he can't be a rabbit. So he goes off in search to figure out what he might be. Maybe a mouse? But the mouse says that his tail is to nice to be a mouses tail. Maybe a hedgehog? But the Hedgehog tells him that his fur is to lovely and soft for him to be a hedgehog. Bobtail then meets a squirrel, who's long bushy tail tickles him under his nose and makes him sneeze. As he sneezes his ears shoot up! Now Bobtail had rabbit ears, and the nicest tail and fur. He was a lovely rabbit and no longer got picked on. I find a resemblance to the Ugly Duckling with this and its a really nice story to show that we are all different. Its also good for children to learn that they do grow up and change in time. I would really recommend this story as it was a lovely one to read. I got this one from The Works but I have also found this on Amazon.

Which of these stories do you like the sound of the best?

Posted by LilysLittleLearners at 21:30