Lalaloopsy is such a cute character and one that Lily and I both love. She is always super colourful and super smiley and has the cutest button eyes. She is a big favourite in this house.

Lalaloopsy got in contact and asked if we would like to give the Glitter Hair Dough Doll a try and knowing how much Lily also loves play dough I couldn't say no to such an opportunity.

The Lalaloopsy arrived and was really nicely displayed in her colourful box. I think that the way they have always been displayed in the boxes have been one thing that has always attracted me to them when I see them on the toy shelves.

The idea of this Lalaloopsy is that you can make her hair grow using the dough and then style it and cut it.

She comes comes with a base to sit her on, 3 tubs of dough in Pink, Yellow and a Bluey Green colour. Some scissors, hair clips and different hair inserts to make different hair shapes. 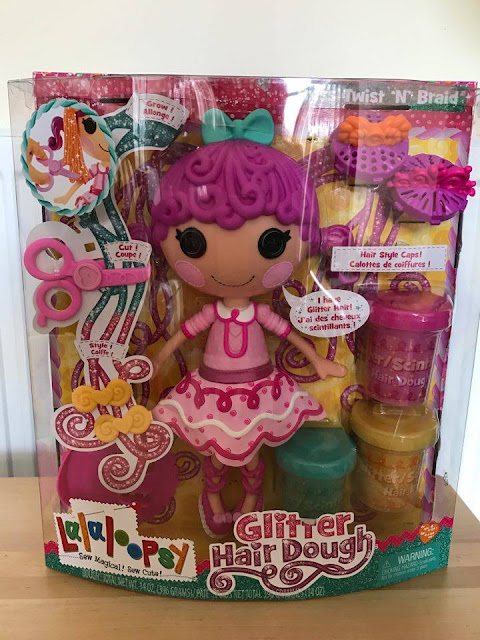 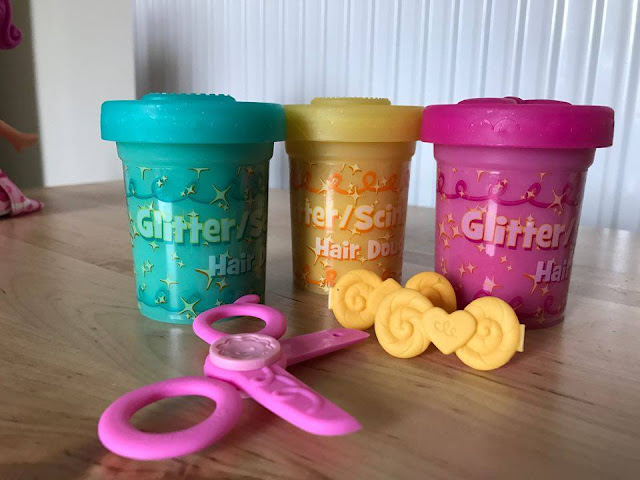 The doll design itself is so cute. I love all the pink on her and her cute bows that sit on the top of her head. Her dress is super cute and she has little underwear on underneath it to. I think the cutest part of her though has to be her pink shoes that wind up her legs. Which are shown off nicely when she is sat on her stand. She slots into the stand really easily and then can sit without falling over so then you can do her hair. 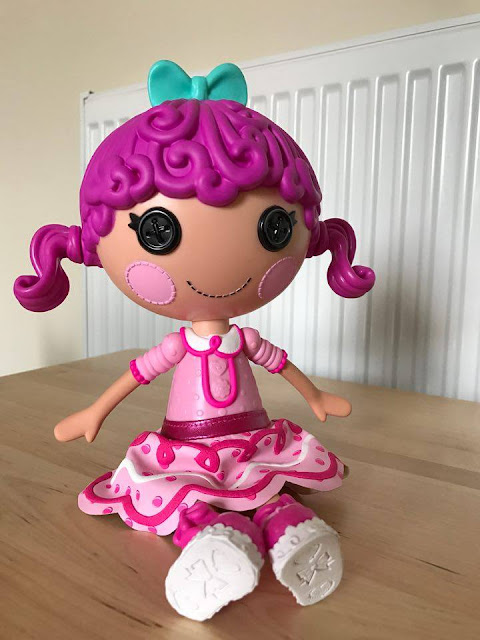 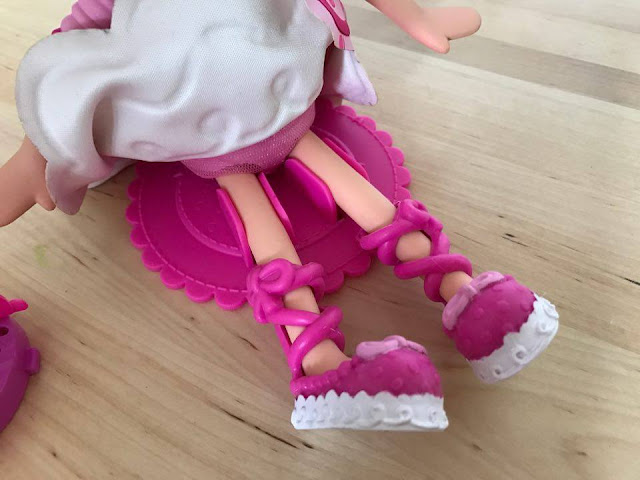 So now that I have admired the doll and fallen in love with her. Its time to get creative with the dough. Luckily there was instructions that weren't hard to follow.

You first need to choose a colour of dough, we chose the blue to start with. You then open the top of her head up by twisting and pulling the bow. You choose which bow with you would like to use as each one makes the dough hair come out in different ways. We started with the green bow.

If you look inside you will see there is a white base, when you wind her pigtail on the right side (her right) you will see that white base move up and down. This is going to acting as a plunger type thing to push out the dough. You need to make sure this is wound right down before you place in your dough.

So you then put in the dough. How much I wasn't sure about as the instructions didn't specify so I just put in as much as I could. Which was nearly a full tubs worth. 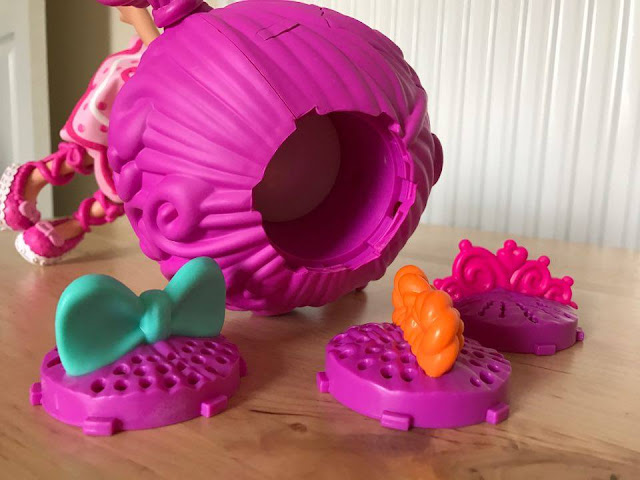 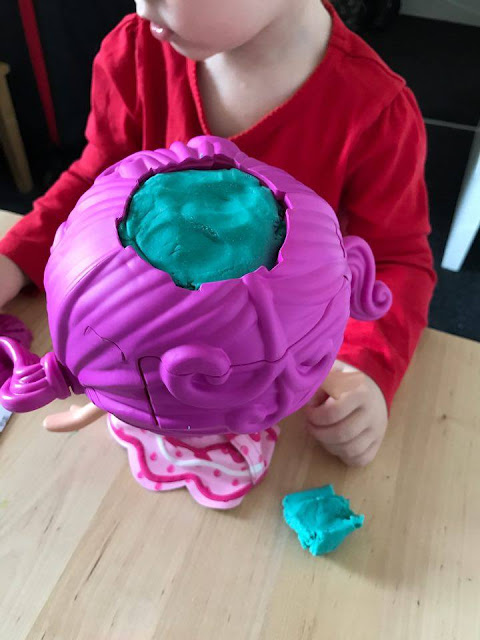 You then place the bow back on the head by slotting it in and a giving it a slight turn. You are now all ready to start creating some hair!

So now you need to start turning that pigtail again. Very slowly winding it and you should start to see the hair appear. If you were doing it to fast it started to click and you needed to slow down. There were times that it felt like it was quite easy to turn the pigtail at the side and then there were times it felt tricky and had to use a little strength. This meant sometimes Lily could just about do it and sometimes I needed to help her. Lily is only 2 and so perhaps a child a few years older wouldn't find this a problem.

We turned the pigtail until I felt like there wasn't anymore hair to come out and maybe we had used up all our dough. This was where I encouraged Lily to try and style the hair and cut it. She doesn't quite know how to hold scissors yet. But gave cutting the hair a good try and really enjoyed this part of it. 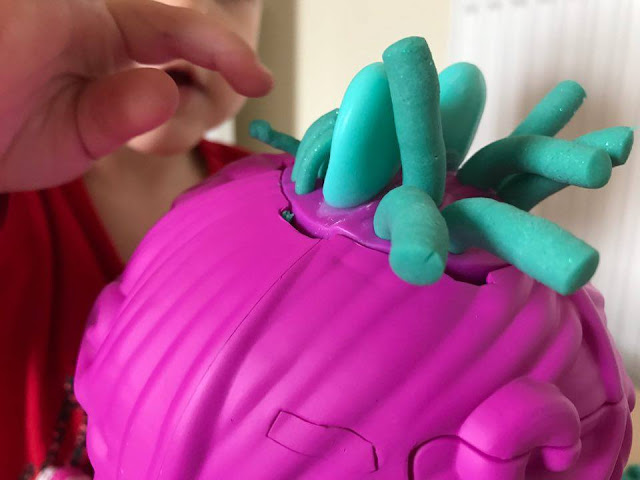 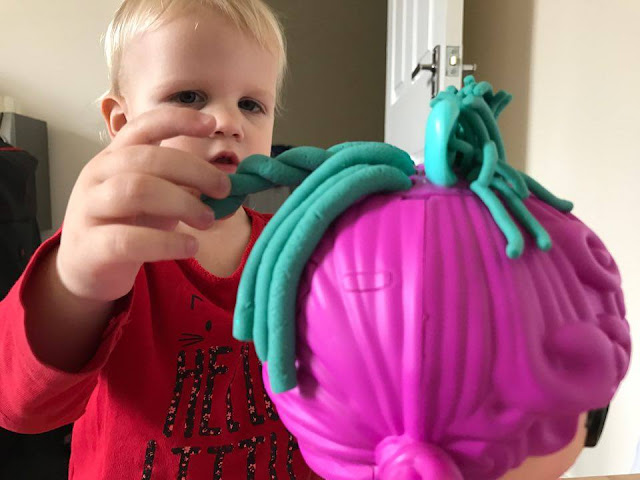 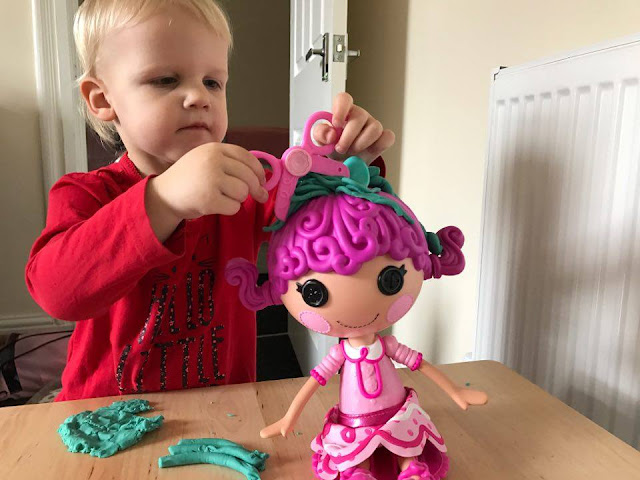 You can now open up the back of Lalaloopsy's head. (Yes the poor girl seems to have to put up with a lot of open head brain surgery) Its really easily opened just by sliding it across.

Inside you will see a latch to open another little door and this took me a few attempts to figure how to open it. You flip up the latch and the door can be pulled open. Inside you can see where the white plunger is pushing the play dough up. If you wind it down using her pigtail again, you can now add more dough if you would like. This could be to make her hair longer or come out all rainbow like. 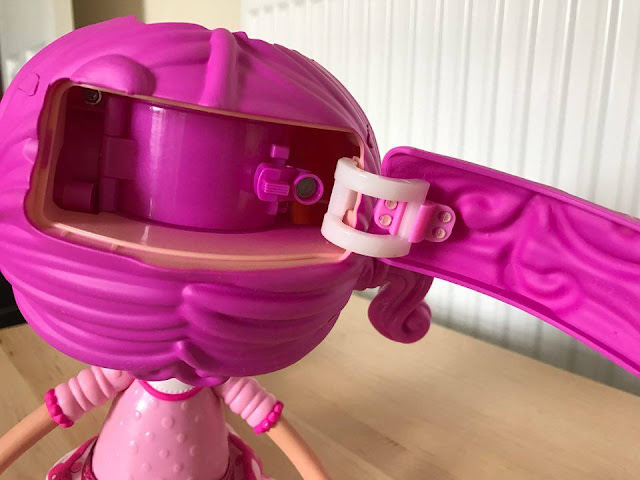 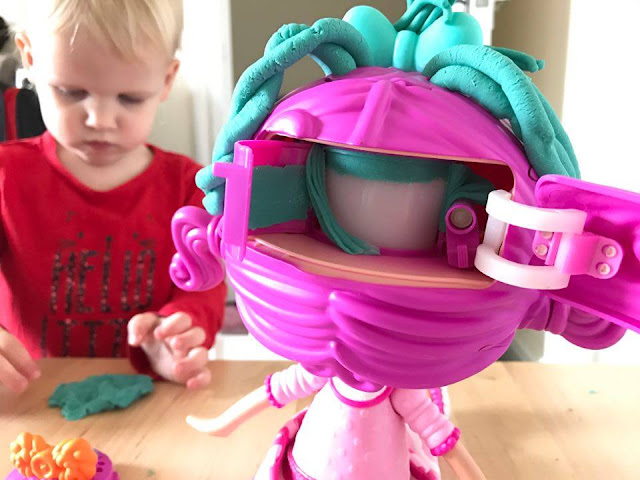 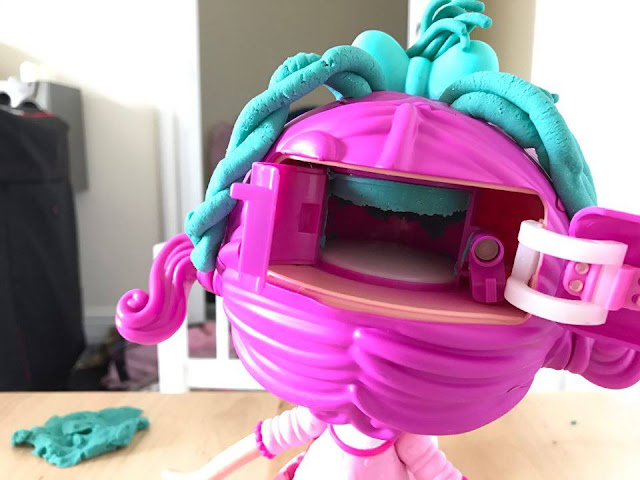 We decided that we would change colours after Lily had chopped all her hair off and so we decided to do some pink hair this time. As I pulled her bow out, with it came loads of play dough. We hadden't actually used it all up like I thought I had and probably could of made her hair way longer.

I got rid of any excess green dough and then chose the pink bow to get my hair shape. This time I didn't put as much dough in. So didn't get as much hair, but it was enough for Lily to be able to snip away at it which she enjoyed. 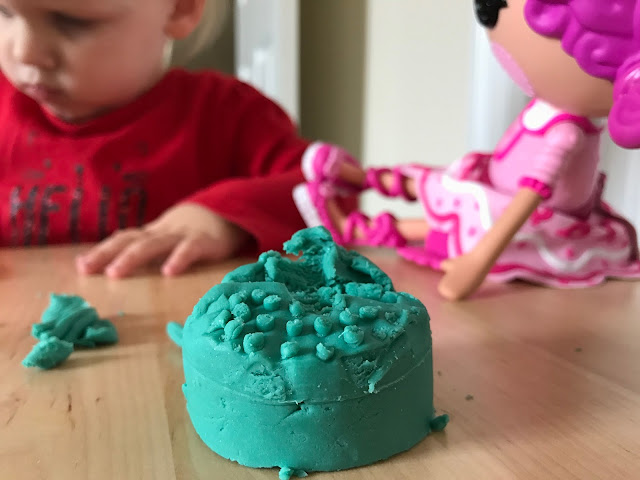 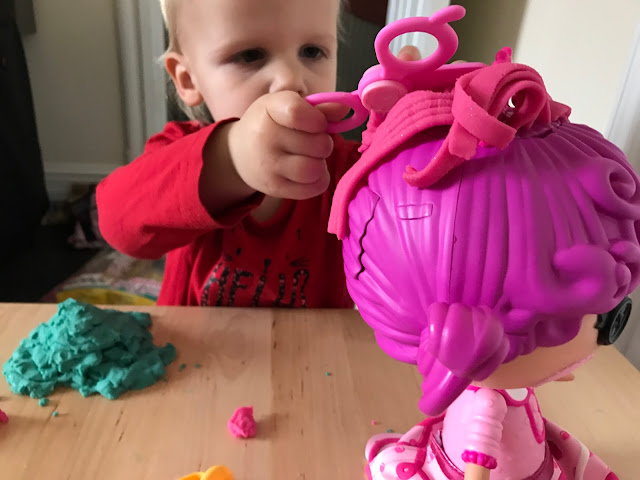 The dolls head itself was actually fairly easy to clean the insides of. The plunger comes fully out so you can get that clean and get underneath it clean. The only thing I did find difficult to clean was the pink bow insert as the holes were so tiny and all the dough stuck into them.

I can tell Lily is going to really enjoy playing with this doll. A few hours after we put it away she asked for it out again, though it was to near bedtime so she is having to wait until tomorrow to have another go.

I think as she gets older she is going to be able to play with it more. I just hope that either the dough lasts or that we can buy replacement dough.

You can buy this Lalaloopsy from most toy stores and it retails at £29.99.

Also if you are a big fan of Lalaloopsy you can now watch there very own TV show on Netflix. We have been tuning in and its great and Lily is really enjoying watching it.

Have you seen the show?

Do you have someone in the family who would love this doll?
Posted by LilysLittleLearners at 23:11