Lily is currently a Nuby Tester and so we were sent lots of new products to test out and report back to you about what we though. Mostly there was food related products which is great as they always come in handy.

We were sent
The first thing we tried was the Soother with Dummy clip. Lily has used Nuby Soothers before and because the dummy's are very similar shape to the bottle teats, she gets on with them really well. I love the pictures and sayings that come on the dummy's. This one had a cute little panda face on it. The strap on the dummy clip looks really nice and is like a ribbon. But the cutest part has to be the elephant on the end of the clip. The clip is really easy to get on and off. Maybe a little to easy as Lily can rip it off. But she is nearly 2 years old and is now very strong and clever. The clip is also really easy to attach to any Nuby dummy you like with a simple velcro fastening. 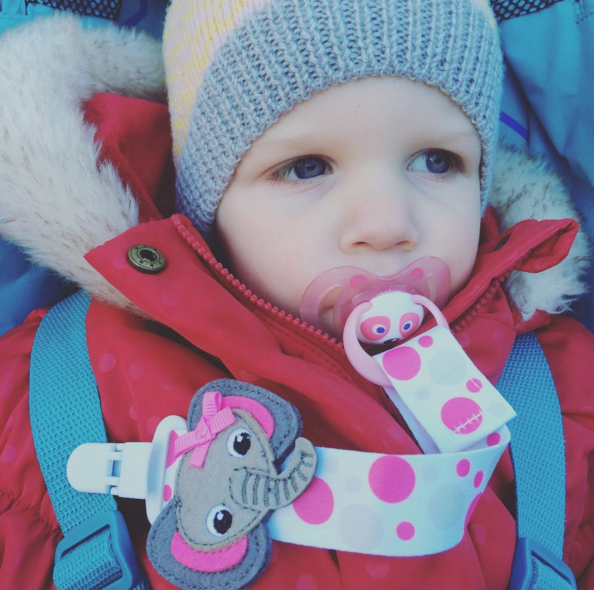 The dummy and clip retails at £4.49 and comes in a range of designs.

It was then dinner time and so the perfect time to test out the Bib and Section plate. Lily had quite a messy dinner in store of lasagne and so this is definetly a time when a cover all bib is needed. Lily was also having potatoes with her lasagne so it was perfect that the plate was sectioned into 2. One side for her lasagne and one for her potatoes. I must admit on first looking at the plate I thought to myself, "that doesn't look like it will hold much food" but actually quite a lot of food fits in it and its deeper than it looks. Lily has used it on many times and actually its currently dinner time right now and she using it with her veggies in one side and 2 fish fingers and 2 potatoes in the other side.
The plate also is attached to a matt that grips to your surfaces like your high chair tray. Lily has just stopped using her highchair and so is currently sat at her plastic drawing table until we get a new one. Unfortunately the matt doesn't grip to well to the plastic table but that may be because the table is a rough feeling. I think it would work very well on a plastic high chair tray. 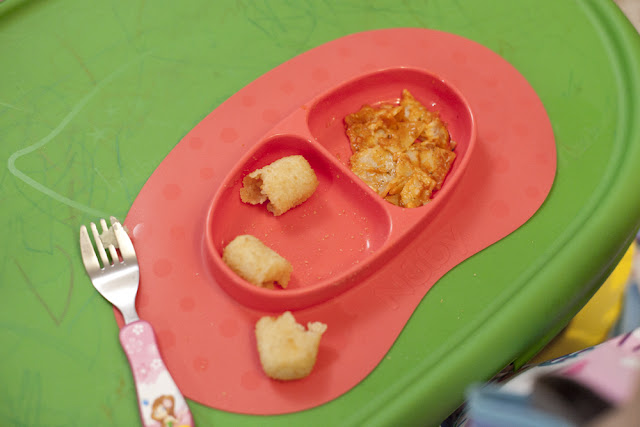 The bib fit brilliantly and covered up all her arms and her chest. It also came quite high up so then food didn't slip down the front of it. It was easy to attach with velcro at the back but that also means its easy for Lily to remove when she is having one of her days when she doesn't want to wear a bib. In cases like this I do prefer a press stud. The design was really cute and had a picture of a cat on the front. Lily is really liking cats at the moment so she was really happy with the design. The bib also comes with a dribble bib which actually I sometimes put under a bib like this to double ensure nothing goes on her nice clothes. So I think its great that a dribble bib is included in the set. The next test was how easy does the bib clean up? EASY! In the past I have found I have wiped some with a wetwipe and it was marked already, but with this bib not a mark was left behind making it look good as new. 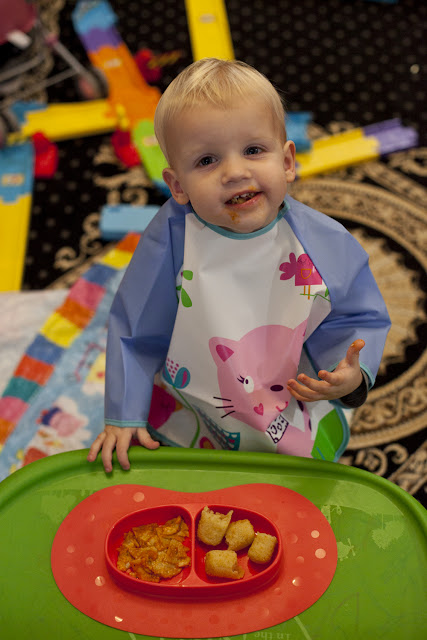 The plate retails at £7.99 and comes in a range of colours.

Our next thing we tried was the travel cutlery set. This is something that i've actually been meaning to get Lily for a while. The amount of times we go out to eat and I have forgot to pack her folk and spoons. This little set is perfect for keeping in your baby bag at all times so then you always have it with you. It comes in a handy little tub that easily fits into the pockets of my baby bag. This also keeps the spoon and folk nice and clean in your bag to. The cutlery is made out of plastic. It does remind me of something you would use at a picnic. We decided to eat out at Morrisons cafe across the road and I ordered Lily fish fingers, mash and peas. Lily was really excited to use the spoon and folk and wanted them right away. She gave eating her peas a good go and the spoon was a great size for that. Then she tried the folk to eat the fish fingers. We did find that the folk was so thick that it was hard to stab the fish fingers and so instead it just broke them into pieces. She ended up using her hands in the end. One more thing that is great about the travel set is that it comes with 2 spoons and 2 folks. Lily dropped one onto the floor and so it was great to be able to give her another straight away while I cleaned the first. Also perfect if you have 2 little kiddies out for dinner with you. Overall Im happy at the set and will be using them again and again. 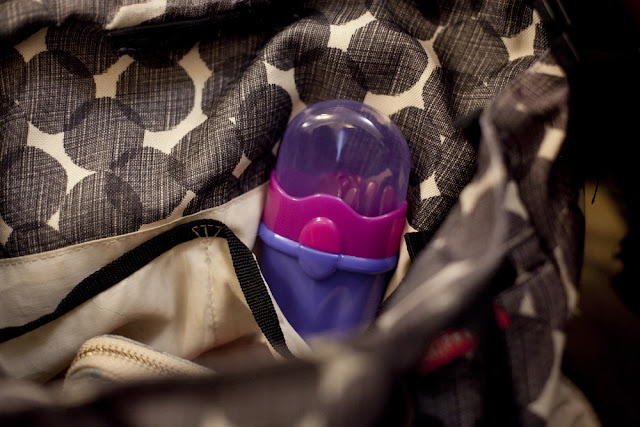 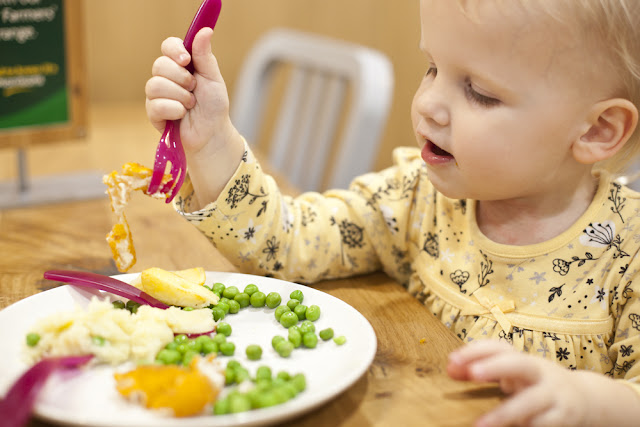 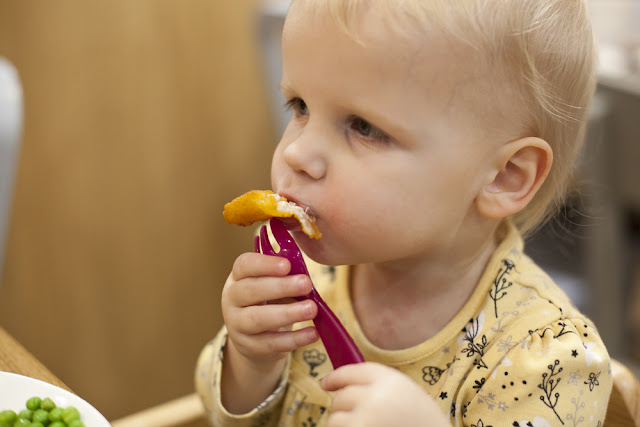 The travel set retails at £2.49 and also comes in blue and green.

Last but not least its the insulted cool sipper beaker. Lily is really fussy with what she will drink from and it did take a few tries to convince her to have it. But the other day at soft play we had a revelation and I think she was so thirsty she just decided she really needed a drink. At first she tipped the cup and said to me "doesn't work". This is because she is used to free flow cups and this one is a no spill cup. So I said to her she was to suck like its a straw and she understood that and managed to use it. She has happily used it since then and so its nice to have found another drinking cup for her to drink from. I have also been wanting to give her a non spill cup at bedtime so then she can have water in the night. This cup is perfect for that. The spout that is on the beaker is really nice and soft and so doesn't effect her teeth when drinking. Though I did find her chewing on it and had to tell her to stop that.
The coolest thing about this cup is how it keeps drinks cool but also your little ones hands don't get cold drinking it. Lily hates holding something cold and does complain usually and so as this cup has a double wall it means your child isn't holding the part where the liquid is. The cup also holds quite a lot of liquid at 9oz. I hope to get a lot of use out of this cup. 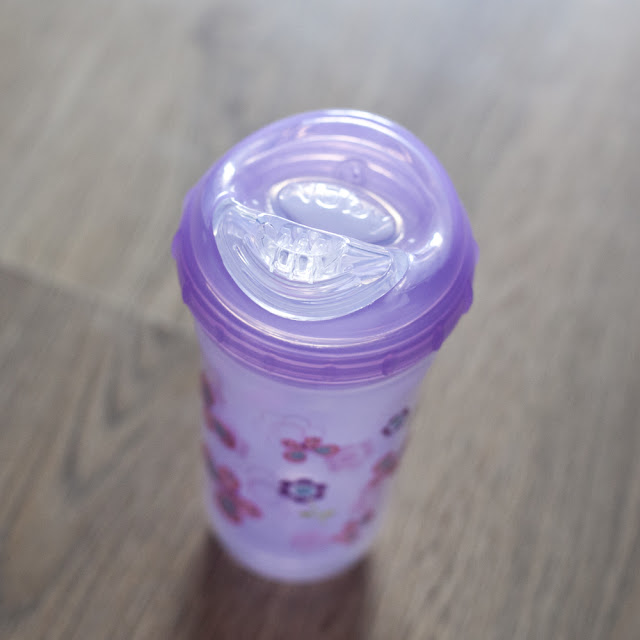 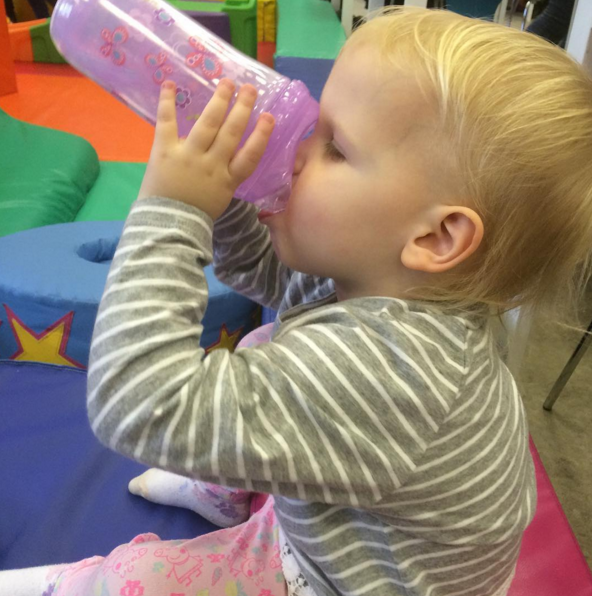 The Insulted Cool Sipper Beaker retails at £4.99 and comes in a range of colours.

Over all its such a good and useful bundle and I definitely would choose Nuby for my future dining products.

Do you love Nuby? Your in luck as I have an AMAZING weaning bundle to give away to one lucky winner. It has everything you would need to get started weaning.
For your chance to win, Enter on the Gleam app below. 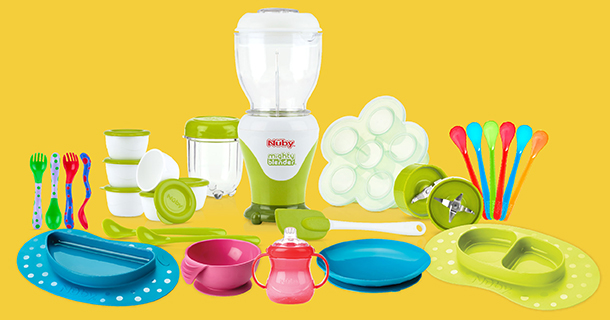 Win a Nuby Weaning Bundle
Posted by LilysLittleLearners at 18:30