Our Visit To Monkey World - Plus Giveaway


Last week while on Holiday in Weymouth, Dorset. We went to Monkey World for the day. Monkey World has always been a place close to my heart and Ive been visiting ever since I was a little girl when my parents would take me.

Monkey world is a ape rescue centre that was first set up by Jim Cronin in 1987. His aim was to rescue chimps that were being used on spanish beaches as photographer props and provide them with a stable real home. Little did he know at the time that his plans would be successful and years later he would be taking in monkeys of all types into the park.

Monkey world now has 65 acres of land which is now home to 250 primates. The monkeys all live in an environment that is just like there homes would be in the wild. Most of the primates at the park have all been rescued either from the beaches, labs, or the illegal pet trade. A lot all have very sad stories and Monkey World works to rehabilitate and give the monkey the best natural life that is possible for them. There are a few primates born at monkey world but monkey world have a birth control programme to keep the numbers of monkeys born to a minimum leaving space for more to be rescued.

One of the reasons I always visit the park is that they reply on visitors coming to be able support the funding of the park and the continued work to rescue more primates. Over the years of visiting I've seen new enclosures built and new monkeys arrive and so its great to know that with support monkey world can save more monkey's lives.

So let me tell you a little about our visit there.

Our first stop was to visit the chimps they have at the park. Over the years I've grown to know some of the chimps there and can name a few without even looking them up. You have Paddy, who is one of the biggest with a silver back and he is the leader of a group at monkey world. He is always easy to spot when you know who you are looking for. Then you have Butch who is the leader of another group called the bachelor group. Both of these monkeys were used as photographer props. A lot of the chimps were rescued from being a prop and people don't think much of it to begin with as its seems that the monkeys are happily posing for a photograph but most the time what you don't see is the ill treatment the chimps get and are often kept in terrible living conditions and cages. Its always so nice to see the chimps now though in monkey world. Acting like a normal chimp and living in such nice surroundings.
I must mention one of my favourite chimps. Trudy. Originally Alice. She was rescued from a circus and when she was first brought to monkey world she would walk around cuddling a big bundle of hay. I find it hard to make out which chimp she is now when I look at the group. But that just shows how rehabilitated she now is. She is part of Hananya's group.

Then we have Sally, who also holds a special place in my heart. She is adoptive mum to many baby chimps who are either born at monkey world and rejected by the birth mother or arrive and need looking after. Sally has a heart of gold and takes them all in as if they were her own children.

On the day of the visit a lot of the chimps were relaxing in the sun, some wrapped in blankets and a few of them could be seen with ice lollies that the park would have made up for them out of fruit.

Here are a few of the photographs of the chimps I took at monkey world. 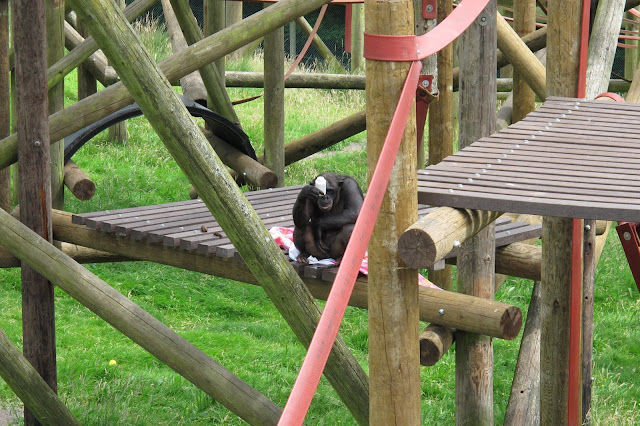 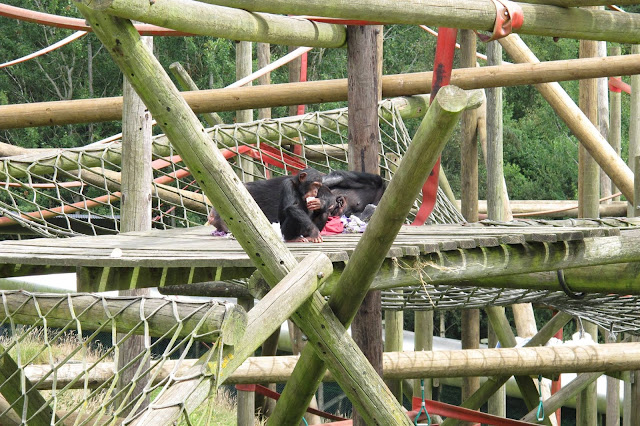 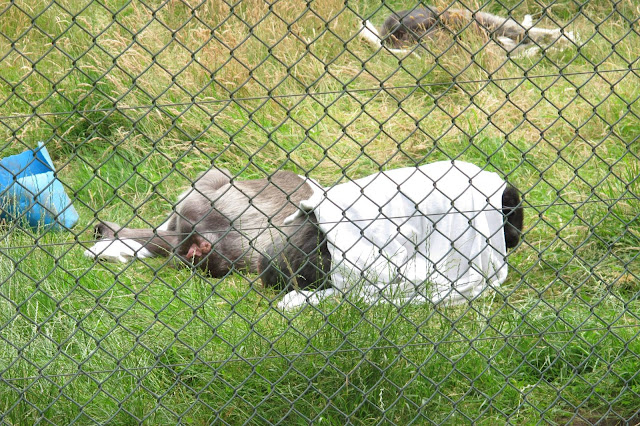 (Sally wrapped in a blanket)

As I said above, its not just Chimps at the park. The park is home to a lot more different species. There are Gibbons, Capuchin Monkeys, Spider Monkeys, Wooly Monkeys, and many more. There are also Ring-Tailed Lemurs and they have a open enclosure that you can walk around.

All the little tiny monkeys that are at monkey world have lots of different enclosures that all lead to one and other with little bridged tunnels that go across the paths that we walk along and you can see the monkeys all running along. A lot of the tiny monkeys were mostly rescued from either labs or the pet trade. A lot of people think they are great as pets but in reality they need a lot of space and shouldn't be kept in a small cage.

There are definetly a few characters when it comes to these monkeys. There are two at the park that just seem to love the attention. One just sits in the window and loves moving along the enclosure following the visitors. He happily let Lily put her hand on the glass where his foot was. The other will stick its tongue out at you. (which apparently is a sign that he likes you) 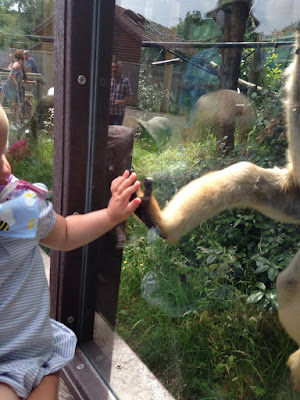 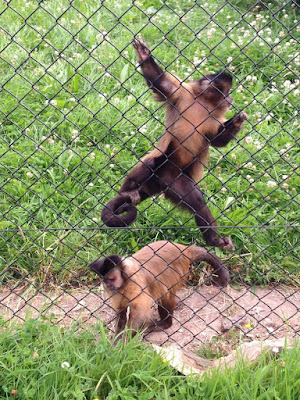 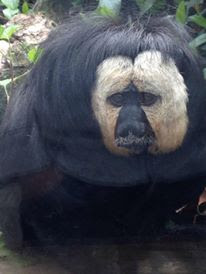 One of my favourite parts of monkey world is the Ring-Tailed Lemurs who have a open enclosure that we can walk around. The enclosure is managed by staff and we aren't aloud to touch the lemurs but its great to get up close with these animals and see them. I viewed one of the talks about the lemurs while we was there and its great to know that its the women lemurs that are the dominant ones. As we watched the lemurs get fed some frozen bananas they kept jumping onto the fences close by us. 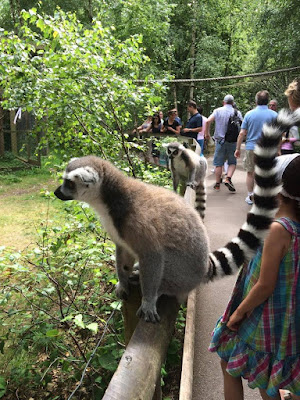 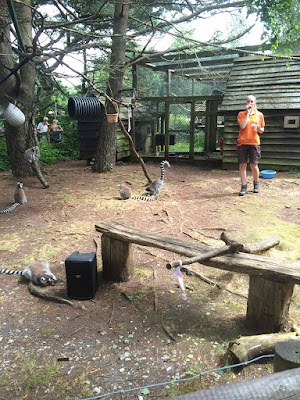 Then last but not least we went to see who I had been most looking forward to seeing. The Orang-utans. The group I was most excited to see was Gordon's group. Seeing Gordon is special to me as I've been visiting monkey world so much that I've seen him grow up. He was born at the park in 1997 and I remember seeing him when he was a tiny baby ape that very year. His mother is Amy and she was one of the first Orang-utans to come to Monkey World. Gordon is now 18 years old which means I was around 11 when I first saw him and wow has he grown! He was quite happy to show himself off at the park too as he walked across the ropes and a few times did it with no hands! Very impressive. 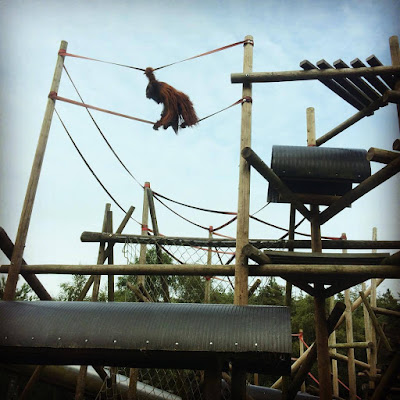 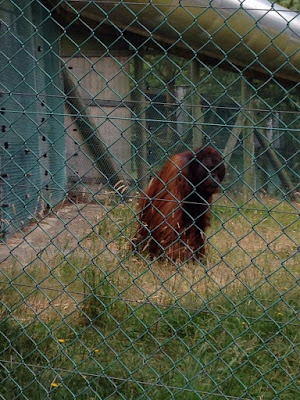 I had to grab one last photograph while at the park and that was of the memorial of Jim Cronin who set up the park and Charlie who was a very popular chimp and loved very much by Jim and the other staff at monkey world. Both sadly have passed away but there is this beautiful memorial placed here at monkey world and they both will never be forgotten. 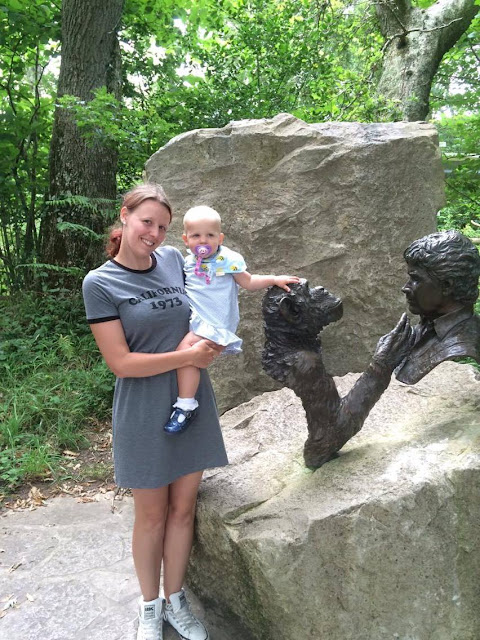 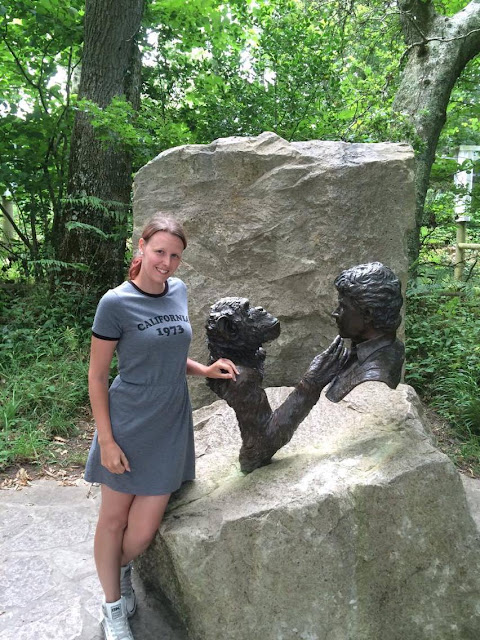 Overall the day at monkey world is a really great day out. As well as getting to see the brilliant animals and getting to listen to the fabulous talks all about them there is also a amazing adventure park right at the end that your own little monkeys can go and climb on.

I really hope that if you haven't been before, then you consider taking a trip there. Not only is it worth it for a fun day out, but you will also be helping support monkey world and all the great things that it does for the monkeys.

The park is only £11.75 for a Adult ticket and £7.50 for a child aged 3-15 years old. There are also family tickets available.
The park is open every day except christmas day from 10am - 5pm, extending to 6pm in July and August.

There are also other ways you can help Monkey World. One is the adopt a monkey scheme. No this doesn't mean you can take a monkey home with you. That defeats the point. But you get to choose a monkey and get a certificate saying you have adopted them along with a photograph. You also get sent the newsletter magazine sent out 3 times and year and FREE admission to the park for the year. For Adults it costs £35 and for a Child £25. The money goes 100% into a fund that is solely used for rescue and rehabilitation of the primates. This is something that I will be doing soon.

Then there is also your own fundraising that you can do, and also the Jim Cronin Memorial Fund which you can read more about here.

As I am all for helping Monkey World, I took a trip to the gift shop where the money made in there also goes to help the monkeys and I bought this little goodie bag of items and brought it home especially for my readers. I would love you to help me spread the world of monkey world and enter for a chance to win these goodies. 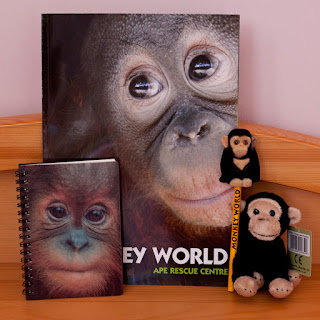 Please enter on the Gleam app below. Win a Monkey World Goodie Bag
Posted by LilysLittleLearners at 10:38