Breastfeeding - The Start, The journey, The End.

Its now been over 2 weeks since I finally finished breastfeeding Lily. Part of me is relieved and part of me is a little sad.

I've loved breastfeeding Lily and she took to it so well and fed for the first 40 minutes of being born with no problems. I was very lucky and I found it quite easy, though still had the same issues as most with the aching breasts and sore nipples. But I found it such a nice experience and I really loved the bond that you can get with it. 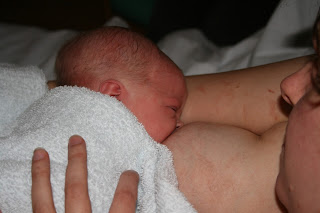 Breastfeeding is the best thing I've ever done and I've loved every minute of it. Even when I had tired nights of being up feeding her, I would still look down at her and think awww. She would always look so content when I was feeding her. For me it used to feel really nice that I was providing for her by giving her part of my body and also it was nice knowing the comfort she was getting from me. 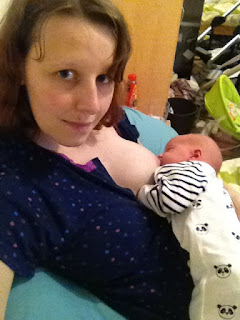 I was always quite happy to show the world that I was a breastfeeding mum. I was happy to post photographs and would never shy away from feeding in public. Best place I ever did it was at the Sealife centre in front of a huge fish tank. Haha


My Favourite time to feed her would be her 11pm wake up. She always woke at that time for a feed and it was always the feed where she snuggled up close to me and the dimmed light of the room made it so relaxing. It was moments like this when feeding her was special to me.

I had some funny times to, like the first time she worked out how to get it herself. We were casually laid there in bed together, and she just pulled down my top and then was suddenly just on my breast sucking away. I was like "woah" what just happened there! haha. Then there is all the times that she would happily pull my top down in public and reveal my breast to everyone. Thank you Lily.

I had decided in advance that I was going to stop breastfeeding Lily at a year old. Easier said than done. In October when Lily was 11 months old I met health visitor Sarah Beeson and she told me that Lily would just stop when she was ready and not to worry about it to much. It would just happen naturally she said.

It was when Lily was about 12 months old she would cut out the day time feeds. The way I did this was to start to introduce bottles of cows milk and also extra snacks instead of giving her the breast when she asked for it. The snacks worked brilliantly for during the day and each time she pulled at my top for the breast I would hand her something like a rice cake or a fruit pouch. 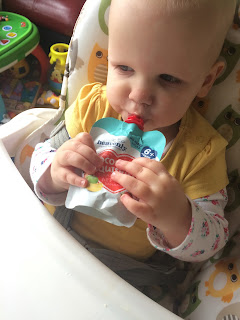 But Lily wasn't ready at first to give up that feed before bed and it wasn't until around 14-15 months that we managed to start giving Lily a bottle of milk before bed instead of breast. We encouraged this by doing story time. Lily would quite happily sit on my knee with a bottle while I read her a story.

So now it was just the night feeds she was waking up for. Part of me really wanted to stop them but part of me didn't. I thought maybe she will sleep better if I stopped. But then also she may not, and then it would take me longer to get her back to sleep, as for the moment the night feeds were a quick way to settle her. Then there was the issue of how would I do it. Lily knew I fed her in the night and would point to the seat we sat in and I know she would really kick off if I said no. Also its not like with a bottle where you can just not take the milk in with you, she knows where it is and can smell it. I felt mean almost saying "yes, here it is.. but you cant have it".  Also part of me wasn't ready to give up that lovely bond of feeding just yet.

So I held off for a little while and carried on with the night feeds. The stopping of breast feeding really was a bigger deal than I expected.

Then a few weeks ago I was really thinking about breastfeeding. One of my thoughts was that I do want to have another baby eventually and that I really do need to give my breasts a break from feeding before having to do it all over again. I though to myself, okay I'm just going to have to stop.

Well here is the thing. It was much easier than I though. Lily suddenly started to sleep longer only waking once a night. So I started to offer her some milk in a bottle and she took it. That was it. The end. She no longer was wanting my milk and she hasn't asked for it since. I do believe that Sarah Beeson was right in saying she will stop when she is ready, and she has. 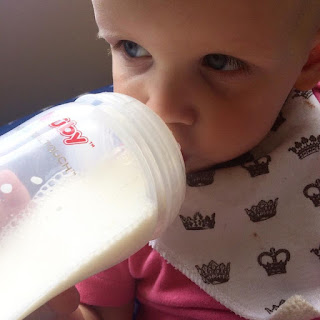 So how am I feeling about it now.

At first I did feel a little sad, knowing that I would never do what I've done every night ever again with Lily. But also relieved that I could have a break from it. Also I'm feeling a little sad about the fact my breasts are getting smaller. I have been enjoying them being on the larger side and i must admit I have just started to get used to the change in them and now they are changing all over again.

One question I have been asked though, is am I still producing milk?
The answer is yes I am, which I do think is crazy as I used to always worry that if I stopped for a few days then that would be it and I would dry up. But its been two weeks and I still have some.

So thats it now for breastfeeding until next time. Its been an amazing time and Im so glad I did it. If you are umm-ing and ahh-ing over if you should do it or not, then I would really recommend giving it a try as it really can be a amazing experience that you really don't get to do for long enough.

I would love to know your thoughts on breastfeeding if you have ever done it.

Did you find it easy to stop?

What was your favourite breastfeeding moment?

Ever breastfed in a strange place?
Posted by LilysLittleLearners at 14:07