When it comes to milestones, I could talk about rolling over or crawling or her first smile. Some of these came into my head when I thought about what was Lily's biggest milestone. But then I thought about the biggest one yet. Lily becoming part of the family.

The first thing you need to know about my family is that we are very close but yet so far. My parents, grandparents, brother, cousins, aunts and uncles and close friends all live hours away up the north of England while I'm in the south in Surrey.

The distance was never a big issue and when I moved here 6 years ago the fact that one day I would be giving my parents a grand daughter wasn't what I was thinking about and I was moving down south for my career. Over the years I would always miss my family and visit about 4 times a year. I'm really close with them all and always make the effort to see them but 4 times a year felt enough.

As for the other side of the family, they are wonderful and I get along with them all so well. But even they live a good hour away from us.

In 2014 I fell pregnant with who is now my 18 month old little girl. Lily. I waited a whole 3 weeks before telling my family as I wanted to tell them all to their faces. That was important to me. It was definetly not a over the phone thing. My family was delighted about the news and later in the year we all celebrated by having a big family baby shower.

When it came to having Lily, my mum wanted to be there and I wanted her there for the Birth. With my parents being a 5 hour drive away it was always a big wonder to if they would make it or not. Something that worried me through out the last weeks of my pregnancy. We made plans of what would happen if the baby came early and mum and dad both took 2 weeks of work around the time I was due. Lily decided she wasn't making a appearance and I was booked in for induction so that meant my parents could drive down the day before and my mum would definetly be there for the birth. I was relieved.

Luckily I didn't need to be induced and Lily made her way into the world by herself on the 18th of November at 10.40pm. It was lovely for my mum to be there for Lily's first moments, and after I had met her and my partner had had his cuddle, she was passed to my mum to meet the first member of my side of the family. This was a special moment for both me and my mum and I still remember her face looking down at her new little grand daughter. She had eyes of Love.
I think it was this very moment that has built such a bond between Lily and my mum. 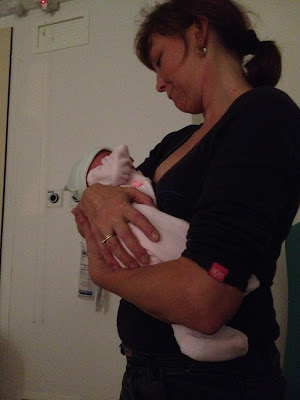 While I was in labour what I didn't know was my entire family was on the edge of their seats. My dad was back at my flat pacing the floor waiting to hear what was happening and everybody up north waiting by the phone to hear the news. I always look back and giggle at this but everyone was so eager to congratulate me I kept getting handed the phone for a quiet chat. At the time I didn't think much of it but I was actually getting stitched up and so the thought of me holding conversation with my family while I laid there legs spread with a midwife between them I always find quite funny. But it is always a nice thought that they were all thinking of me at that time.

Later that night the hospital was nice enough to let my dad come and visit for half a hour. One thing I always remember is that I felt like he was proud of me, and having my dad sat next to me while I held my daughter in my arms was such a special moment for me. He didn't hold her that night as she was sleeping in my arms at the time, but the next day as he came to take us home he got to hold her and he had such a big smile and I will always remember that moment. 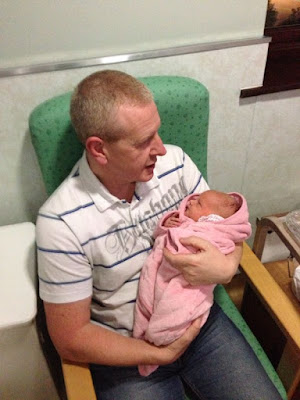 Over the next few days we had visits from my partners side of the family. I remember being so worn out but was really nice to see them. One by one they all had a cuddle with Lily. There was one moment that stuck out more than others though and that was when Lily met her cousins. As their mum was taking photographs of them all together I actually got a tear in my eye as it was this moment that I thought.. thats the new part of my family right there. (You can actually see me in the background trying to hold back the tears) 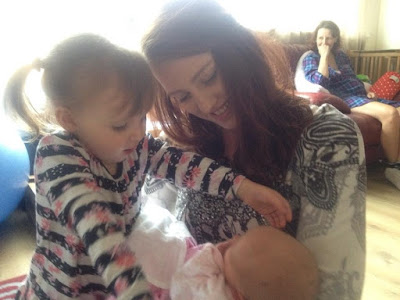 After spending a week with Lily my parents went back up north and that was it for meeting new family until after christmas when Lily would have the next big family meeting. This next meeting would be a big milestone for Lily as not only was she meeting a huge amount of my family and friends but she also had to travel 3-4 hours to see them.
Lily was now 6 weeks old and me and my partner and Lily traveled on train to spend a long weekend with my parents. Luckily it was a easy journey and Lily slept the entire way there.

Firstly Lily met my brother. Her Uncle Dan. Lily had started to do a few smiles here and there and one thing I will remember is how she had the biggest smile when she was first held by him. My brother was beaming himself and I think it was seeing my brother so happy that made her smile. 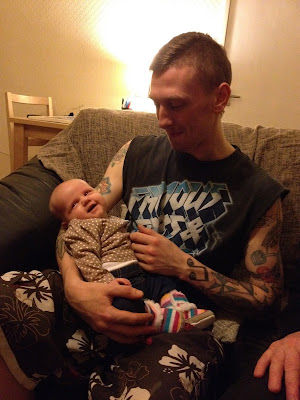 The next day we headed out for dinner and met up with my Grandad and his partner. I Love my Grandad to bits and he has always been there for me and we have always had a close relationship. Introducing him to my daughter was such a lovely moment and she looked so tiny in his arms. 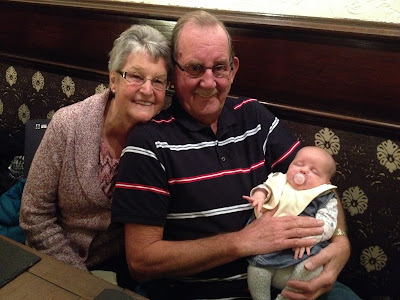 I had so much family to introduce Lily to that we thought it would be a lovely idea to hold a party, and so we had planned for the rest of the family to come around the next day. I put Lily in a little party dress that I had bought a few days before she was born. It was a dress I was umm-ing and Ahhh-ing over for a few weeks and I always think thats what Lily was waiting for me to buy before she would make a appearance. She looked so pretty and I couldn't wait for everyone to meet her. Lily handled the day so well. She smiled, she was happy to be passed around, she slept in peoples arms, and she even pooped on someone. Lily was definetly happily introducing herself to the family. That was such a lovely day and such a big one for Lily. She fell straight asleep after the party.  I will always remember feeling so proud of my pretty little princess. 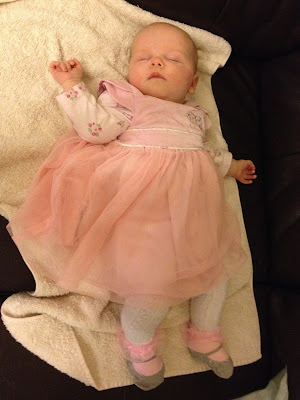 Family is so important to me, and I think its nice to keep such a close relationship with all members of it. I always want Lily to know that she has family and that they love her and are always there for her. This lead to Lily next big family milestone. Her naming ceremony, also known as a family welcoming ceremony.

We had this for Lily when she was 5 months old and the day was lovely. It felt so nice that my family had all come to be there for Lily on this day. We decided to have the ceremony in the north as my partners family were happy to travel to attend the day. I wanted to do something for Lily so she would have something to keep from the day and this is where I made her a beautiful charm bracelet. Not only did I want to be able to give her something when she was older, I also wanted her to be reminded of how much love her family has for her and so I got words inscribed onto the charms. They were words like Love, Care, Support, Teach and said all the things that family provides for her and always will. I got members of my family to stand up and place a charm onto the bracelet. It was a really nice part of the ceremony. 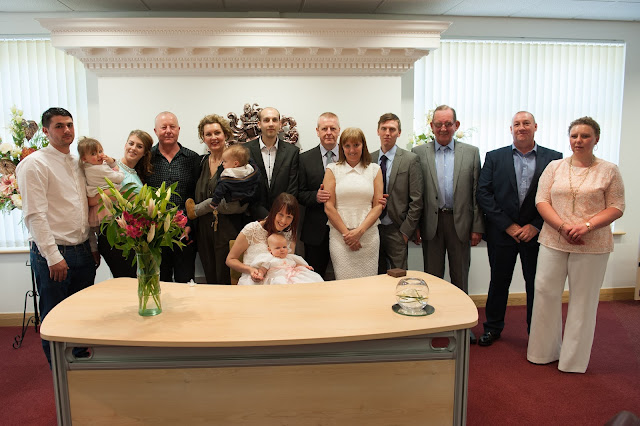 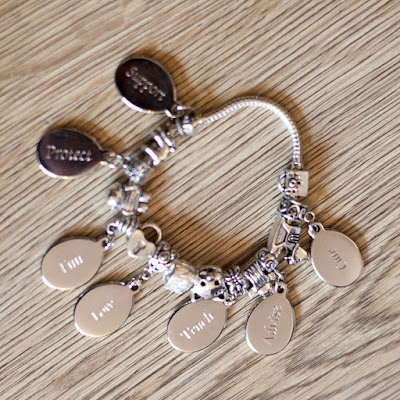 Lily becoming part of the family will always be a special milestone in my heart and in my family's and its a milestone that definetly cannot be forgotten about.
I always make sure that Lily gets to see her family often and she gets to see her grandparents on an almost monthly basis.

My family. The most special thing in the world and Im so glad that Lily is now part of it. 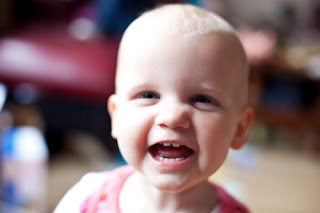 This is written as entry to theTots100/WaterWipes Baby Milestones challenge. Its written by me about my personal experiences.
Posted by LilysLittleLearners at 22:29