Lily has been a huge fan of Wow Toys since she turned one year old and used one of wow toys countdown calendars for the days before her birthday. When she had opened all the windows and the set was complete she played with it non stop and thats when I knew I needed to get her more.

Over the last 6 months Lily has gained a nice collection of Wow Toys including a Wow Toys play mat which you can see in the photographs in this review.
I was so excited when I found out I was getting something sent to me to review from Wow Toys and couldn't wait to find out what it was going to be.

When it arrived, I opened it up, And it was a Casey Camper Van. I was really impressed with it. It was the biggest Wow Toy that Lily would now own and I knew she would love it. 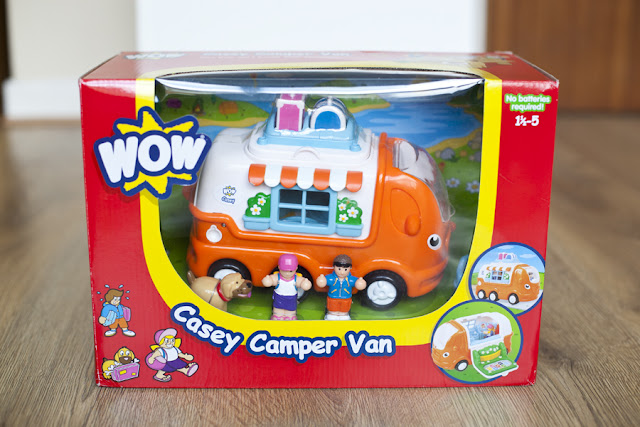 Lily was napping when it arrived and so I placed it in front of her toy box and left it for when she woke up. A good hour later she woke up and came into the living room. I didn't point out the toy and wanted her to spot it herself and she most certainly did. She ran straight to it and was quite excited and even managed to pick it up to bring to me. I think she was trying to say she wanted it open straight away. 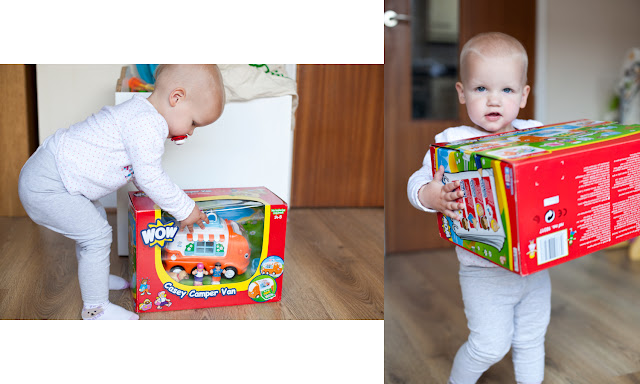 So after we got it open I had a better look and the camper van has so much to offer. 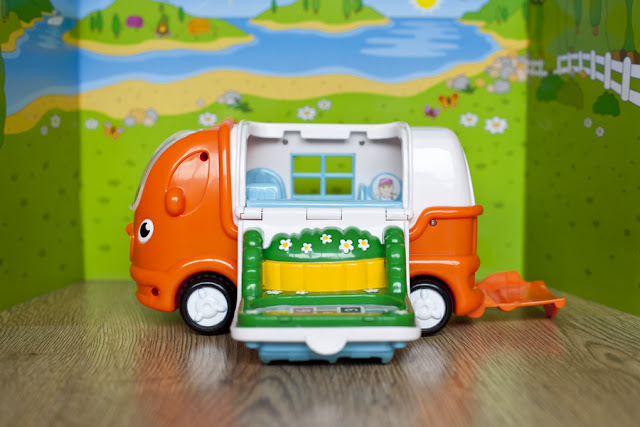 Features
Firstly the side opens up and comes down and has a little hopscotch on it. Also the back lifts down to for the figures to be put in and out of the camper van.
Inside the camper van there is a little bed and sink and dresser. Lily loves putting things to bed so I knew this would be a feature she would like.
It comes with 2 little figures, a girl and a boy. There is a little table and chair set that they sit in that also fits into the hopscotch area.

The front opens up at the window and a little figure can be placed in the driving seat.

There are 2 suitcases that also can be placed into little slots on the roof.

The cutest little feature is the little dog that comes with it, with its own little basket to sit in.

The car pushes along the floor with a Vroom noise as it moves.

No batteries are required, simply take it out the box and play! 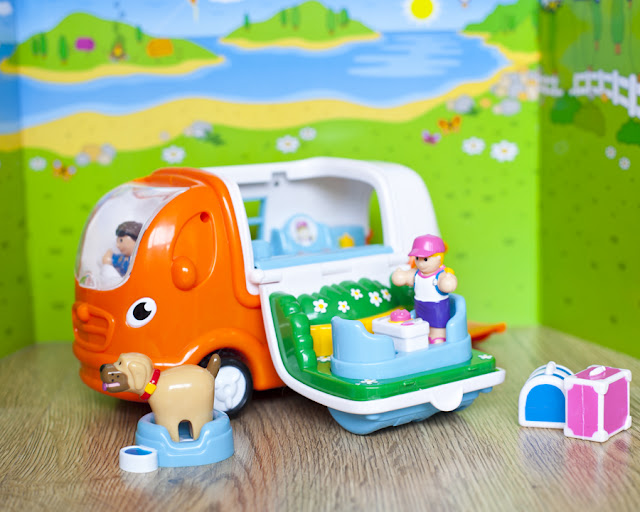 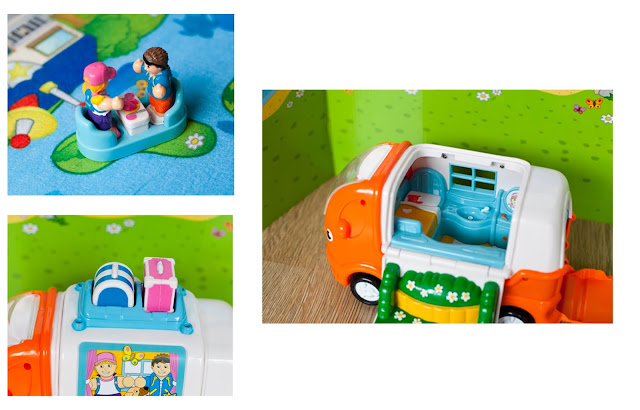 What Lily and I thought

Just as I though, Lily loved the camper van. Her favourite thing to do is place the little characters into the little spaces and this camper van offers loads of opportunities for that. She loved putting the characters to bed and at one point brought her dolls blanket to put over the character which was sweet, but funny as obviously it was way to big.
She loves placing the character in the driving seat and placing them in the little seats that are at the table. She would happily play with it for ages just putting them in and taking them out. She also moved the characters around chattering away with them. The camper van is just great for little imaginations. She also found it fun to lay a character down on the hopscotch and then shut it up making the character fall inside. Hours of fun!
Lily has had this for way over a week now and she gets it out to play with each day.
As for pushing the camper van, the first time she did it she pushed it really hard and the Vroom noise it makes as it moves is quite loud and actually scared her a little bit. She jumped up and jumped on me, so I think she would of preferred to have it without the noise, or have the noise a little quieter. This was probably the only thing we didn't like about the camper van. Lily does like making the vroom noise herself, so for us its a feature thats not needed, but I expect older children who really love there cars may love that it makes a loud vroom.

The quality of Wow Toys is brilliant. The plastic is a hard plastic and can take some bashing. Wow Toys slogan is that they are Toys that don't Break their Promises. Well as well as not breaking their promise in customer satisfaction and fun they also don't fall apart when bashed. Lily will often drop them on the floor and we have never had anything break.

The characters are all happy and friendly looking and the toys are so colourful which is lovely to see. They have a cuteness factor about them that is really child friendly and they look really playful with there eyes, rather than looking to realistic.

Overall we were so happy with the camper van just as we are with all the Wow Toys Lily owns. 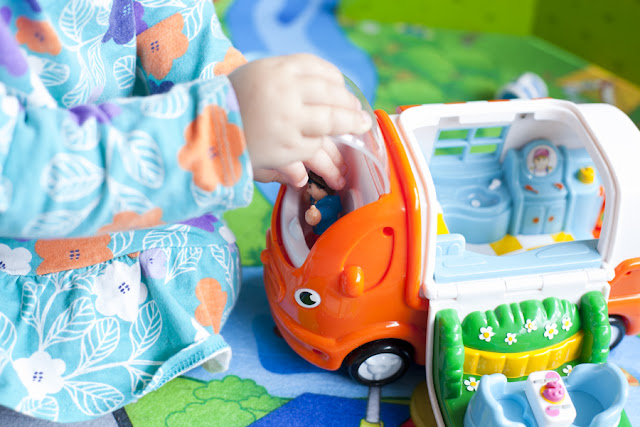 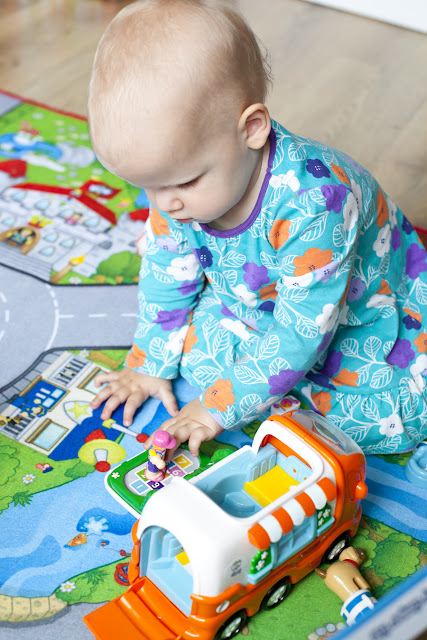 About
The Camper van is part of the Holiday and Adventure range and is aimed at Children aged 18 months to 5 years old.
You can buy the camper van online or see if you local store has it in stock. Wow toys have a list of stockists online here.
Or if you want to see what else Wow Toys has to offer, which I highly recommend as there is a great choice, then you can head to the website here.

But you are in luck, Wow toys have kindly let me run a giveaway to give you the chance to win a Casey Camper van yourself. All you have to do is enter on the Gleam app below. Good Luck!

Win a Wow Toys Casey Campervan
Posted by LilysLittleLearners at 00:03