I've always been a huge fan of Oxo tot ever since I started using there training plate with Lily. I always found that it was really good quality and really easy to scoop from. We used this from when Lily was about 8 months old and so her solids were getting lumpier and she was starting to eat things like peas that can be tricky to get on a spoon. I have used the plate so many times in the past and Lily and I love it. 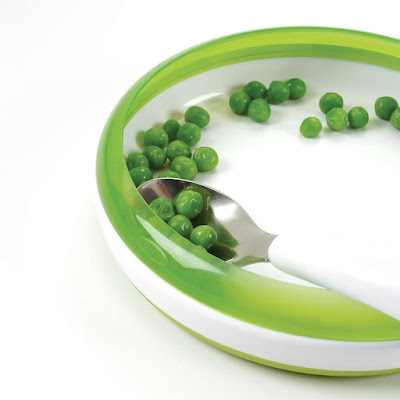 After then getting my hands on a amazing divided dish and giving that a try, I decided to contact Oxo tot to tell them what I thought about their children's feeding items and how much I love them. We then thought it would be a great idea to also share what I think with you, my readers, and so Oxo tot agreed to let me pick 3 more items to review along with the dish I already had.

So today I'm going to tell you all about my mealtime experiences using the following products. 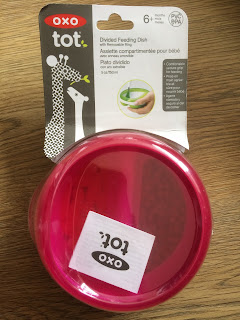 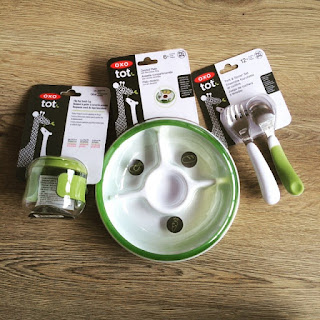 The first time Lily and I used the divided dish was for a picnic one day. It was perfect as it came with a lid and as it has 2 sections which means that your food doesn't all get mixed together when out on the move. Then when she didn't finish it all, I could just pop the lid back on and save it for later. It holds a really decent amount of food to and I put her cheese and ham in there for her. After using it once I couldn't wait to use it again.

After I received the rest of the Oxo tot items I decided to see the different ways I could use the plates and would put them to test at different times of the day.

So lets start at breakfast. Lily always starts with a nice helping of cereal and fruit and then follows with toast. I usually end up putting her cereal in one dish and then fruit in the other but on this morning I could serve it all in one dish. 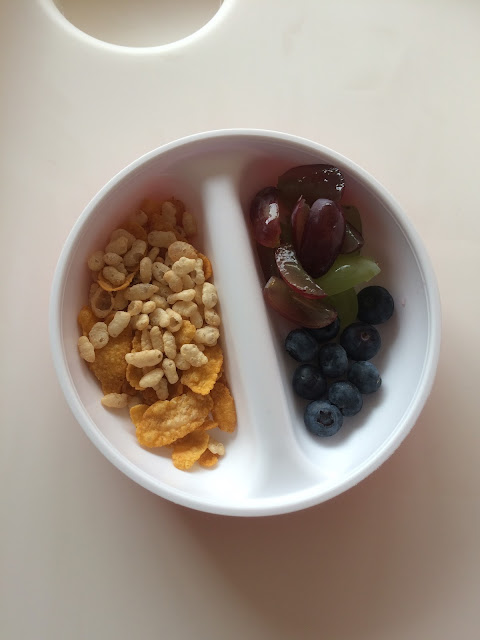 The dish is great, I get to save on washing up with only having the one bowl to clean and as it has the two sections it means that her cereal doesn't stick to the grapes. She really hates that. I could of used the divider plate and put the toast on that but knowing Lily she wouldn't eat her cereal if it was all in front of her.
The dish also came with a detachable ring that makes the dish deeper. This is so then if need be a spoon can be used and its much easier for them to get the food on the spoon, but in this case Lily just eats with her hands and so its easier to be able to pick up the food without the ring. 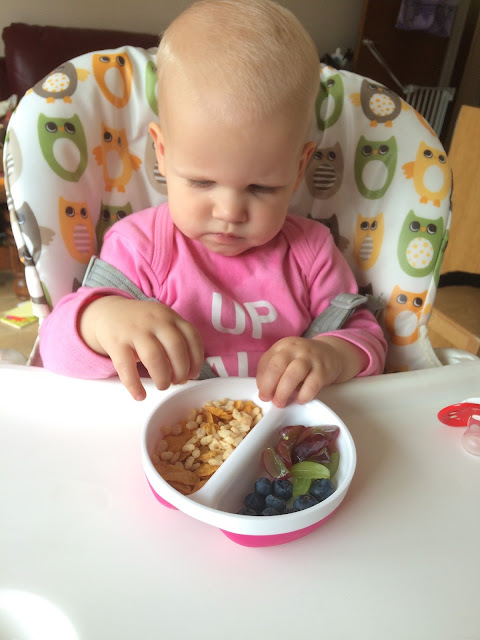 The dish is such good quality to. Really sturdy and the plate doesn't slide around on the highchair tray. 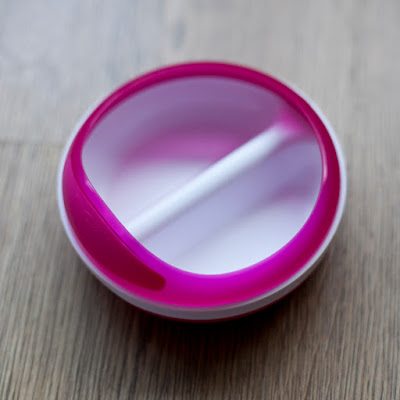 Next we have lunch time. Lily has always had a picking plate for her lunch. She always has some salad, ham and cheese with crisps, and crackers or cracker bread. I've always separated her foods onto the plate and never given her it all mixed together as she seems to like to eat each bit individually. I've always wanted a divided plate for exactly this and didn't know Oxo tot did one. I was really impressed and excited when I saw one on the website and definitely had to choose it for this review.

I couldn't wait to give it to Lily for her lunch and so placed all her different foods into the different sections. I put the ham in the middle as it takes up the least amount of room. I put her salad into the large section which is her cucumber and olives on this occasion. Then I put her cheese in the other and the crisps and crackers into the last one. 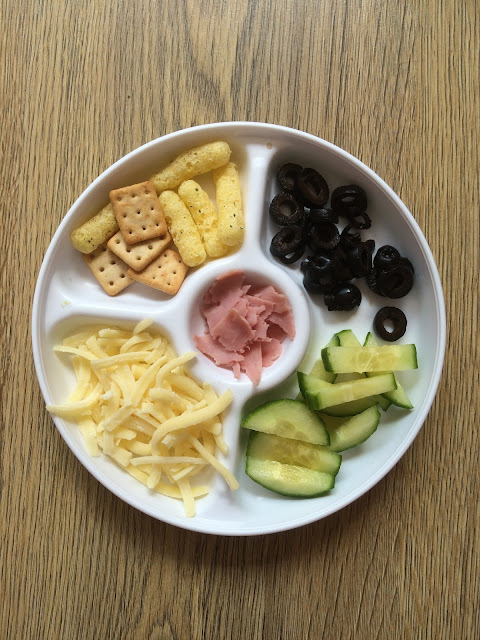 Lunch went smoothly and Lily ate most of it. I do think that serving dinner on the right plate really helps them eat it all. Also she didn't pick this plate up to tip it out so she must have liked it. Again the plate is really good quality and doesn't slide around the tray. The plate also comes with the detachable ring that we decided to take off for lunch so it was easier for her to get at her foods. 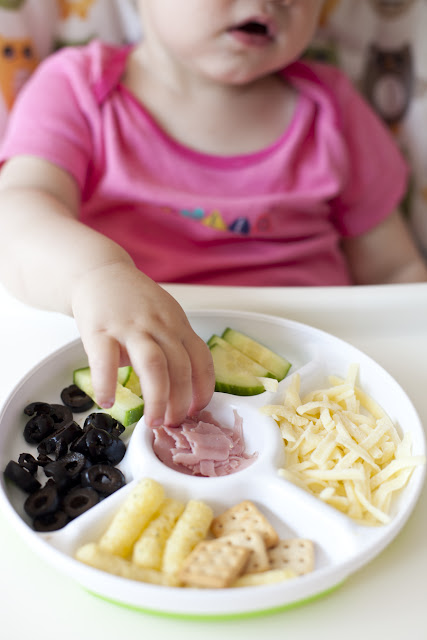 Next up is snack time which quite often can be a meal between meals that is on the move. When I saw the snack pot on the website I knew it was perfect for us. Firstly at home, snack, weather it be crisps, fruit, mini biscuits, they all end up everywhere because Lily will carry around the dish and then they would fall out everywhere all over the floor. This is why the snack cup was perfect and when used around the house it kept all the snack where it belonged, In the snack cup.

The snack cup I found had an even bigger use though. That was for lunch on the go. One day last week we went out for the day and I needed to pack some cheese and crackers and crisps for Lily. I decided that it would be a great opportunity to try out the snack cup that I had got from Oxo tot and I put it all into the cup for her. 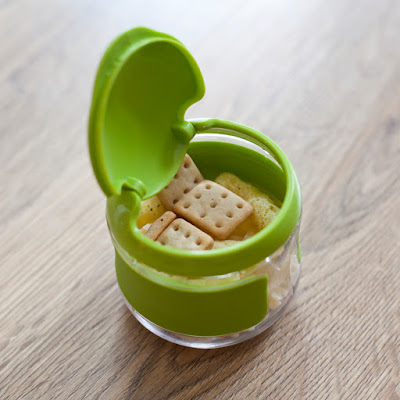 I was really impressed with how much I could get into the cup and I got all I wanted to in there. The cup is really nice quality and the lid clips down firmly so nothing will fall out and its not a flimsy lid at all. The amount of times I've gotten annoyed because I can't get the lid on a snack tub and this is just perfect as it just flips down. The size of it and shape is perfect also. I love that it fits nicely into the pockets of my baby bag. Although on this occasion I popped it into a cool bag with the rest of our food.

When I gave it to Lily to use she was sat in her pram. I opened up the lid and gave it her. It fit in her hand perfectly and her other hand could fit into the cup perfectly to get out the food. She could get a really good grip of it and so this really helped her sit and eat her food.

I think the thing that Lily did enjoy the most was the little lid. After each piece of food she ate she would clip the lid down. Though to her frustration most the time she couldn't get it back open herself and I had to keep doing it. But that's Lily being Lily, she just has to play with lids. 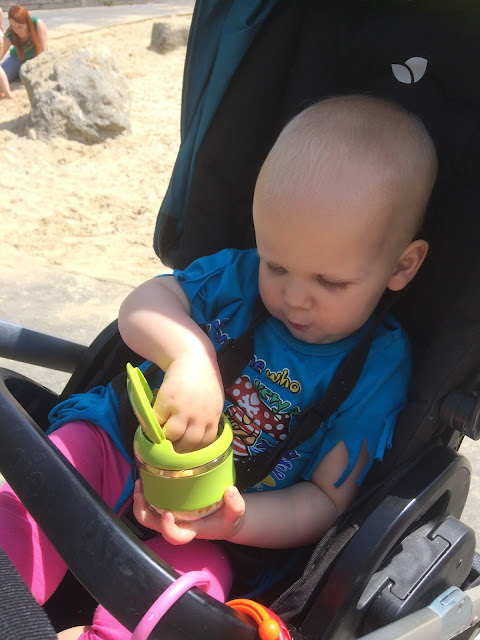 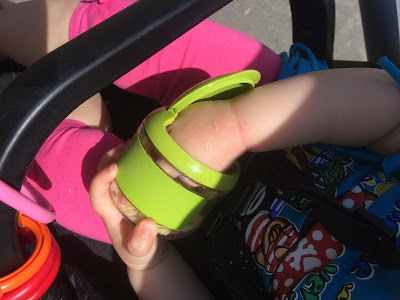 So now we have dinner and dessert. The perfect time to get my new favourite divider plate and bowl back out and also give the spoon and folk a try.

It was a Sunday afternoon and we were having Sunday lunch. So I popped the removable ring onto the plate and put her meat and vegetables and potatoes into all the different sections for her. Lily is only just learning how to use a spoon and folk but I must admit that she did really well with the Oxo tot ones. She managed to stab a potato and get it to her mouth with the folk. 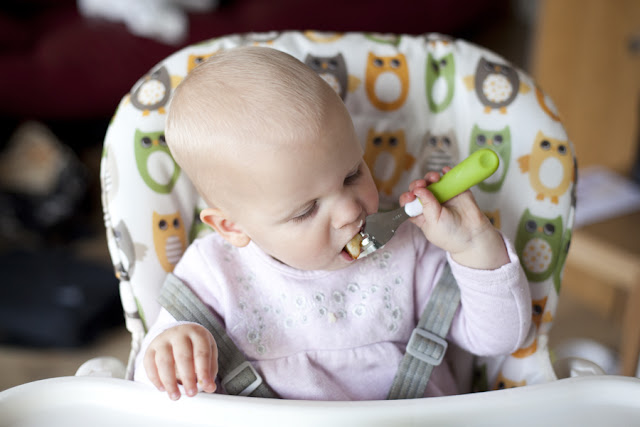 I think what helps with using the folk and spoon are the nice big handles. They have a really good grip material and are chunky enough but not over chunky for a toddlers hand. They also dip at the end after the handle which I think helps for the scooping action. 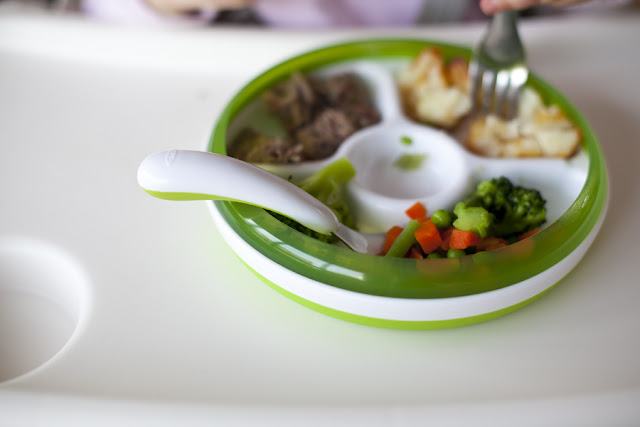 Lily usually gives up with the spoons I give her but she gave these a really good go. Also the removable ring that I left on really help her be able to get the food onto the spoon when she scooped.

Last but not least I gave Lily some dessert. I used the divided bowl as Lily can be a little fussy with sweet food and so I put the fruit in one side and the cream in the other just she could choose if she wanted to eat it or not. Both the plate and bowl are so good for fussy eaters. Some children won't eat something they like just because something they don't like is touching it.

Luckily Lily liked her cream and used her spoon to eat it with. 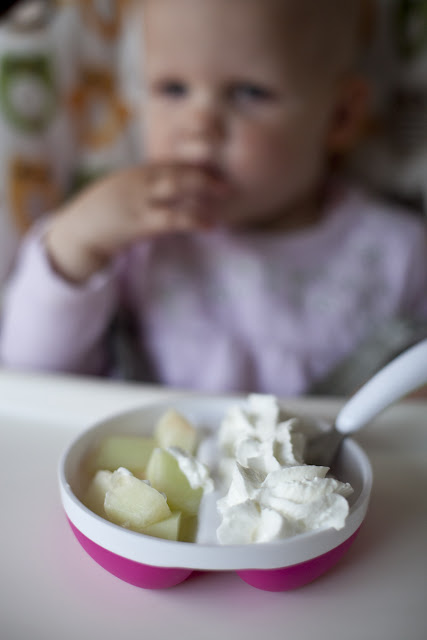 So overall mealtimes with Oxo tot are pure perfection. I would 100% recommend them for your toddlers and will definitely be using them for my toddler needs in the future.

I would love to know which of the above products you like the sound of the most? Or Do you have a fussy eater and think that Oxo tot could help with that with one of there divided plates?

Head here to check out all that Oxo tot do. Also while your here and loving what you are seeing. You can head over to my giveaway post and enter to win a entire feeding bundle. If you comment below you can gain a whole 5 entries into the competition.

Posted by LilysLittleLearners at 23:11