One of Lily's favourite things is books so here is a list of what I think Lily would consider her current top 10. 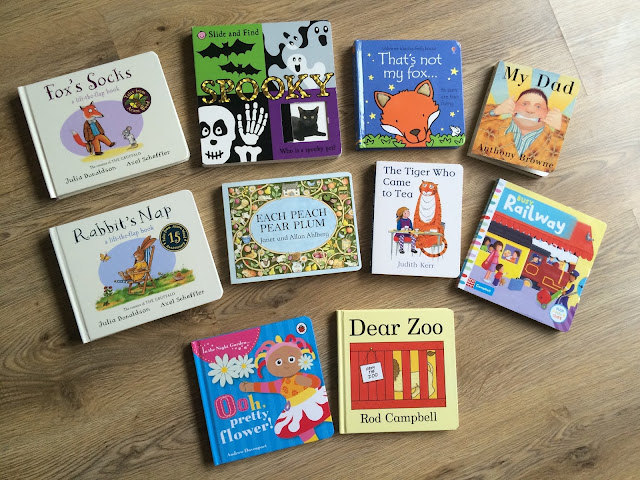 10. Busy Railway - Campbell Books
Lily loves this book for the things to pull and slide. It has trains going in and out of the station and barriers that lift up and down. Its quite sturdy so great for little hands and not very easy to rip which is also great for Lily's age. The book is also really colourful so really inviting. This is just one in a series of many pull and slide stories by Campbell books.

9. Spooky Slide and Find - Priddy Books
This book has lots of little windows to slide open and Lily loves to slide them open and reveal what is inside. I think its also the contrasting colours that makes it so appealing to Lily. It also has a cat on the front that looks just like our cat which impresses her. This is a great halloween book though Lily seems to be happy with it at any month.

8. In the Night Garden - Ladybird Books
In the Night Garden is one of Lily's favourite things in general, but she loves this book because it shows a lot of Upsy Daisy in it and she will point to her and get excited. In This story Upsy Daisy is interested in her pretty flowers while Iggle Piggle rides the Ninky Nonk train.

7. Dear Zoo - Rod Campbell
Lily loves asking what things are and its her favourite thing to say. This book you lift the flaps and reveals the animal and Lily Loves asking which animal it is.

6. That's Not my Fox  - Usborne Books, Written by Fiona Watt
Lily loves her touchy feel books and has quite a few of the Usborne "Thats not my" ones,  but she seems to love this one the most and gets it out more often that the others. She loves stroking the foxes tail and going "Awwwwww".

5. The Tiger who came for Tea - Judith Kerr
I'm really glad that Lily loves this story so much. Its a classic. She will always listen to me read it to her at bedtime and has learnt who daddy is in the story and will point to him and say daddy. The story is nice and calming and so a really nice bedtime story.

4. My Dad - Anthony Browne
This is such a lovely daddy story and we read this most night at the moment. It shows dad being the hero and really good at things. Lily points to the dad in the story and says daddy, which is much to Chris's dislike as he doesn't resemble the character at all. Haha

3. Each Peach Pear Plum
We love reading this story at bedtime. It has such nice rhymes that really keep lily engaged in the story. The story talks about each character and where they are and what they are doing and you can see that in the picture. When I started reading it to her would always point out the characters and now Lily copies and has started pointing to them.

2. Rabbits Nap by Julia Donaldson
Rabbits nap has come close second to foxes socks because Lily has always shown a little more excitement to foxes socks, but they do follow each other closely and she likes them both for the same reasons. In this story Rabbit is trying to nap, but behind the flaps are things happening that keep disturbing her.

1. Foxes Socks by Julia Donaldson
Fox has lost his socks and this story is all about where they could be around the house. You lift the flaps to see if you can find them. Foxes socks is currently our favourite to read together. Lily loves to pull open all the flaps and there are a few things under that she points to and asks what's that? The rhyming in the book is really good and just like each peach pear plum, it keeps her engaged in the story.
Posted by LilysLittleLearners at 13:25