7 to 12 months may be a little brief, after writing it I have realised I have struggled to put the finer details in there. You really don't realise how much of it you forget and I urge anyone who is reading this no matter what age of the baby, to jot down all those special moments.

7 months old and its finally summer time. I took Lily on plenty of outdoor trips and she had her first go in a swing. 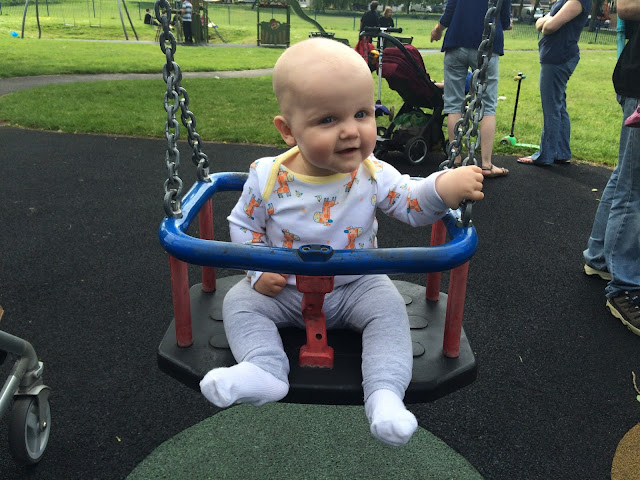 Lily also loved a picnic! We had plenty of these and would take snacks, and fruit. Lily loved her organix rice cakes. 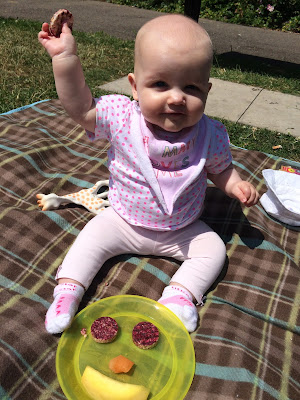 By now Lily was sleeping in a a cot, she was still cuddling her bunny teddy that I got her for easter. 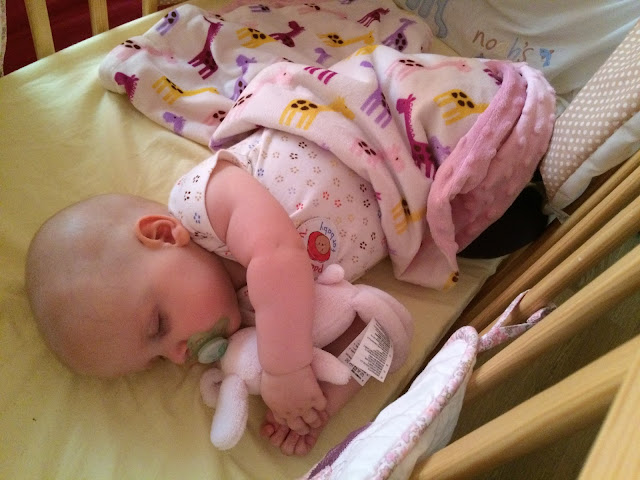 At 8 months old Lily had her first holiday. We went to Weymouth in Dorset and its such a lovely memory to remember. Lily had sort of been to Weymouth before though as it was the same place we went when she was in my belly.

Lily got to see loads of new things, the sea, the sand, donkeys, boats, fish and she had a really good week.

Lily's first trip to the beach was great. She really enjoyed digging in the sand and putting her hands in it and feeling it. We did dip her in the water but she wasn't to keen. I don't blame her, the water was freezing. 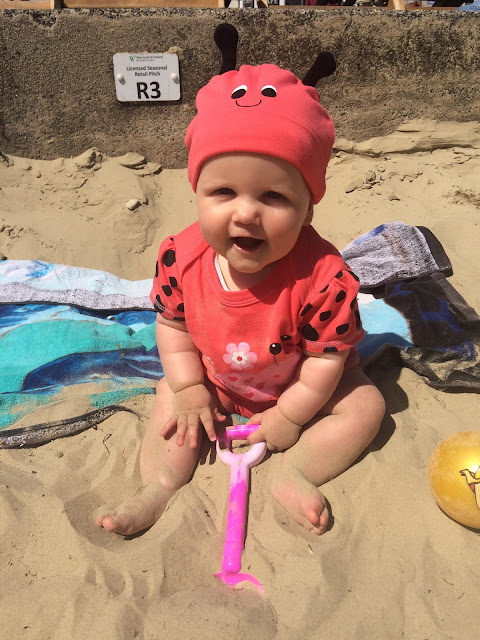 Lily was into everything at this point, and everything would go in her mouth. (Even tasty leaves) Yak! She loved to go to the park and explore or play with her ball. 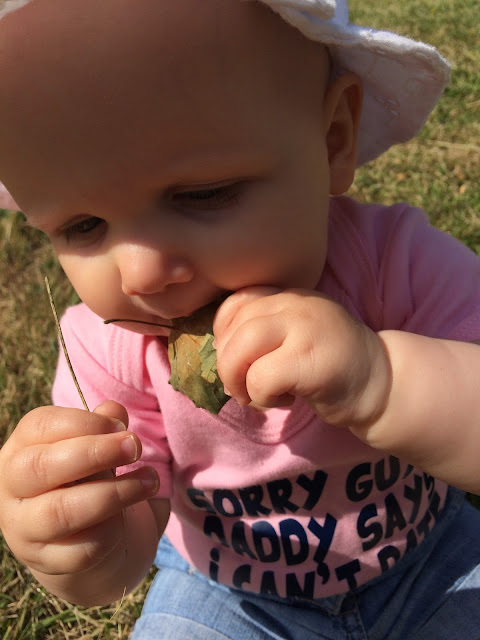 At 9 months, Lily started to take a lot more interest in herself in the mirror, she would sit in front of it and kiss herself and raise her arms and watch herself do the actions. 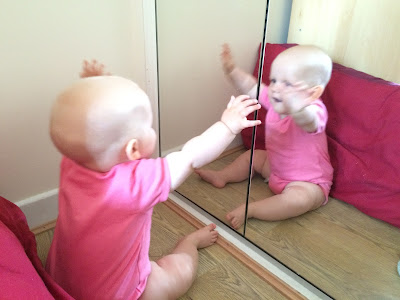 It was around this time Lily started to crawl, I was rolling a ball along the floor and she dragged herself along the floor to get it! I was so pleased with her and proud.

Every week she got stronger and stronger at crawling, and faster. Lily also started to use her walker a lot more. She was now really fast in it and would speed around the room. 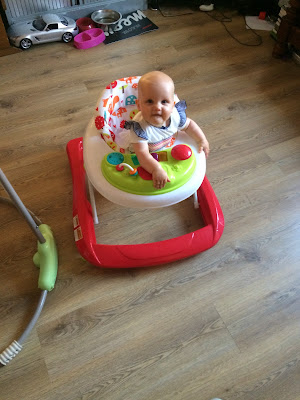 By 10 months Lily was standing up with support, she would need me or chris to hold her hands but was so pleased with herself when she did it. Not long after Lily was off and would take little steps as you held her hands. She managed to walk all the way along St Annes pier. 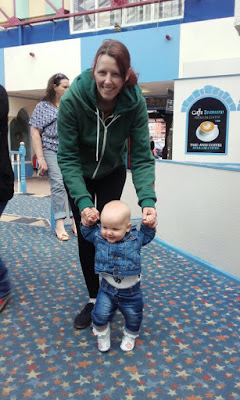 Soon after she got really confident with her standing and was soon pulling herself up to most things. 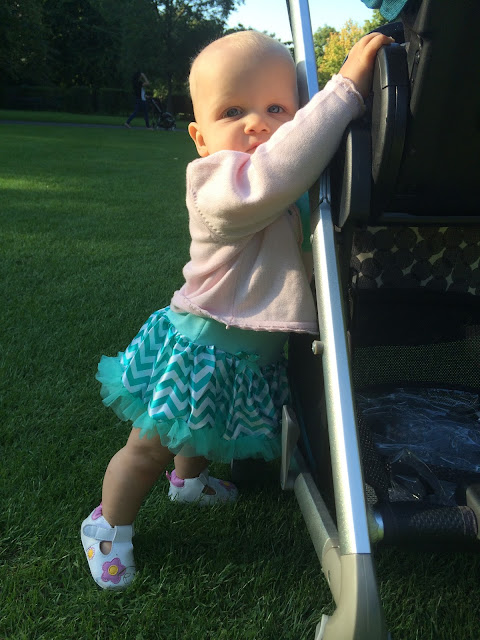 Lily also started to learn how to wave and would wave back if you waved to her. She started to wave at objects like cars and tree's, not understanding that you don't need to say hello to them. She was also saying "Hiya" when she waved. She also knew how to say "whats that" really well and would point to things asking what it was. 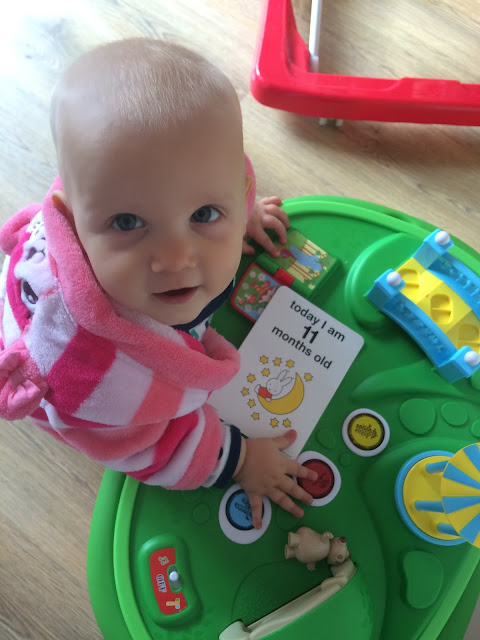 By 11 months not a huge amount had changed apart from her crawling had gotten better, she could easily pull herself up and stand confidently and her walking holding out hands was getting a lot more confident and she didn't wobble as much. It was at 11 Months I moved Lily into a cot bed, it was lovely for her to have all the space to move around.

You could tell in Lily's personality that she was about to be one soon, she was always trying to do things for herself, like put on her shoes, feed herself with her spoon. She started clapping when she did something and also had started moving her arms along to music. 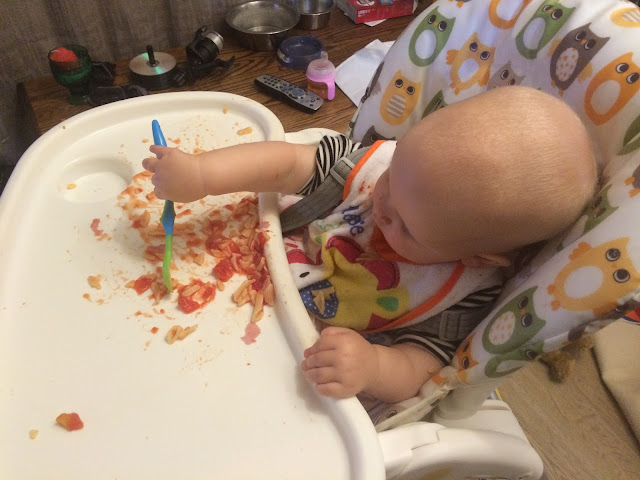 Its crazy to look back and see how she has grown from a tiny baby to a walking talking baby. Im really looking forward to what happens next.


Posted by LilysLittleLearners at 20:43