A Sweet Smelling Review of The English Soap Company


Soap is something that I must be honest, I don't use often. Not because I don't wash haha, but because I usually opt for hand washes and shower gels and body washes. So when The English Soap Company asked me if I would like to review there soap, I thought why not. Maybe I can be converted.

One thing I've never liked about soaps was the feeling of my skin being dry but upon reading the History and Heritage page on the website I learnt that the English Soap Company soaps have ingredients that help moisturise the skin and so this was something that made me want to give them a go.

They let me browse the website to choose the scent I wanted but they all sounded so nice that I couldn't choose and so I said surprise me.

I was sent English Lavender and Summer Rose. 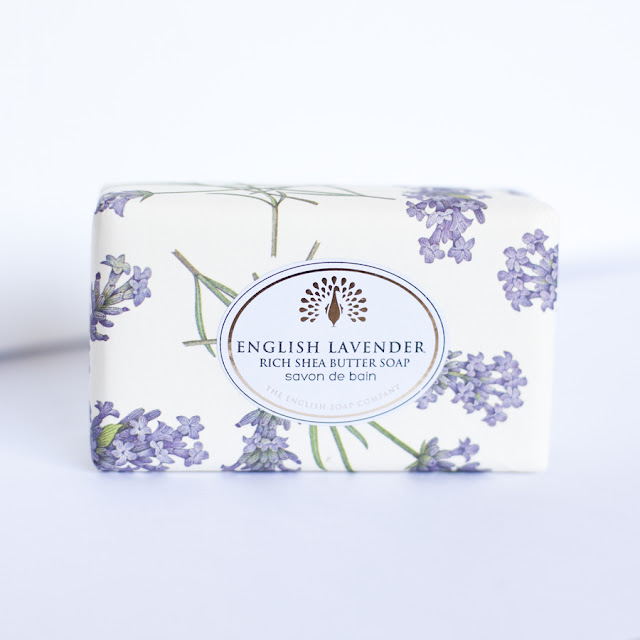 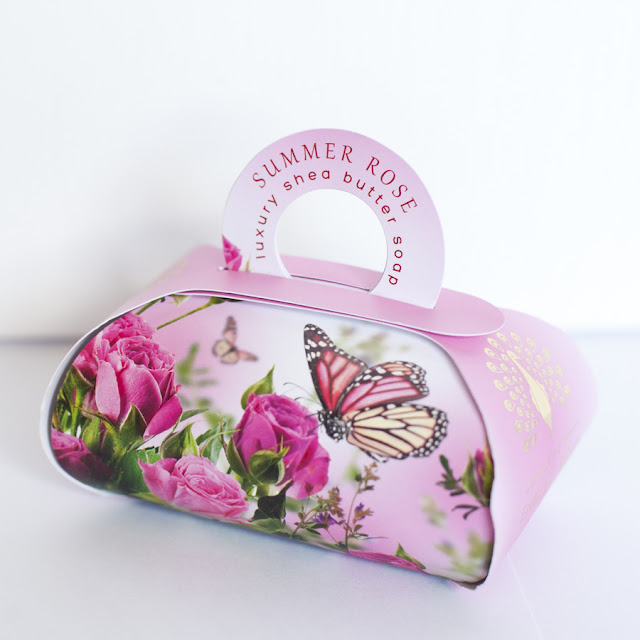 They smelt amazing. Some soaps you have to wait to use before you begin to smell them but not these. As soon as I opened the jiffy bag I could smell them and even after removing them from the room and leaving the jiffy bag there I could smell the scent of them from the jiffy bag.
I thought the packaging looked really nice. The Lavender one has a very country classic look to it which would make me want to buy it more as I love natural. The Summer Rose has a very lovely bag look to it and I love the picture of the butterflies on it. I would be more inclined to give the Summer Rose to someone as a gift.

Before using the soaps I wanted to test out the power of the fragrance. I always remember going to my grandmas house and she would put soap in her drawers to freshen her clothing up. I wasn't quite ready to photograph the soaps at that point so I thought my drawers were the perfect place for them to be stored for the time being. In they went.

The next day when I went to get dressed I had totally forgot I had put them in there until I opened the draw and got out a top I wanted to wear and it smelt so nice! Then I remembered that I had put the soap in there and that my plan to freshen my clothing had worked. So I must say that the strength of the fragrance of these soaps is strong, but in a good way. 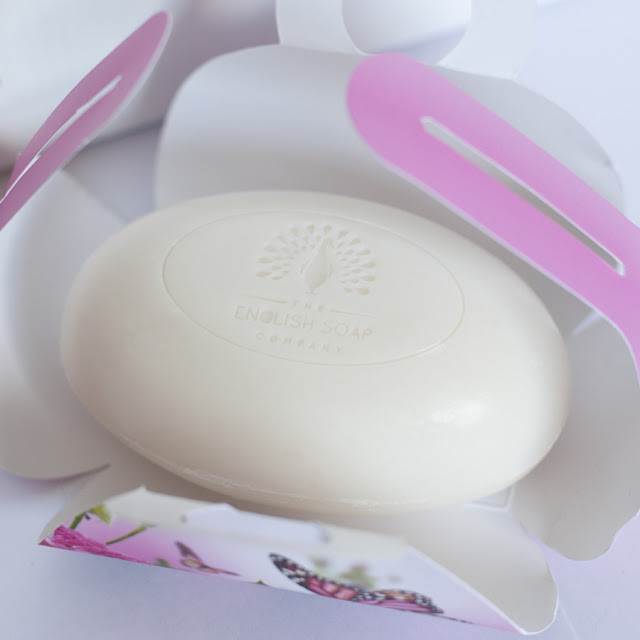 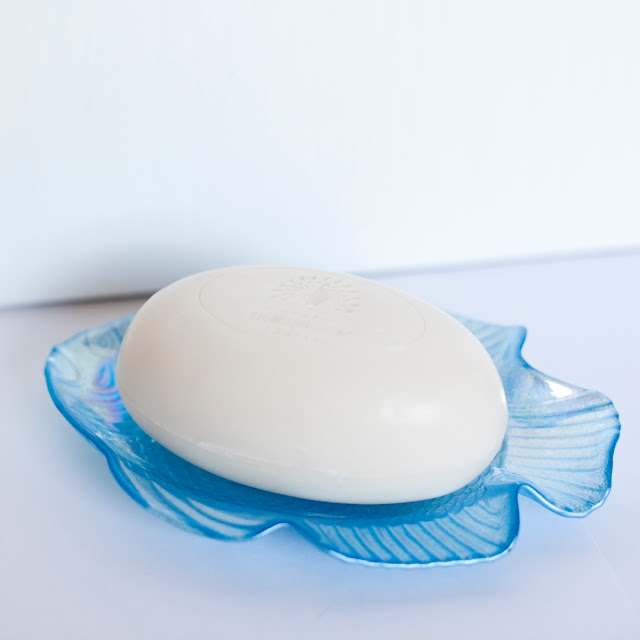 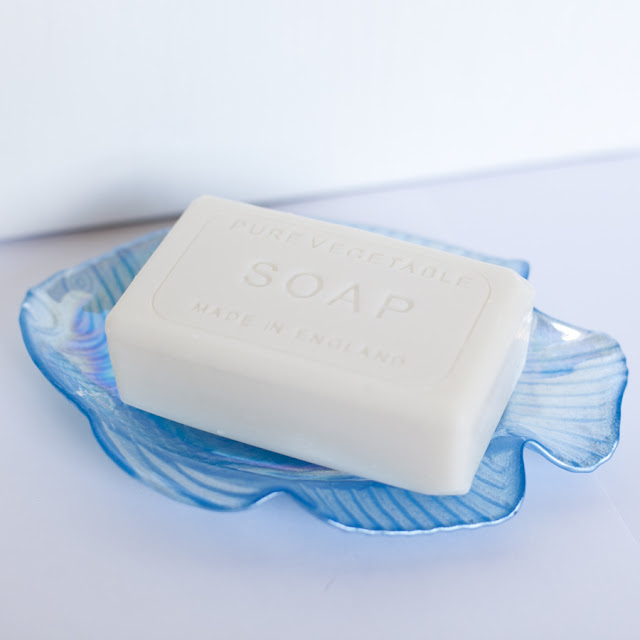 When I opened the soaps I was quite surprised at the two different looks to them. The Summer Rose looked beautiful with the English Soap Company logo on it, but the Lavender just had writing on it and I didn't think it looked great. Would have looked much nicer to have the logo on like the other one. I think they were going for a vintage look to it, but lets be honest, the vintage soaps never really looked that nice did they?

They were both really smooth though and that was a really nice quality about them.

I decided I was going to put the Summer Rose soap next to my sink for hand washing and save the lavender soap to wash with in the shower. I placed the soap in the bathroom and then left it for a while. The next time I went back into the bathroom...WOW it smelt amazing. The soaps had filled my bathroom with such a lovely scent. They had actually done a better job than the reed diffuser that has been in there for weeks.

As the scent was so strong I was a little worried that my hands would smell a little to much, its nice to smell fresh after washing your hands but then you don't want to be overpowered with it.

So I washed my hands. I was totally wrong about the overpowering smell, my hands smelt just the right amount of the fragrance. Somehow The English Soap company has managed to make a soap that is strong enough to make your bathroom smell nice, but yet not make your hands smell like your carrying around a bunch of flowers. Perfect!

The soap was nice to use though the shape and size of it made it a little hard to grip, though that may be my tiny hands fault. Haha. After placing the soap back down it dried up pretty quick and still looked just as nice as before I used it.

As for my hands being moisturised I would say it definetly does a better job than most soaps but any slight dryness to my hands and I go crazy and I must admit that I did use hand cream after as I normally do. I do think this is just a ME thing and any normal person would definetly be happy with it.

As for showering. I found that the lavender soaps shape made it a lot easier to use. I think if I would have used the Summer Rose soap I may of had a few of them juggling the soap moments but I managed to keep the soap gripped in this case. One thing I noticed about using the soap over a body wash was that the fragrance lasted on my skin. I sometimes have to use loads of squirts of body wash to get the same effect. I was very happy at how I smelt after the shower.

I think out of the two scents my favourite is the Lavender but I would be happy to buy either. Im not sure if the soap company has fully converted me to using soap as I do love my shower gels and body washes but I will definetly be considering having one next to my sink from now on.

The English Lavender retails at £4.95 which I think is a decent prize for good quality soap. The Summer Rose retails at £5.99 which I also think is great as it will make a lovely gift.

If you like the sound of The English Soap Companies soaps then you can head to there website here to buy some.

Have you heard of The English Soap company before? Ever used them? If not then do you think you would?

Posted by LilysLittleLearners at 14:37