I had read and heard all about the fantastic nappies by Japanese Nappies and so when they got in contact and asked if we would like to try them we were most definitely not going to say no. All they needed to know was girl or boy and Lily's size and they were on there way.

I have never been to bothered about which brand of nappy we use and have used quite a few and some I've liked and some I've disliked so this will be a great help when it comes to reviewing the nappies. Important factors for me when choosing a nappy would be how they fit and whether they leak or not and price.
A huge pack of 44 nappies arrived a few days later. It was quite exciting to be using a new brand of nappies after having used the same one for so long.

I was sent the Moony pull up nappies. 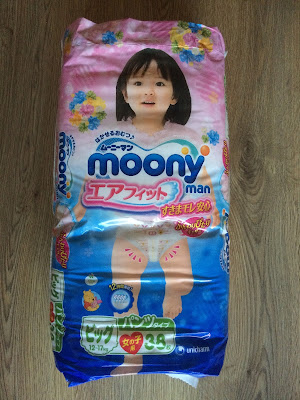 I opened the packet and my first initial thought was how soft they were to touch. They have a real silky feel to them and they were definitely the softest nappies I had ever felt. They were also really stretchy and looked like they would be quite nice to wear. The design was also really nice. It was pink and orange and it had Winnie the Pooh characters on though I must admit this is not something Lily takes much notice off. For me though I do quite like seeing her in pink nappies as her current brand is a blue design.
The nappy also had handy yellow lines that are indicators to show when the nappy is wet and turns blue when it is. I'm not sure the yellow lines are something I would use now as I'm so used to just feeling when the nappy is wet. But for a new mum these could be a great help to know when to change a nappy. 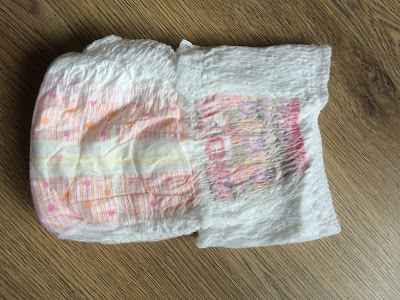 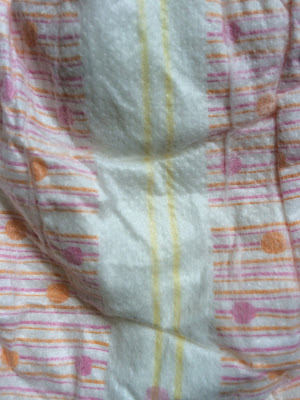 When it came to putting them on, I did actually reach for the nappy pack to see which way they went. With designs being on the front and back it wasn't to clear to me. As the pack was all written in Japanese I went by the photograph and put the correct pattern to the front. I noticed that the nappy had a little plastic tab on the back and to begin with wasn't quite sure what it was for. My guess was to close the nappy up after it was used. If that's not what it was for then that what I have been doing with it and found a useful purpose for it.

So we have been using these nappies for a week now and I must say I really do like them. Lily has never wore pull ups before so for my first try of pull ups it was definitely a positive one. The fact that they are so stretchy meant that they are easy to get on and off when it comes to using a potty but the sides also rip so then you can change her laying down and makes it easier for when they have done a poo.

I can't ask Lily as she is to young to tell me but my guess is that she found them very comfortable. With her usual brand at times I do find her pulling at her nappy like its annoying her but with these she hasn't done that once. The stretchiness means that they are great for her to be able to move around in.

I also really liked the fact that they looked really neat under clothing and they weren't bulky and didn't sag down. You could barely tell she was wearing a nappy it looked that neat. 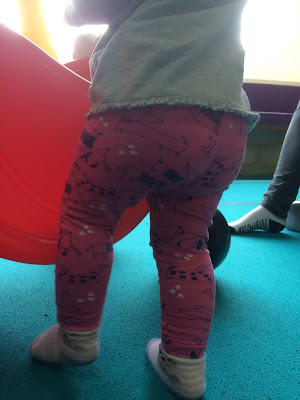 I can happily report that there hasn't been a single leak either. Which is definitely a plus. These really are the nicest nappies I have tried.

I would love to buy these on a regular basis as it ticks all the boxes for me. All apart from one. Affordability. To me they are to expensive for my budget at just over £20 a pack. We go through a pack of 44 in about 10 days and so that's £60 on nappies a month and we wouldn't be able to afford it. Which is a shame.

If you would want to buy some of these nappies though you can find out more on the Japanese Nappies Website. If you would love to give them a try first then here is your chance, as we have a pack to give away from them. Enter below on the Gleam app.

Win a pack of Moony Nappies

1 Winner
Uk Only
All incomplete entries will be disqualified
Prize Sent by company
14 days to claim prize
Posted by LilysLittleLearners at 12:07